At any point in the last few years, Nigeria’s naira has always had multiple exchange rates.

As of Friday (Nov. 27), the parallel market rate was 24% higher than the investors window rate provided by the country’s central bank and that was, in turn, 2% higher than the Central Bank of Nigeria’s official rate.

The divergent rates have long been a striking feature of Nigeria’s economy but more so in the last half decade as the country’s financial authorities have attempted to micro-manage the supply of foreign exchange and “defend” the naira.

The recent push stems from monetary policy trends in 2016 when, amid a recession, Nigeria’s government stubbornly refused to devalue the naira despite a widening gap between official and black market rates. And, when it eventually did, it turned out to be a managed float as it simply moved the currency’s value from one peg to another.

But with the proverbial genie out of the bottle, the past five years have been a never-ending experiment on how to manage a currency crisis of varying proportions. Things reached a head last week when Godwin Emefiele, Nigeria’s central bank governor claimed the parallel market rate “cannot be the basis” to determine the naira’s real value. Emefiele’s argument included describing parallel markets as “illegitimate” and “shallow.”

Yet, with the parallel market rates not fixed by the central bank unlike others, black market operators often deliver a more accurate verdict on the levels of the supply, demand, and prices of the dollar.  While it’s difficult to capture the exact size of the parallel market, what’s clear is that “it plays a significant role that interprets the true value of the greenback to the common person in the economy,” says Oghenefejiro Eduviere, Lagos-based foreign exchange trading associate at African currency broker, AZA.

The naira, which started the year at around 360 naira to the dollar on parallel markets, is now on the verge of crossing the psychologically important “red line” of 500 naira. 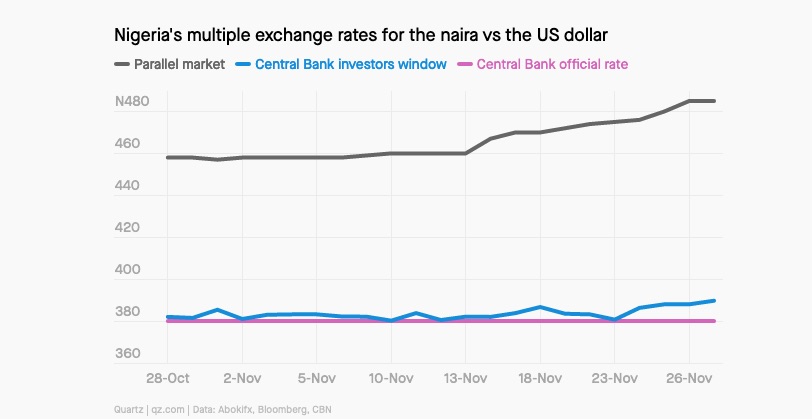 To be clear, a high black market exchange rate is terrible for import-dependent businesses that cannot access foreign exchange from official government channels given existing restrictions. As such, a recourse to black market operators is done only out of necessity on the back of the government’s ongoing currency policies.

It’s a curious situation that continues to stump analysts who advocate for more flexibility on the part of the government to mitigate the ongoing effects of its currency policies. But, as many have found, in government circles, conversations about the naira’s exchange rate appear to be more focused on political optics than economic expediency.

Given its obvious utility amid the central bank’s policies, Eduviere says Emefiele’s comments disparaging the parallel market may have been in a bid to discourage speculative buying as well as “restore confidence in the market and reassure foreign investors that their assets are safe.”

Yet those comments are unlikely to reduce pressure on the naira. “It will not be surprising to see further depreciation in the parallel market as we approach the festive season,” says Janet Ogunkoya, senior research analyst at Tellimer Research.

As it turns out, increased dollar demand through the Christmas season is a prospect that could yet bring an even more unpalatable economic reality for the Nigerian government. A 7% increase in current black market exchange rates will mean Nigeria’s monthly minimum wage amounts to $58 or $1.87 per day—a figure that’s below the current United Nations international poverty line.

How Ethiopia is undermining the African Union

‘Our imagination was violated’: France to return...