Police in New York City on Wednesday released surveillance video showing a woman tackling a Black teen she accused of stealing her phone in a viral incident that has prompted calls for the woman’s arrest.

The video, posted Wednesday by NYPD Chief of Detectives Rodney Harrison, shows a woman tackling a person, identified as Keyon Harrold Jr. The young man – the 14-year-old son of jazz musician Keyon Harrold – tries to get away from the woman before they both fall to the ground.

The video ends with a close-up of the woman’s face with the caption, “Wanted.”

“On Saturday, December 26, the woman in this video falsely accused an innocent 14-year-old teenager of stealing her cellphone,” Harrison tweeted, along with a call for help locating the woman. “She then proceeded to physically attack him and fled the location before police officers arrived on scene.”

On Saturday, December 26, the woman in this video falsely accused an innocent 14-year-old teenager of stealing her cellphone. She then proceeded to physically attack him and fled the location before police officers arrived on scene. pic.twitter.com/qtZZWetBWH

Police said the woman has been identified, but did not release her name. The incident is not being investigated as a bias incident, an NYPD spokesperson said in a statement.

The elder Harrold posted his own video of the incident to his Instagram page. His video, which is about a minute long and has been viewed more than 2 million times, shows a woman demanding a young man show her the phone he’s carrying. She repeatedly insists it is her phone.

The confrontation took place at Arlo SoHo hotel in Lower Manhattan, according to Harrold.

“Are you kidding me? You feel like there’s only one iPhone made in the world?” Harrod can heard saying in the video.

A man who says he’s the hotel manager says he’s trying to “settle the situation.”

The increasingly irritated woman demands to be shown “proof” the phone the younger Harrold is carrying is his – Harrold refuses. The woman also says she won’t let Harrold and his son leave. The video cuts away as the camera shakes and voices are raised. 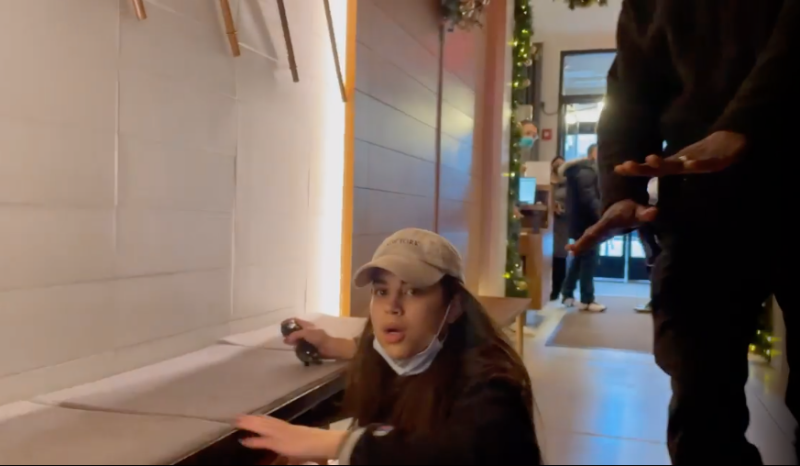 “There are thousands of Black men sitting in prison who have been falsely accused,” Harrold told the Associated Press. “That’s why we have to address incidents like this now, before they become life altering, life impacting issues that negatively and devastatingly affect Black people.”

The woman gave her side of the story to CNN. She told the outlet she was assaulted during the incident, a claim CNN was unable to verify, and that she was willing to cooperate with the investigation. The 22-year-old woman also told CNN she’s willing to speak with Harrold.

Civil rights attorney Ben Crump called for the woman to be held accountable. In a statement, he and the Harrold family called for Manhattan District Attorney Cy Vance Jr. “to bring assault and battery charges against this woman to send the message that hateful, racially motivated behavior is unacceptable.”

Crump on Thursday said the Rev. Al Sharpton arranged a meeting between himself, Vance and Harrold Jr.’s parents “to discuss next steps for getting justice.”

“As this year of racial awareness is drawing to a close, it’s deeply troubling that incidents like this one, in which a Black child is viewed as and treated like a criminal, continue to happen,” Crump said in a Monday statement.

He added, “Compounding the injustice, the hotel manager defaulted to calling on 14-year-old Keyon to prove his innocence, documenting that we have two justice systems in America and that Black people are treated as guilty until proven innocent.”

A spokesperson for Manhattan District Attorney Cy Vance said office is “thoroughly investigating this incident” in a emailed statement to USA TODAY.

Arlo Hotels posted a statement to Instagram apologizing to Harrold and his son and saying it was investigating the incident and that “more could have been done to de-escalate the dispute.”

“No Arlo guest – or any person – should be subject to this kind of behavior,” the hotel said.

New York City Mayor Bill de Blasio shared a news article about the incident and tweeted “This is racism. Plain and simple.”

A white policemen -Not wearing mask, who wrongfully detained an Innocent Black man may have exposed the victim to COVID-19, his fiancée said

Juneteenth Is Not yet a Legal-Paid State...