Bloody news from April laid me low—murders worse than senseless, purposeful slaughter of the sort my country seems to reserve for my people, black Americans. The murders hadn’t occurred in geographical or temporal proximity. They were in the Midwest, Upper South, and Deep South. One had been concealed for weeks, none of the perpetrators had been punished. The murders of George Floyd, Breonna Taylor, Ahmaud Arbery, Eric Garner, Trayvon Martin, Michael Brown, and the needless loss of Sandra Bland, were themselves hard to stomach. Worse was their terrible inevitability, a never-ending history of carnage defined by Emmett Till’s nauseating sacrifice to white supremacy in 1955. An old anguish bound me to these most recent victims.

Then all across the country, Americans rose up for George Floyd, in Black Lives Matters protests against police brutality and Confederate statuary that spread to other countries, where multiracial protestors tore down emblems of colonialism and the Atlantic slave trade. Insurgent masses filled the streets—city streets, suburban streets, little white country town streets, even roads in my outdoor tourist playground of the Adirondacks. The images of protest were glorious, and some took me by surprise by giving me pleasure.

From my hometown of Oakland, California, there came photographs of Brianna Noble on her huge, seventeen-hand horse, Dapper Dan, leading protesters and bearing a Black Lives Matter sign. Noble knew what she was doing, saying, “No one can ignore a black woman on top of a horse.” Her image reappeared nationally, internationally, as above the caption, “Aktivistin Noble bei einer Demonstration gegen Polizeigewalt in Oakland,” in Germany’s Der Spiegel news magazine.

Additional photos of black demonstrators on horseback from Los Angeles and Houston quickly followed, along with quotes from the Compton Cowboys and Cowgirls confirming their decades-long history. There’s even a Federation of Black Cowboys in New York city, founded in 1994, at the border between Brooklyn and Queens.

Most Americans don’t know the history of black cowboys, even though in the heyday of cattle drives from Texas to Midwestern meat processors, black cowboys represented about a quarter of the workers on horseback. After railroads replaced overland cattle drives early in the twentieth century, black cowboys like Nat Love and Bill Pickett turned to the rodeo circuit, where you’re most likely to encounter professional black cowboys and cowgirls today. Cleo Hearn founded the American Black Rodeo Association in 1971, which became the more inclusive Cowboys of Color in 1995. In 1984 Lu Vason founded the annual Bill Pickett Invitational Rodeo, named in honor of the turn-of-the-twentieth-century inventor of rodeo bulldogging, or steer wrestling. The Oakland Black Cowboy Association is nearly half a century old. Black rodeos are far older than Lil Nas X’s blockbuster hit “Old Town Road,” but the hit record broke color barriers in country music and stirred curiosity about black cowboys.

An attraction to black people on horseback is something I share with millions of others, as an expression of this moment’s protests, and perhaps, I dare add, of hope. There’s more, though, for me, as my antiracist solidarity turned intensely personal. Black Lives Matter photos of black people on horseback brought my autobiography to the surface of my consciousness, as images elicited a memory of my late father.

When I was a girl in the fifties, my father would take me horseback riding in San Pablo, which was still totally rural at the time. For him, these outings recalled the joy of boyhood, riding his own blue roan horse in rural Spring, Texas. Both my parents were Texans, united early on by their determination to leave Texas’s mean-spirited segregation. In Oakland they brought me up as a Californian, never sending me back to Texas for summers to reinforce my Texan roots. Of course, there were their old friends, also migrants from Texas and Louisiana, their love of certain foods—crab gumbo, head cheese, Texas-style barbecue, and tamales—but little else to make me identify with Texas. Like my mother, I was bookish as a girl. But for my father and me, horseback riding was every Saturday’s treat. 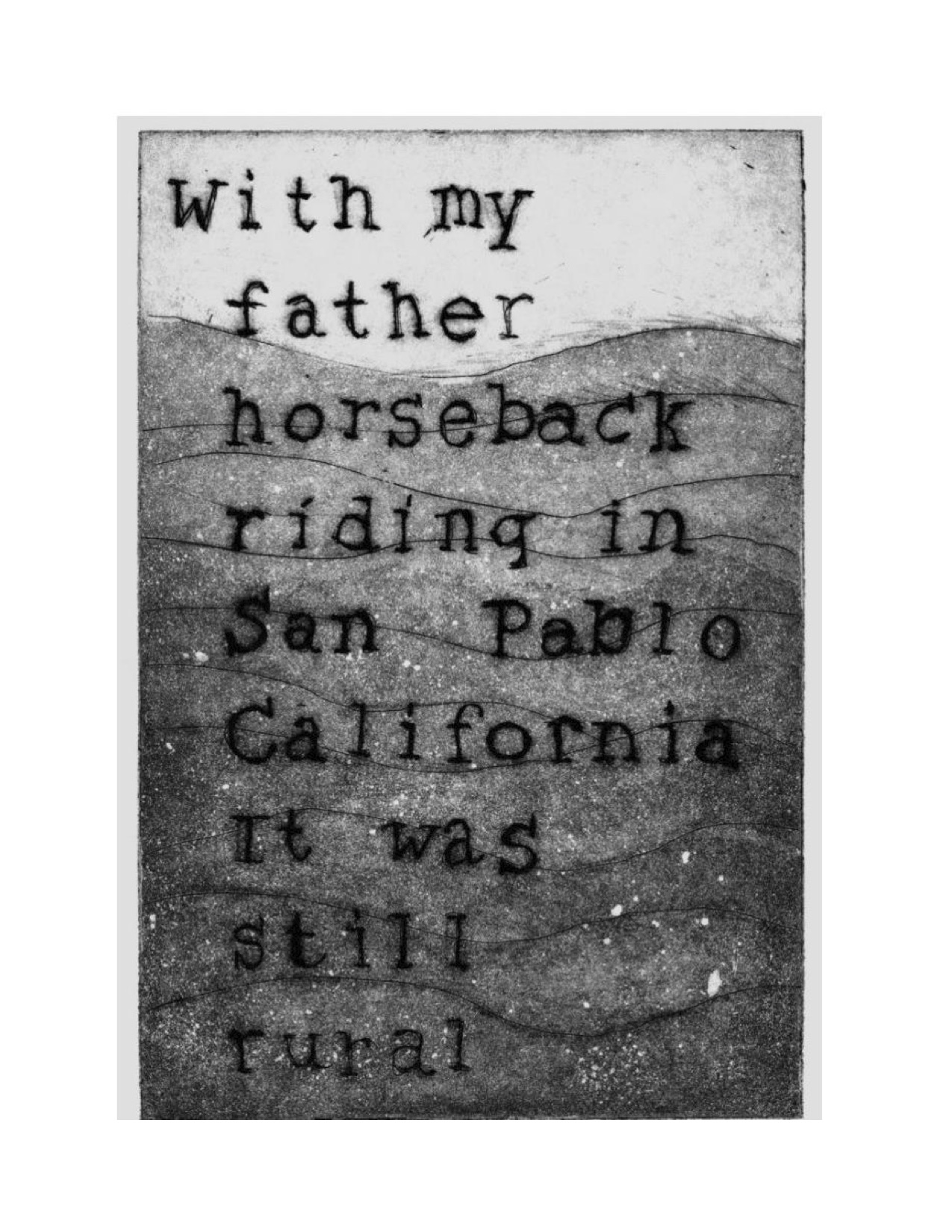 In art school many years ago I made an intaglio, dry point, and aquatint print about my horseback riding. And then, I once again forgot my tie to this Texas of the West and to my father’s equestrian identity. My claim on this Western identity has been something I barely feel, for simply being black imposes a sectional identity that is Southern. Since my youth, a generation of immigrants has added the Caribbean and Africa as places of recognizable black roots. But the West? Not much. Texas is Western, but the blackest part of Texas in historical memory is Juneteenth, the folk holiday (on its way to official recognition) commemorating the 1865 date when Texans learned of their emancipation. When my parents’ Texan origin comes to mind, I usually think Texas = South. Yet horseback riding is Texas = Western. No matter where they were born, the legendary black cowboys of history, of cattle drives and rodeos, came out of Texas.

For me now, to recall my father on horseback, my father as a cowboy, is to reclaim my own personal San Pablo–Californian–Texan past. My reawakening faces down the whitewashed history of Americans—Native Americans as well as African Americans—on horseback. Like so many facets of U.S. history, cowboy history has been lily-whited-out, via the movies’ exaltation of the cowboy as a white man.

In so many ways, too much of U.S. history reads as a story of white men. This is about to change. Although the current upheavals have begun with reforming policing, that’s only a start. History is being remade, including the history of the West. This new history, visualized in images of black women and men on horseback, brings me into more personal, more intimate connection with the political protests that demand wide-ranging, far-reaching improvements in our national life. If the United States can move away from institutional racism and police brutality, millions of my fellow and sister citizens will savor their own complex identities within the comradeship of the community.

Nell Painter is the author, most recently, of Old in Art School: A Memoir of Starting Over and The History of White People.

Some states revert to restrictions as virus cases surge