Harris argued that the Trump administration’s mismanagement of the coronavirus pandemic left an American dying every 80 seconds, 16 million people out of work and millions of children unable to return to school – and no confusion about how to vote Nov. 3.

“The case against Donald Trump and Mike Pence is open and shut,” Harris said. “Just look where they’ve gotten us.”

Biden began his speech by mentioning the campaign set a single-day record for online fundraising after announcing Harris as his running mate. “I think I know why,” he said, turning around to look at her.

Biden said Harris was a tough legislator who fought big banks and energy companies as attorney general. As the child of immigrants from Jamaica and India, she is an inspiration to young girls of color waking up this morning, Biden said.

“Today just maybe they’re seeing themselves for the first time in a new way as the stuff of vice president and president,” Biden said during his speech.

As Biden spoke, Harris sat off to the side – he noted they were practicing social distancing – looking at him and nodding in agreement. The event in a high school gym with a couple of hundred supporters outside the school left an eerie silence after the speeches and a lack of the applause common to political speeches. Both campaigns are in uncharted territory about how to campaign remotely with social distancing during the pandemic.

“I wish we were able to talk to the folks outside, but we’re keeping our social distancing and playing by the rules,” Biden said.

Harris described how her parents met while marching for justice in Oakland, where they would take her along on protests strapped in her baby stroller.

“I devoted my life to making real the words carved into the United State Supreme Court: Equal justice under law,” the senator from California said.

Harris also spoke at length about Biden’s son, Beau, who she was close to and who died in 2015 from a brain tumor.

“Beau was the kind of guy who inspired people to be a better version of themselves,” she said, as Biden sat nearby with his head down. The former vice president has said Beau should have been the one running for president eventually, and that he carries his son with him.

“His empathy, his compassion, his sense of duty to care for others is why I am so proud to be on this ticket,” Harris said of the elder Biden.

Biden repeated the message from when he declared his candidacy with video footage of white nationalists protesting in Charlottesville, Virginia. He recalled his father telling him, “Silence is complicity.” At that moment, hearing Trump say that there were “very fine people” on both sides of the protest, Biden decided he had to run to unseat him.

“I knew we were in a battle for the soul of the nation,” Biden said. “I’m proud to have Sen. Harris at my side in that battle.”

Trump’s campaign said the president condemned white nationalists in Charlottesville after the comment that Biden cited.

“I’m not talking about the neo-Nazis and the white nationalists — because they should be condemned totally,” Trump said Aug. 15, 2017.

Biden and Harris took the stage shortly before 5 p.m. EDT at a high school near Biden’s home in Wilmington, Delaware. The pair spoke for about a combined half-hour and took no questions. They were joined by their spouses after completing their statements and then left the gym. 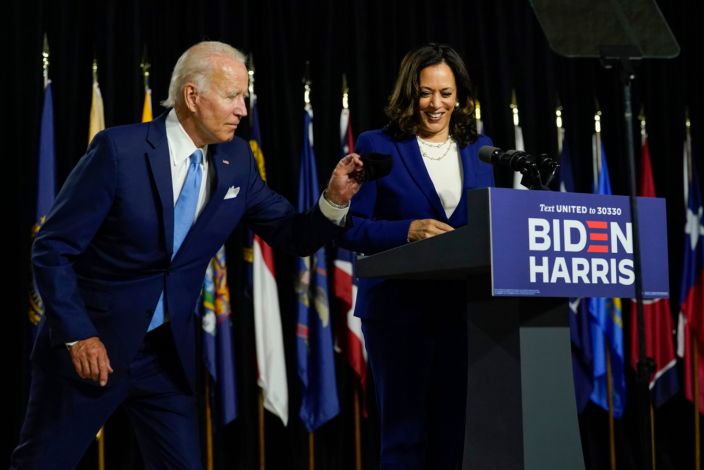 Biden complained that Trump hasn’t met with congressional leaders to negotiate another stimulus bill, even as he faces leaving office with the worst jobs record in American history.

“Donald Trump is on the golf course,” Biden said. “He hasn’t even met with the leadership. He doesn’t have the time, it appears.”

Harris said the country faces the worst public health crisis in a century and that the president’s mismanagement plunged the country into the worst economic crisis since the Great Depression.

“This is a moment of real consequence for America,” Harris said. “It’s all on the line.”

“America is crying out for leadership, yet we have a president who cares more about himself than the people who elected him,” Harris said of Trump. 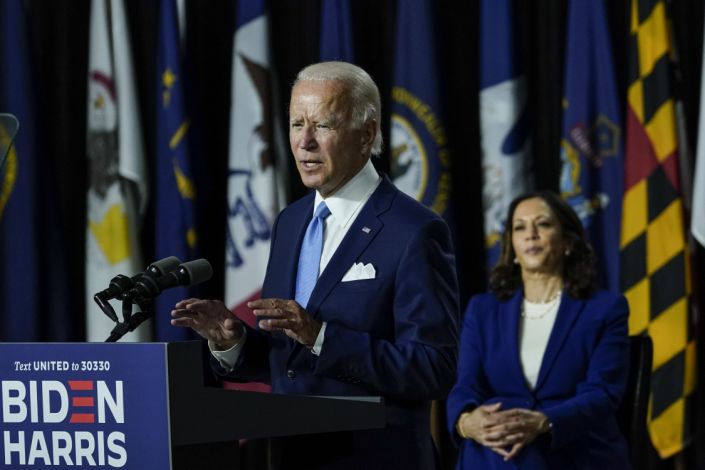 Biden tweeted Wednesday that Harris “never shies away from fighting tooth and nail for what’s right,” whether against big banks or supporting marriage equality.

“It’s why I chose her to be my running mate,” Biden said. “She’ll wake up every day thinking about how to make life better for the people of our country.”

After the speeches, Harris will join Biden for a virtual fundraiser designed to let contributors see the pair together. Harris is a landmark candidate as the first Black woman and first Asian American woman to appear on a major-party ticket. Biden’s campaign raised nearly $11 million in four hours Tuesday after the choice was announced.

Harris brings the political experience of winning statewide election in the largest state while also personifying the diversity that key Democratic activists have said is crucial to building grassroots enthusiasm for the ticket.

“I asked Kamala to be the last voice in the room, to always tell me the truth, which she will, to challenge my assumptions if she disagrees, to ask the hard questions,” Biden said. “That’s the way we make the best decisions for the American people.”

Sen. Tim Kaine of Virginia, who was Democratic nominee Hillary Clinton’s running mate in 2016, said amid the 100th anniversary of women winning the right to vote that the country is good at many things, but not at electing women to high office. With women representing only 24% of Congress, Kaine said the U.S. trails Iraq, Canada, Mexico and many other countries.

“I can think of nothing better than a woman breaking the glass ceiling whereby no woman in this country has ever been a vice president or president,” Kaine said on the Senate floor Wednesday. “This is a good day, I believe, for the country and a good day for the Senate when one of the 100 is recognized in such a way and introduced to the American public with an opportunity to serve at a significant level.”

“She’s been the center of the most critical national security challenges the country faces,” Biden said in his speech Wednesday.

Harris was a prosecutor in San Francisco and state attorney general before winning election to the U.S. Senate in 2016. She serves on the Judiciary, Intelligence, Budget, and Homeland Security and Governmental Affairs committees.

She joins a Biden campaign that has sought to unify factions of the party against Trump, after a contentious primary season that knocked out Harris before voting began. More progressive rivals to Biden, such as Sens. Bernie Sanders of Vermont and Elizabeth Warren of Massachusetts, vocally supported the selection of Harris.

3 WHITE POLICE HARASS AND ARREST A...