Last Saturday around 2 a.m., a pair of deputies in a tiny California city responded to a report of domestic violence at an apartment complex.

But instead of finding the 911 caller or their alleged suspect, the cops tased, pepper-sprayed and beat a Native American man and shot and killed his dog.

The disturbing encounter, captured in bystander video and body cam footage released by the Inyo County Sheriff’s Office, has sparked outrage and divided residents in Bishop, a city of about 3,700 people near the Nevada border.

George Barlow, 32, was at an empty gas station on the Bishop Paiute Reservation when one of the Inyo County deputies first approached. The sheriff’s own narrative of the incident reveals Barlow wasn’t even their suspect. “While looking in the area, the deputies noticed a male subject across the street at the Chevron station, which was closed; the subject was agitated and yelling,” a press release states.

On Monday, the sheriff’s office released body cam footage of the shocking episode, which put Barlow in the hospital. (Warning: This footage includes images of police beating Barlow and shooting his dog to death.)

According to cops, Barlow charged at a deputy, refused to follow commands, and grabbed one deputy’s baton—all of which the body-cam footage backed up. But police also claimed that the dog, a pitbull, was shot after Barlow ordered it to attack, and there were no audible commands of that nature in the footage released by police.

They’ve charged Barlow with crimes including obstruction/resisting officers, threatening criminal intent, assault with a deadly weapon non-firearm, violation of parole, and battery on a peace officer.

Footage of the incident released by both cops and a bystander on social media seems to show the situation wasn’t so clear cut.

Inyo County District Attorney Thomas Hardy told The Daily Beast the charges against Barlow have not been referred to his office. “It’s my understanding that the sheriff has an active investigation into Mr. Barlow, but it has not been referred over,” Hardy said.

Hardy is investigating the two deputies for possible crimes related to excessive force, however. “It is our highest priority right now,” Hardy said, adding that he’s received numerous emails from citizens demanding accountability. “But it’s more important to be thorough and accurate than to be fast. That being said, I hope we will have it wrapped up in a few weeks instead of a few months.”

To Barlow’s family and supporters, the incident is another reminder of what they view as law enforcement’s brutal treatment of Indigenous residents.

“This has not only been extremely devastating to George’s loved ones; but it has devastated our entire tribal community. This situation weighs so heavy on the hearts of so many people in our community… Many people do not currently feel safe on our own reservation & unfortunately, the ICSO is who we have to call on in an emergency,” Ciera Heavy Runner, a cousin of Barlow, told The Daily Beast.

“My cousin George ‘fit the description’ and because of that he is in the hospital on life support and his dog is dead,” another family member wrote on Instagram and on a GoFundMe page. “He was not the person in question.”

Barlow “did not deserve to be brutalized like this, nobody does,” the relative added on the fundraising site, which has raised more than $25,000 for Barlow’s medical bills and lawyer fees. “Law enforcement in Payahuunadü (the Owens Valley) has a history of brutalizing Native citizens and we receive little to no justice.”

One childhood friend of Barlow’s, Lina Sandoval, described him as “the biggest teddy bear” who had a smile on his face regardless of what heartbreak he was going through, including the loss of his mother. “Despite his big size, he’s not aggressive,” Sandoval told us. “That’s why this is so shocking and disappointing.”

“People in Bishop are trying to justify what happened because supposedly the dog was attacking the officers,” Sandoval added. “The dog is not seen in the video until the police are beating George.”

The Inyo County Sheriff’s Office’s 11 minute 41-second video of the incident shows the pitbull intervening and jumping up at the deputy as he tussles with Barlow, as well as the deputy shouting, “I’m gonna shoot your dog.” But the footage did not clearly capture the dog biting the deputies, though police said they “suffered dog bites.”

The video also includes audio of the 911 call that led deputies to the area. In it, a woman reports an alleged domestic violence incident around 2 a.m. at an apartment building on Tu Su Lane.

According to a police statement, the deputies didn’t find the caller and went to the Chevron station across the street. One deputy spotted Barlow, who according to police said, “Can I kill you too,” before charging at him. (Body cam footage reviewed by The Daily Beast does appear to capture Barlow saying, “Can I… you too,” though what exactly he is saying from across the parking lot is hard to make out.) 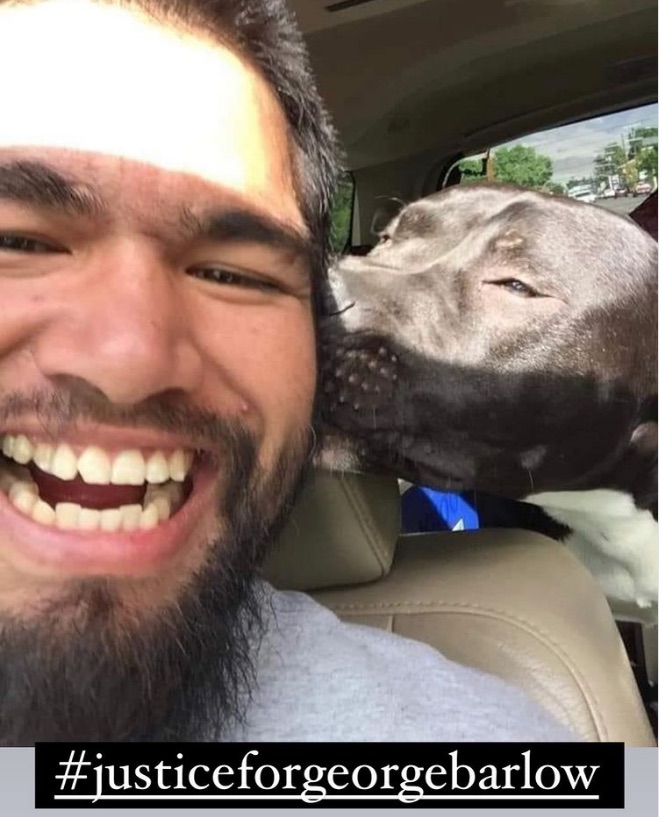 Authorities also confirmed the deputies then struck Barlow with their batons, but said that was done after two tasers weren’t effective.

The second deputy also pepper-sprayed Barlow, police say, and he dropped the baton and walked off. Barlow was arrested after the deputies deployed a sheriff’s K-9 to pursue him.

Although the body-camera footage confirmed some of the deputies’ claims about the encounter, it only raised questions about other things.

At one point in an officer’s body-cam video, Barlow’s hands were in the air and he was standing shirtless, away from the cops, and yelling, “Help” while a taser’s red laser marked his chest before one of the deputies deployed it. The officer deployed the taser as Barlow turned to walk away.

A video posted to social media that was captured by a bystander from across the street paints a murkier image of the incident.

In the social media video, Barlow can be seen on the ground while officers kick him as he appears to grip one of their batons and his dog runs in circles.

Questions also remain about the initial encounter between Barlow and the deputies that police say kicked off the violent chain of events.

In the first body-cam released by cops, a deputy can be seen approaching the gas station pumps and yelling “Yo” to Barlow, who responds with “Hi” before jogging closer.

“Don’t run at me, bro,” the cop warns, as Barlow runs toward him. “Back up, you’re gonna get tased.”

“What do you want?” Barlow asks as he runs toward the deputy and raises his arms in the air. “What are you fucking with me for?”

From there, the cop deploys the taser and things immediately escalate. At the point when Barlow’s dog is shot, it was near Barlow, the footage shows.

The second deputy then grabs his German Shepherd police dog from a truck and chases after Barlow. “Help me!” Barlow shouts after the police dog jumps at him and he falls to the ground.

“Stop resisting! You’re under arrest!” one of the cops can be heard yelling. The images are too dark to see, but Barlow’s screams can be heard along with the growling.

Police said Barlow was transported to the hospital “with one dog bite and multiple lacerations from the struggle, and the use of taser darts and batons.”

Footage from a third body cam, from a Bishop Police Department officer, showed Barlow lying naked in a pool of blood while the cops told him they were trying to render aid.

While Barlow’s condition is unclear, local radio station Sierra Wave published a photo of him with a breathing tube in the hospital.

Barlow’s family did not return messages from The Daily Beast seeking comment, but one relative posted to Facebook Monday with an update: “George had the tubes taken out!!! He is breathing on his own with medication as well… his voice is a little raspy, probably from the tubes, but I hear he is in good spirits!!!”

On Tuesday, according to the Sierra Wave, friends and relatives demanded an investigation at a meeting of the Inyo County Board of Supervisors.

“What would you do if George Barlow was your son? The whole community is your family,” said one person identified as Roger Barlow.

The board chair replied that “legally we can’t discuss” the matter. Sheriff Jeff Hollowell then told the crowd that his agency hired an independent firm to conduct an investigation, which should take about three weeks.

“He wasn’t a threat to anyone, he did not deserve this,” she said.

Ciera Heavy Runner, Barlow’s cousin, said he is currently “on life support” and facing a “long road to recovery.”

“George has never been afraid to tell his family & friends that he loves them. We all love George tremendously & are completely heartbroken that he had to suffer through such a severe beating by the two deputies from the ICSO.”

U.S. Capitol locked down after a vehicle...