written by By Bukola Adebayo,CNN August 1, 2020

A Nigerian mother and her quadruplets remain in Dubai because of coronavirus travel restrictions that have prevented them from traveling home, her husband told CNN.
Tijani Abdulkareem, 32, said his wife, Suliyah, 29, gave birth to the babies — two boys and two girls — on July 1.
The couple, who live in Dubai, began making plans to relocate his wife to Nigeria to give birth when they found she was having quadruplets in January.
They share a hostel accommodation with others, and it would have been difficult to rent a bigger place with their combined income, according to Abdulkareem, who works as a cook at a restaurant in the city.

But the government banned all commercial international flights when the pandemic struck in Nigeria in March, shortly after it recorded its first case.
Only diplomatic and essential flights are currently permitted into Nigeria’s airspace and Abdulkareem says the travel restrictions, had frustrated their plans.
Although repatriation flights to Nigeria from Dubai are taking place, they are few and far between.
Abdulkareem said the couple hoped that the travel restrictions would ease ahead of her planned departure to Nigeria in May, a few months before her August delivery date.
“We thought the travel situation would improve … but the lockdown made it difficult to get flights,” he said. 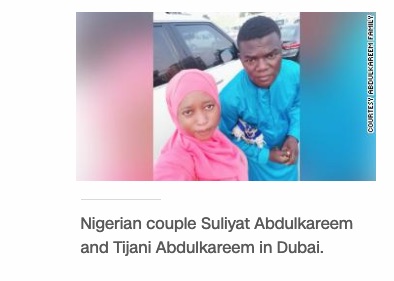 While they were still making arrangements for her travel to Nigeria, Abdulkareem said his wife went into premature labor and had the babies via an emergency C-section at the Latifah Women and Children hospital in Dubai.
The babies’ early arrival has also unsettled the couple’s finances.
Abdulkareem said his wife stopped work as a hospital cleaner some months ago and their meager income was not enough to get health insurance.
The family has incurred thousands of dollars in medical debt since the babies were born and the bill is mounting as doctors say the quadruplets may remain for another six weeks at the hospital before they can go home, Abdulkareem said.

The couple owe around $120,000 and are incurring daily charges of $5000 to keep the babies in separate incubators.
The father told CNN they have been relying on the goodwill of the hospital and the generosity of the Nigerian community in Dubai. “The hospital has really helped us.
They discharged my wife and are doing all they can to ensure that the babies are doing well. The Nigerian community has also been like a family to us,” Abdulkareem said.

‘It is still a miracle’
The community, with contributions from some UAE residents and other nationals who read the news on local media, have been able to raise (AED) 30,000 (around $8000) to pay part of the family medical bills, Abdul-Hakeem Anifowoshe, a member of the diaspora community in Dubai told CNN.
They have also secured rent for two months at a bigger apartment for the couple for when the babies are discharged from the clinic, Anifowoshe said.
“We’re keen on ensuring the family gets ongoing support towards the welfare of the mother and the quadruplets even when they get back to Nigeria,” Anifowoshe said. 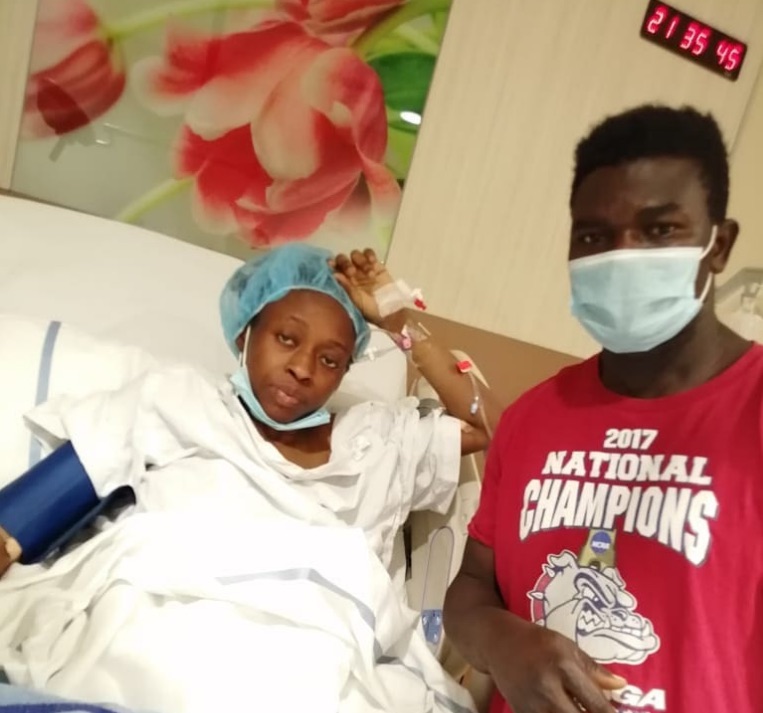 Chairwoman of the Nigerians in the Diaspora Commission Abike Dabiri-Erewa, whose agency has been evacuating citizens stuck abroad, said the country’s embassy in Dubai had contacted the family.
“The mission is on top of the matter and is in constant touch with the family,” Dabiri-Erewa said.
The new father says he’s anxious to resettle his family back in Nigeria where he believes there will be more family members to help out with caring for the babies. However, they may have to wait a little longer.
Nigeria’s airspace remains closed indefinitely to international travel, and authorities have not announced when commercial flights will resume.

caught getting groceries, washing their car, and walking their dog despite testing positive for the coronavirus

Russia is aiming for an approved COVID-19...