Two police officers in Kansas City, Missouri, have been charged with misdemeanor assault after a video surfaced of a transgender woman’s head being slammed on the ground during an arrest last year.

She said the case, which includes a cellphone video from a motorist who happened upon the May 24 confrontation, had to go to a grand jury because the Kansas City Police Department did not submit a “probable cause statement” that could have triggered standard prosecution.

“This case is particularly disappointing that my office was prevented from filing the charge independent of a Grand Jury,” Baker said in a statement.

Police Chief Rick Smith said in a statement to NBC affiliate KHSB, “There was no probable cause to conclude the officers broke the law.”

The case was submitted to the U.S. Attorney’s Office, the FBI, and county prosecutors as a matter of routine when civil rights violations are alleged, he said.

The pair was placed on administrative duty.

The officers’ lawyers released a statement through the police union in Kansas City: “They maintain that the force they used was reasonable under the totality of the circumstances. They vehemently dispute the basis of these charges and believe they will be ultimately exonerated in Court.”

Brad Lemon, president of the union, Fraternal Order of Police Lodge #99, said the woman, identified by prosecutors as Breona or Briya Hill, slammed her own head against the ground.

“The Department’s thorough and complete investigation immediately following the arrest definitely showed that the arrestee purposefully struck her head against the concrete and that the officer’s subsequent actions of controlling her head prevented the arrestee from doing additional harm to herself,” he said.

Hill was fatally shot in an unrelated incident in October, and a suspect in the case has been charged. 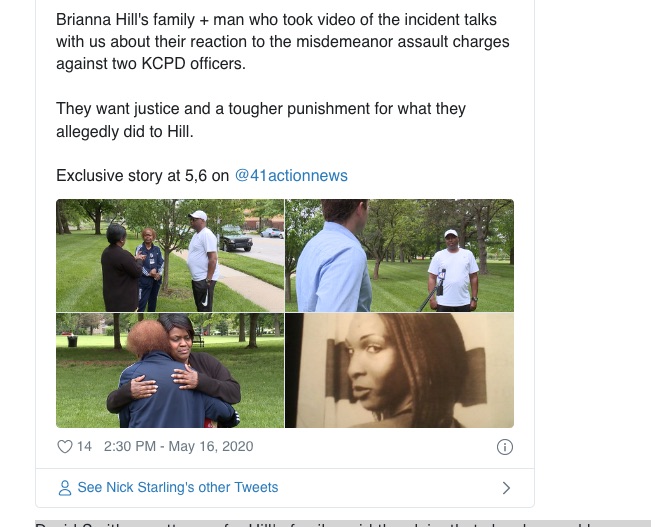 David Smith, an attorney for Hill’s family, said the claim that she slammed her own face into the ground was “the first brick in the wall of fraud they’re using to cover up the crime.”

The altercation started at a beauty supply retailer when Hill had a dispute with someone in the store and requested the owner call 911, the prosecutor’s office said. When the owner called, a request was made to have Hill removed, the office said in a statement.

Brummett and Prichard decided to arrest Hill, took her outside and put her on the ground, prosecutors said. She was hospitalized and booked on allegations of trespassing, disorderly conduct, resisting arrest and possession of drug paraphernalia, prosecutors said.

Photos of cuts and bruises to her face were released by a lawyer for her family, David Smith.

Video was shot by a motorist, identified as Roderick Reed, who stopped to record the incident.

He told prosecutors Brummett and Prichard kneeled on the woman as Brummett slammed her face into the ground twice and then placed his knee on her neck and back. Prosecutors said Hill can be heard expressing pain and asking for help.

Prosecutors said in their statement that some of the actions described by the witness and seen in the video were “in contrast to the officers’ statements” after the incident.

Audio from Reed’s recording captures Prichard threatening to take Reed’s phone as evidence and saying Reed is going to get “a ticket,” according to the charging documents. Reed was later cited for allegedly interfering with Hill’s arrest and blocking traffic.

The officers are scheduled to appear in court in August, and they face up to a year in jail.

‘Why Africa is least affected by deaths from COVID-19’

Letters to the Editor: You can’t separate...