“I think that systemic racism absolutely undermines public health and undermines the health of communities of color,” Leandris Liburd, associate director of the minority health office at the Centers for Disease Control and Prevention, told Yahoo News. “And we see that in the health inequities that are also part of this disproportionate burden experienced by communities of color” in the coronavirus pandemic, Liburd added.

COVID-19, the disease caused by the coronavirus, has killed 24,823 Black Americans across the United States, according to the COVID Racial Data Tracker, a joint project of the Atlantic magazine and an anti-racism institute at American University.

Recent weeks have also seen protests across the nation, following the police killings of several unarmed Black men and women. Some of President Trump’s supporters have denounced those protests on the grounds that they appear to violate the public health dictates in place since the pandemic arrived in the United States sometime in January.

Speaking to Yahoo News last week, Dr. Anthony Fauci, a prominent member of the White House coronavirus task force, said he was “concerned” that the protests could increase transmission of the virus.

Liburd, who has long focused on trying to address racial disparities, took a more nuanced view. “As a public health practitioner, I wouldn’t want to have to choose” between protesting against police brutality and taking steps to keep the coronavirus at bay, she told Yahoo News. “I think that they are both important.

“I don’t want to lose people to either,” she continued. “And I wouldn’t want to say that one is more important than the other.”

Police violence, Liburd said, “is exacting and it has exacted a trauma on the community that we have yet to really address.”

Liburd’s comments were made the same day that prosecutors in Atlanta, where the CDC is based, charged Police Officer Garrett Rolfe with the murder of Rayshard Brooks, a Black man, in the parking lot of a fast-food restaurant. Rolfe, who is white, has been fired from the department.

If people want to protest, Liburd said, they should do what they can to “minimize the spread” of the pathogen. “But we don’t know yet what the impact of protests [is] going to be,” she acknowledged. She said if protesters wore face masks and maintained social distance, they will have “minimized some of their risk.” 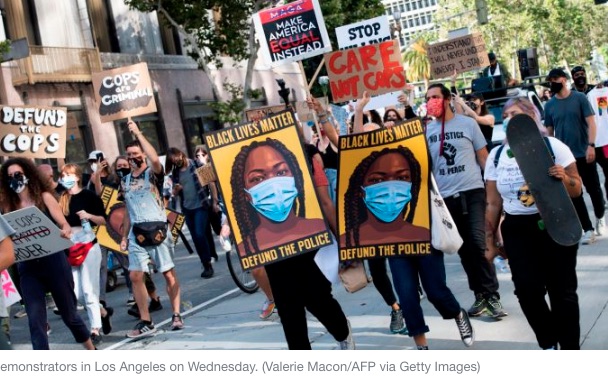 Use of face masks at protests across the country appeared to be widespread. In a number of cities, volunteers handed out face masks and hand sanitizer to demonstrators.

The impact of the coronavirus on communities of color has been disproportionate, and it has troubled many public health officials. Earlier this week, a major study of coronavirus cases in the United States found that Black and brown people accounted for more than half of all infections, though they account for well under half of the American population. (The study covered about 600,000 cases, or about 45 percent of those reported in the United States; the rest did not come with racial data attached.)

And on the same day that Liburd offered her thoughts on the pandemic’s racial disparities, a new CDC study found that of 220 patients hospitalized for COVID-19 in Atlanta in March and early April, 79 percent were Black, suggesting that Black people are contracting the disease more frequently and suffering from its effects more intensely. The authors also surmised that Black Americans were not being properly identified in outpatient clinics as suffering from COVID-19, thus unknowingly allowing the disease to persist without proper treatment.

“Additional research is needed to more fully understand the association between black race and hospitalization,” the study said.

Angela Davis: ‘We Knew That the Role of the Police Was to Protect White Supremacy’

Outrage as women confess how they use...