Portland mayor is booed by crowd, teargassed by agents as he tries to join protest

Portland Mayor Ted Wheeler joined the protests in Oregon’s largest city as demonstrators continued to clash with Department of Homeland Security forces deployed by the Trump administration near the federal courthouse.

It didn’t go well for Wheeler, who was hit by tear gas from the officers and jeered by the protesters. Demonstrators frustrated with his handling of the city’s police department and his belated show of support for the protests chanted “F*** Ted Wheeler” and called on him to resign. The protests have been occurring since late May following the death of George Floyd in Minneapolis. 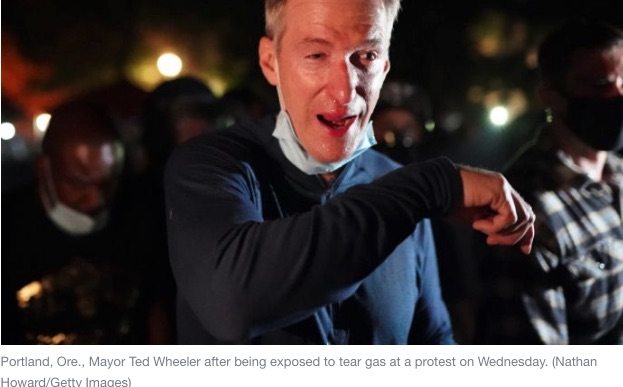 As Wheeler was being booed, he was also hit by tear gas.

“I’m not going to lie — it stings; it’s hard to breathe,” Wheeler, a Democrat, told the New York Times. “And I can tell you with 100 percent honesty, I saw nothing which provoked this response.

“A lot of these people hate my guts,” said Wheeler of the crowd, but he noted they were unified in their desire for the federal presence to withdraw, adding, “President Trump needs to focus on coronavirus and get his troops out of the city. My biggest fear is that somebody’s going to die. I want them to leave. This is going to come to a city near you if we don’t stop it.” 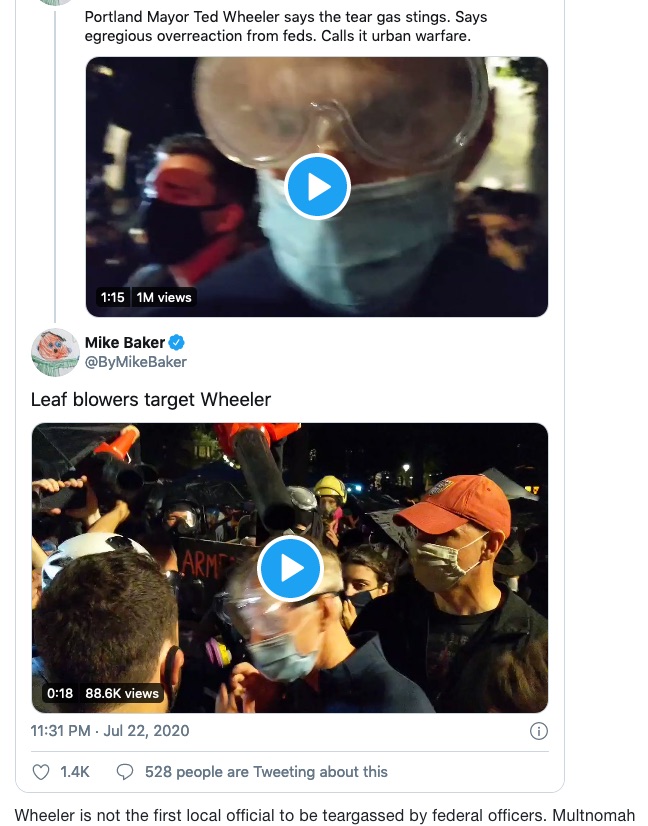 Wheeler is not the first local official to be teargassed by federal officers. Multnomah County Commissioner Sharon Meieran posted photos after she was among the demonstrators gassed over the weekend.

“I was there Saturday and Sunday, and the crowd was by and large very peaceful, chanting,” Meieran told Yahoo News. “And then out of the blue there was, the federal forces came out, and without any warning, without any discrimination of targets, just started throwing canisters of tear gas into the street.”

Earlier Wednesday, the Portland City Council passed a resolution barring the local police from coordinating with federal law enforcement, whose presence has been repudiated by everyone from city officials and the governor to the state’s congressional delegation and prominent national Democrats. 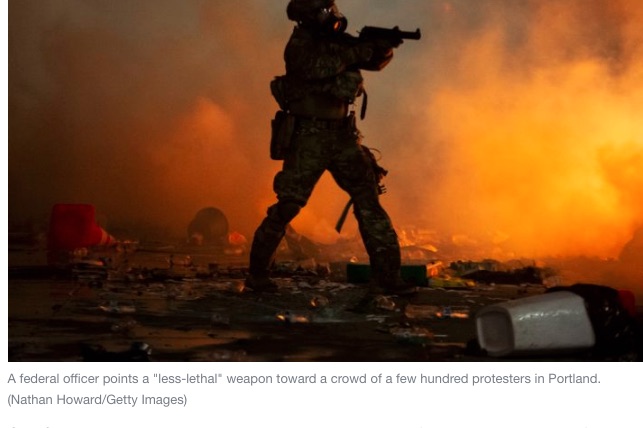 City Commissioner Jo Ann Hardesty has been critical of Wheeler’s handling of the police force and has asked control to be transferred to her.

On Wednesday, Hardesty claimed that fires in the area were “police action, and they’re sending saboteurs and provocateurs into peaceful crowds.” She did not provide evidence of these claims and later apologized.

Wheeler has repeatedly called for the federal presence to leave. Acting Department of Homeland Security Secretary Chad Wolf and others in the Trump administration say the presence is necessary to protect the city’s federal courthouse, criticizing local authorities for not doing their jobs.

The heavily armed federal officers in military camouflage uniforms have provoked outrage for fracturing the skull of one protester with a “less-lethal” projectile last week and for their frequent use of tear gas. Residents say they have witnessed the arrests of civilians who were taken away in unmarked vans, and a New York Times reporter said he was punched in the head by federal officers during Monday night’s demonstration. An attorney who was participating in the “Wall of Moms” protest early Tuesday morning claimed she was not read her rights while being arrested by federal officers. For their part, the protesters have spray-painted the federal courthouse, torn up fencing and set fires in the area. 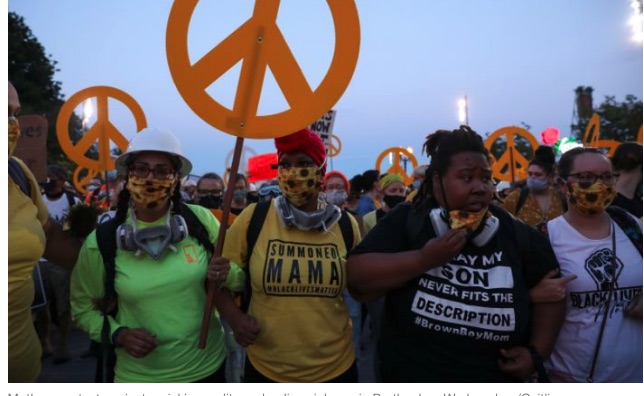 The crowd’s hostility toward Wheeler comes after the Portland Police Bureau has been criticized for its handling of far-right protests in recent years, as critics say the force generally sides with white supremacist demonstrators over local counterprotesters.

“You have far-right groups coming in from out of town and staging these riots, and the police were, objectively, acting more aggressively toward the community members coming out in protest of these far-right groups than the far-right groups themselves,” Michael German, a former FBI special agent and senior fellow at the Brennan Center for Justice, told the Washington Post.

On Wednesday, Trump announced he would be deploying more federal officers to Democratic-run cities in what the administration is calling “Operation Legend.”

“The effort [from local officials] to shut down policing in their own communities has led to a shocking explosion of shootings, killings, murders and heinous crimes of violence,” Trump said. “This bloodshed must end.”

Two former Republican leaders of DHS have criticized Trump’s use of the agency.

“The department was established to protect America from the ever-present threat of global terrorism. It was not established to be the president’s personal militia,” Tom Ridge, DHS’s inaugural chief, said during an interview with Sirius XM host Michael Smerconish. Michael Chertoff, who succeeded Ridge during George W. Bush’s second term, told the Washington Post that Trump’s plan is “unsettling” and damaging to the department.

“I guess if you have such a horrible record on dealing with the coronavirus, which is spiking all over the country, you say to yourself I’m not sure we can figure out how to get well there, [so] let’s go out and tell America that the people in these cities aren’t like them, don’t have their values, and they’re either anarchists or they are sympathetic to the anarchists,” said Wyden.

As Biden says four Black women are on his VP list, here’s who he could choose

Nigeria has confirmed an Italian man as...