Sidney Powell, the pro-Trump election lawyer who was cast aside by the US president’s legal team last month, has racially attacked the Republican senate leaders’s wife, Elaine Chao, whom she referred to as “China”.

Ms Powell shared a tweet featuring the racist slur, which said “Mitch IS married to China”, on Twitter on Wednesday.

The message had been written by another Twitter user, who said Republican senate leader Mitch McConell was “married to China” in apparent reference to Ms Chao, who is of Chinese heritage but was born in Taiwan.

The remarks were in response to a tweet in which Ms Powell condemned Mr McConnell, amid reports he had warned Republican lawmakers against challenging the presidential election results.

Speaking in a phone call with colleagues on Tuesday, the Republican said they should not reject the election results when they vote on 6 January, as Politico reported.

Donald Trump, who also alleged without basis that the election was rigged against him – months after labelling Covid-19 the “China virus” – also attacked Mr McConnell on Twitter on Wednesday, as the country’s most senior Republican broke away from the outgoing president.

“Mitch, 75,000,000 VOTES, a record for a sitting President (by a lot). Too soon to give up,” wrote the president. “Republican Party must finally learn to fight. People are angry!”

Mr McConnell had, on Tuesday, congratulated Joe Biden and Kamala Harris on becoming president and vice-president elect, as voted on by the Electoral College on Monday, some hours before Ms Powell and Mr Trump’s comments.

The Republican senate leader had not previously acknowledged the Republican president’s loss, amid multiple legal challenges – some pushed by Ms Powell – against election results in battleground states.

Ms Powell, who has challenged Mr Biden’s win in multiple lawsuits over the past month, was told on Tuesday that her claims in Michigan were “theories, conjecture and speculation” as judges in Georgia also rejected her case.

She then asked the Supreme Court to overrule Mr Biden’s victories in the two states, in an appeal submitted on Tuesday. It is not expected to be successful 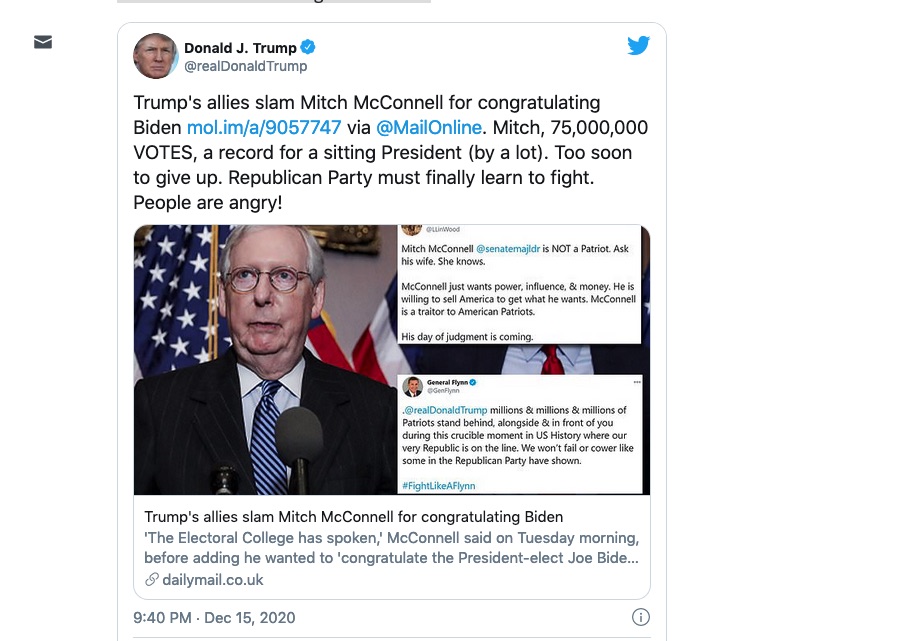