Protesters gather in Desert West Park on July 5, 2020, to demand information on and justice for a man Phoenix police shot and killed on the fourth of July in Maryvale.

PHOENIX — A protest was held Sunday night for a man who Phoenix police shot and killed in a driveway in Maryvale on Saturday.

About 30 people gathered at Desert West Park in Phoenix around 8 p.m. Sunday.

The Phoenix Police Department has not released the man’s name but both protesters and Phoenix City Councilman Carlos Garcia have said he was James Garcia.

“We are going to be out here until we get what’s right for James Garcia!” a protester yelled.

An officer fatally shot a man in the afternoon on the Fourth of July in the Maryvale neighborhood of Phoenix.

Officers were responding to a call about a man suspected in an aggravated assault last week returning with a knife, Phoenix police said Saturday. The caller pointed police to a home where the man was reported to be located. As officers approached the home, they found a man sitting in a car in the driveway.

Police told the man to get out of the car but he refused and instead displayed a gun, according to police. He ignored officers’ commands to drop the gun, and as he began to lift the gun, one officer broke the car’s passenger window to distract the man while two other officers fired into the vehicle, police said.

Phoenix Police Department spokeswoman Sgt. Mercedes Fortune told The Arizona Republic Sunday evening that she could not share much information but could respond to one claim circulating online.

“The suspect was not asleep in the vehicle, he armed himself which is what lead to the officer involved shooting,” Fortune said in an email

A video was circulating online appearing to show the shooting. It shows officers surrounding a car in a driveway while one officer yells through the driver’s side window not to move or that he will shoot. Seconds later, shots can be heard, and people nearby start yelling.

“It does not shock us that despite all the scrutiny from community Phoenix PD continues to respond violently to calls. But, we must all continue to ask for transparency and accountability,” Garcia wrote. “The department also issued a premature statement leaving out facts about the case. We cannot allow for dishonest narratives to be built by violent departments. We will continue to call for independent investigations into officer involved shootings.” 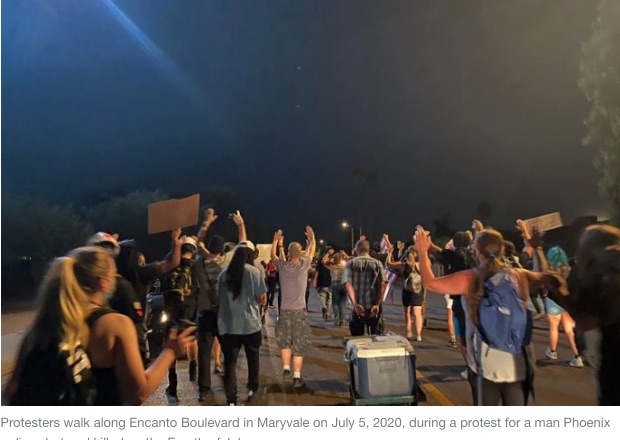 Garcia told The Republic that he is concerned about the lack of information on the shooting.

“The fact that it’s not clear who they went out there for was James himself and, by alluding to saying they were responding to something, it made it seem as if he was the one and, from what I can gather at this point, he was not the one they were looking for to begin with,” Garcia said.

“I do think continuing to see these cases should alarm everyone and should get everybody on the same page demanding accountability and transparency,” Garcia said.

Fortune, the Phoenix police spokeswoman, said anyone with video of the shooting should send it to police.

“This is an ongoing investigation and we would like to have anyone with information or video evidence to contact the Phoenix Police Department. These are complex investigations and any additional information will be looked into,” she said.

Local protest group W.E. Rising Project organized the protest in outrage over the shooting and to demand two officers’ body-camera video of the shooting be released.

There’s no state law dictating how long an agency has to respond to records requests, and some departments typically take weeks or even months to comply with records requests, often leaving the public and victims in the dark.

“He may have deserved to go to jail, but he didn’t deserve to die,” W.E. Rising Project volunteer Fe’la Iniko told the crowd at the park.

The group grew to about 50 people who marched towards the ​department’s Maryvale Estrella Mountain Precinct, where about 30 officers in riot gear blocked the building around 9 p.m. 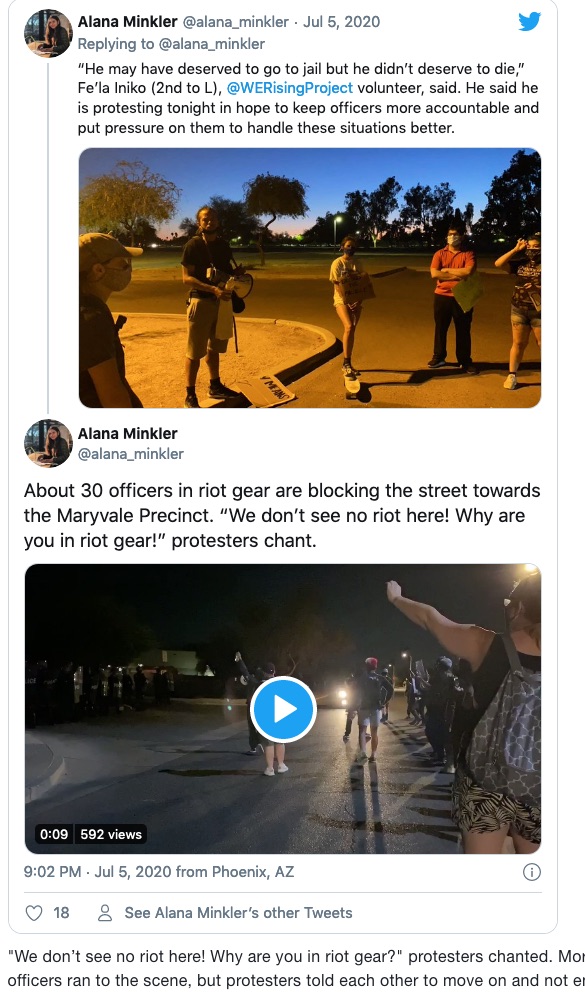 “We don’t see no riot here! Why are you in riot gear?” protesters chanted. More officers ran to the scene, but protesters told each other to move on and not engage.

Law enforcement officials have shot at least 24 people this year, according to information from the Maricopa County Attorney’s Office.

On Sunday night, protesters chanted “James Garcia” as they walked for miles under the moonlight and a helicopter’s light, avoiding lines of officers in riot gear by taking turns down other streets while trying to keep together.

By 10 p.m. the crowd headed back toward the park where the protest started but did not stop marching. By 11 p.m. police in riot gear lined up in the middle of the road while protesters linked arms and lined up in front of them.

A Picture they say is worth a...