The pregame festivities during Week 1 of this year’s NFL season are reportedly going to include a new song.

The NFL is planning to have “Lift Ev’ry Voice And Sing,” widely known as the Black national anthem, performed at its season openers this fall, according to ESPN’s Jason Reid. The song will reportedly be played before the “The Star-Spangled Banner.”

The NFL is also reportedly considering other measures for the season to recognize victims of police brutality. That could reportedly include listing names of victims on uniforms through helmet decals or jersey patches, as well as educational programs.

All of this comes after a notable shift in the NFL’s approach to racial inequality. NFL commissioner Roger Goodell made headlines when he stated “Black lives” matter and conceded the league was wrong for not listening to past player protests, a statement that came in response to a public demand from many of the league’s Black stars.

Much remains to be done if the NFL is serious about helping foster change. Colin Kaepernick also notably remains a free agent, though Goodell has said he encourages teams to sign the quarterback.

Several players — including Adrian Peterson, Baker Mayfield and Kyler Murray — have already signaled they will still protest racial inequality during the national anthem this season. 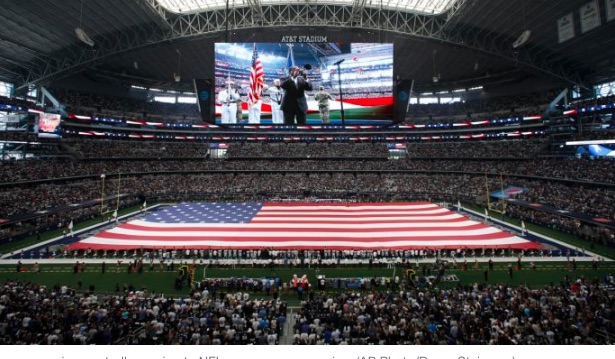 Approaches to national anthem amid pandemic have varied

As leagues slowly return to action amid the coronavirus pandemic, the NFL’s addition of “Lift Ev’ry Voice And Sing” to their season openers is one of a few ways leagues are handling the national anthem differently in the wake of the killing of George Floyd and subsequent protests.

After the vast majority of its players knelt while the national anthem was played for an empty stadium, the National Women’s Soccer League changed its policy to allow players to remain in the locker room while the song is played.

Major League Soccer has said it will take a different route by simply not playing the anthem, citing the lack of fans in the stands.

MLB and the NBA have not yet announced if they will do anything differently with the anthem when they return to action.

RACISM IS A FORM OF MENTAL ILLNESS. White Americans need to accept the Truth in order to adopt effective Treatments.