A former military commander in El Salvador, Inocente Montano, has gone on trial in Madrid accused of ordering the murder of six Jesuit priests in 1989.

He was alone in the dock on Monday. A man suspected of shooting the priests, ex-Lt René Yusshy Mendoza, is helping prosecutors as a witness now.

Two Salvadorean women – a housekeeper and her daughter – were also murdered.

Five of the Jesuit priests were Spanish. Salvadorean troops were fighting leftist rebels at the time.

Prosecutors believe ex-Col Inocente Montano, a former deputy defence minister, was part of a far-right group in the military responsible for atrocities and opposed to any peace deal with the Farabundo Marti Liberation Front (FMLN). 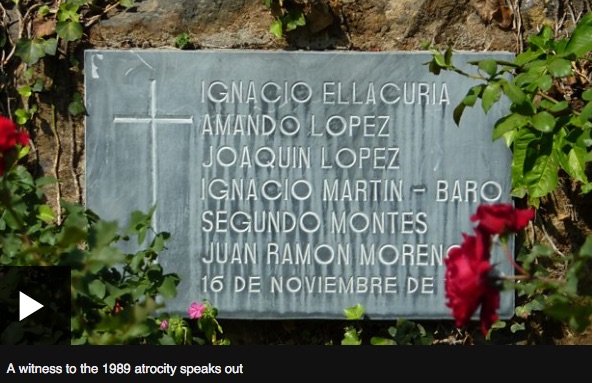 He was extradited from the US in November 2017, having been charged, along with other Salvadorean officers, by a Spanish judge in 2011. He has denied wrongdoing.

He had moved to the US in 2002 and was in jail there for immigration fraud and perjury when the Spanish extradition request was made.

One of the murdered priests, Ignacio Ellacuria, was rector of the Central American University (UCA) in the capital San Salvador and a leading figure in the liberation theology movement, which reached out to the poor of Latin America.

The priests and the two women were dragged from their beds early on 16 November, 1989, and murdered on the university campus.

In 1989 the civil war had escalated into street fighting between the FMLN rebels and the army in San Salvador.

Prosecutors are calling for 150 years in jail for Mr Montano, accusing him of having “given the direct order to assassinate the Jesuits”.

He is expected to make a statement in court on Wednesday.

Spain’s Efe news agency reports that Mr Yusshy, one of the alleged killers, has expressed remorse and is giving evidence to prosecutors in the case. He followed Monday’s proceedings from the El Salvador consulate and is to testify on 7 July.

According to a 1993 UN Truth Commission report, more than 75,000 people were killed during the 12-year civil war.

El Salvador refused to hand over to Spain other officers accused over the 1989 murder plot.

How the language of the Edo people of...

TULSA MASSACRE WAS NOT A RACE RIOT, IT...

Judge limits footage that family can see of...

She Livestreamed the Shooting of Peaceful Protesters in...

African Nations are setting examples for the rest...