US first lady Melania Trump has been filmed appearing to refuse to hold the hand of her husband President Donald Trump.

The footage, that was widely circulated on social media on Monday morning, was filmed on Sunday evening as they climbed down the steps of the president’s plane Air Force One.

In the footage, the president attempted to hold the first lady’s hand as they both left the aircraft, but Ms Trump seemingly moved her hand away from his.

The president then appeared to attempt to hold Ms Trump’s hand again, but the first lady moved it away, before he put his hand on her lower back as they walked down the steps in windy conditions. 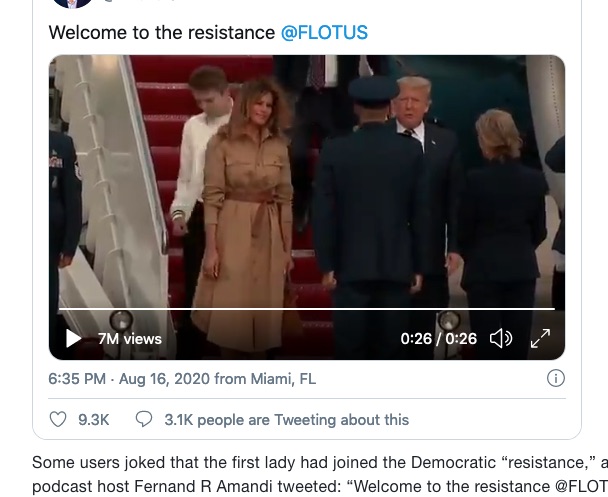 Twitter users were mixed on the reason why the first lady repeatedly moved her hand away from the US president.

Some users joked that the first lady had joined the Democratic “resistance,” and podcast host Fernand R Amandi tweeted: “Welcome to the resistance @FLOTUS,” while comedian Jena Friedman wrote: “The Resistance is Melania’s hand.”

Artist Derek DelGaudio went even further and joked that “She’s voting for Biden” in November’s presidential election, while managing editor of Occupy Democrats Brian Tyler Cohen wrote: “She really, really doesn’t like him.”

However, user @itsleewilliams felt that there was a more practical reason for the first lady appearing to refuse the president’s hand, and wrote: “looks like Melania is just trying to keep her skirt from blowing up.”

Other Twitter users agreed with Mr Williams, and @Vidulah1 tweeted: “You clearly can see in the video that she been trying to hold her dress down,” as @TiinaWilder wrote: “Kind of hard to hold the dress, the bag and the hand of another human at the same time.”

The incident on Sunday is not the first time the first lady has refused to hold the president’s hand in public, as Ms Trump has been filmed on multiple occasions rejecting his attempts.

The most recent incident was in January, when the first lady pulled her hand away from Mr Trump while they were attending a college American football match in New Orleans.

The couple, along with their 14-year-old son Barron Trump returned to Washington, DC on Sunday, following the death of the president’s 71-year-old younger brother Robert Trump on Saturday.

The president visited his brother in hospital in New York on Friday, and released a statement over the weekend, where he said: “He was not just my brother, he was my best friend. He will be greatly missed, but we will meet again.

“His memory will live on in my heart forever. Robert, I love you. Rest in peace.