SHOT FIRED IN LOUISVILLE! AMERICA ON THE VERGE OF RACE WAR.

Shots rang out in Louisville, Kentucky on Saturday as hundreds of members of heavily armed White militia groups, and armed African-American demonstrators, and “Not Fucking Around Coalition,” an all-Black militia, converged on the city for a protest against police brutality.

Many experts view armed conflict and a possible Race War almost inevitable as White militia groups continue to secure arms.
Unlike any other American president, Trump has not hidden his intentions, especially now that his reelection loss is almost certain. Later that summer, he called white supremacists who terrorized blacks and Jews in Charlottesville, Virginia, “very fine people.” And now, his seemingly only policy solution to coronavirus has been to label it the “Chinese virus” and hope the racism would scare it away.

Many expert are signaling warning signs that Race war may break out in the US if the president continues to encourage and circulate white power tweets.
The concept of “race war” is gaining popularity among white supremacists. In July 2019, police officers responding to a racist graffiti incident in Baltimore County, Maryland, encountered swastikas, as well as a phrase new to them: “Race War Now.” 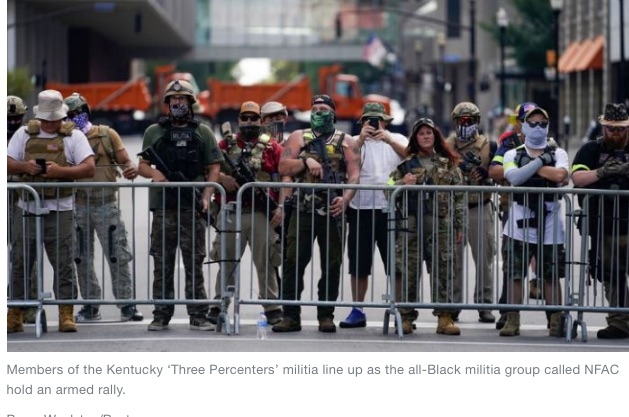 Some African-American protesters and community activists have also started to form a defense league to protect their community. The NFAC was formed this summer by Johnson, who refers to himself as the “Official Grant Master Jay.” He previously assembled about 1,000 militia members to march through Georgia’s Stone Mountain Park in protest of a confederate monument there. For Saturday’s rally, he asked members to arrive armed and dressed in black.

About 200 NFAC members—some from as far away as Oregon—answered the call, according to reporters on the ground, gathering in Baxter Park Saturday morning before a planned march to Jefferson Square Park. Dozens of Three Percenters also showed up in camouflage and carrying guns. Black Lives Matter protesters, unaffiliated with either group, also showed up to protest. 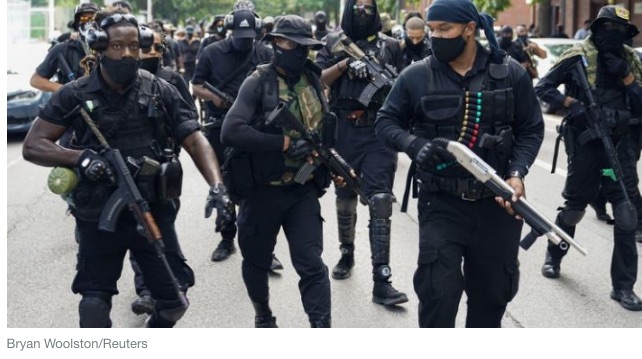 America may be facing its biggest challenge yet and elected officials are becoming helpless amidst the president tweets of white power videos. All Americans, regardless of race, ethnicity, gender, or religion have to stand up and speak against violence, and the time is NOW!

U.N. human rights office calls on U.S. police to limit use of force

Will This Billionaire-Funded Think Tank Get Its...