The Senate Republicans who have not conceded publicly that President-elect Joe Biden won the 2020 election argue that President Trump has the right to challenge the results in court, or point out that the vote totals haven’t been certified yet, or admit they need his voters to show up in Georgia’s special Senate elections, or privately acknowledge that they would pay a political price for not humoring Trump’s baseless fraud claims. Some say it’s best to let the courts swat down the fraud allegations so people who voted for Trump will feel assured the system worked.

But this reason for letting “process run its course” posted by Sen. John Cornyn (R-Texas) on Thursday is new. 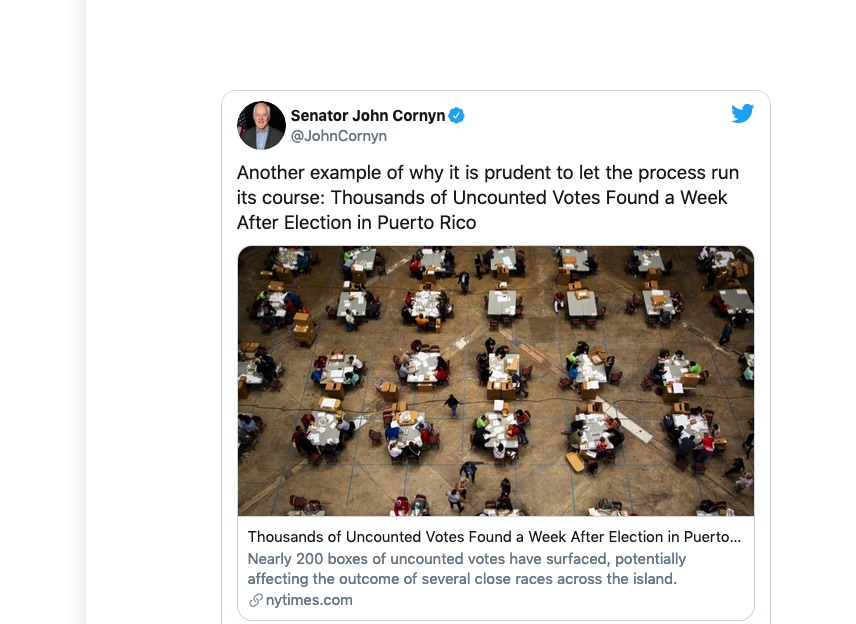 Puerto Rico, of course, doesn’t get to vote for president (or send members of Congress to Washington), so it wasn’t clear why Cornyn would bring up its uncounted votes. After getting needled for hours on Twitter, he said he wasn’t necessarily referring to the presidential race — though he did not explain what other “process” he had in mind. All other major races have been called and the losers conceded.

Cornyn, who won re-election last week, did send more subtle signals that he accepts the results of the election, retweeting two recaps of the Homeland Security Department’s cybersecurity agency affirming that “the Nov. 3 election was the most secure in American history” and “there is no evidence that any voting system deleted or lost votes, changed votes, or was in any way compromised.”