The art dealer, the £10m Benin Bronze and the Holocaust

Countless historic artifacts were looted from around the world during the colonial era and taken to Europe but there is now a growing campaign to return them. Among the most famous are the Benin Bronzes seized from modern-day Nigeria. Barnaby Phillips finds out about one family’s dilemma.

One morning in April 2016, a woman walked into Barclays Bank on London’s exclusive Park Lane, to retrieve a mysterious object that had been locked in the vaults for 63 years.

Twenty minutes later the woman appeared, carrying something covered in an old dishcloth. She unwrapped it, and everyone gasped.

A youthful face cast in bronze or brass stared out at them. He had a beaded collar around his neck and a gourd on his head.

The men, an art dealer called Lance Entwistle and two experts from the auctioneers Woolley and Wallis, recognized it as an early Benin Bronze head, perhaps depicting an oba, or king, from the 16th Century.

t was in near-immaculate condition, with the dark grey patina of old bronze, much like a contemporary piece from the Italian Renaissance. They suspected it was worth millions of pounds. The bank staff quickly led them into a panelled room, where they placed the head on a table.

The woman who went down into the vaults is a daughter of an art dealer called Ernest Ohly, who died in 2008.

I have chosen to call her Frieda and not reveal her married name to protect her privacy. 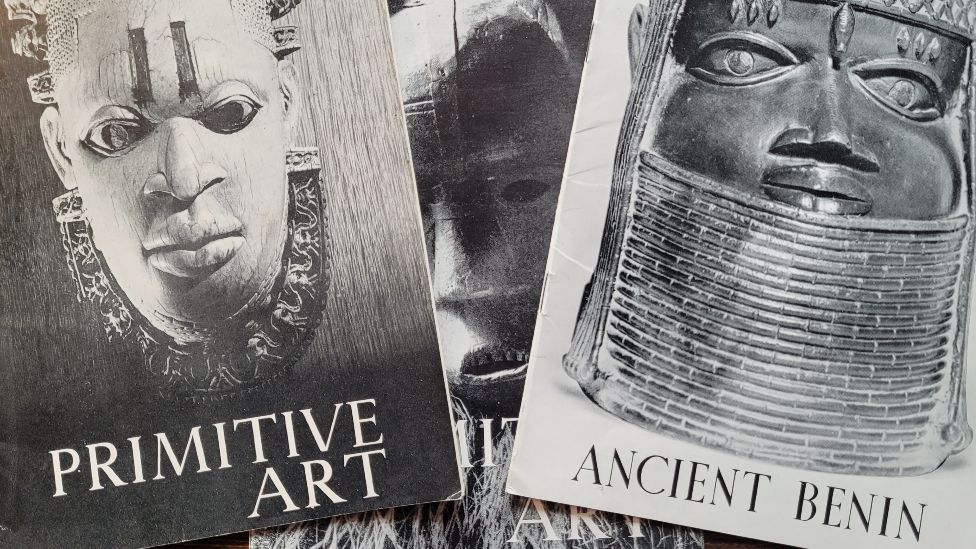 William Ohly lived “at the nexus of culture, society and artists”, says Entwistle.

He died in 1955. Ernest Ohly inherited his love of art, but was a more reserved character.

“A very, very difficult man to know. He didn’t let anything out. You did not know what he was thinking,” said Entwistle.

Ernest Ohly’s death provoked a ripple of excitement at the lucrative top end of the ethnographic art world. He was rumoured to have an extensive collection. His statues from Polynesia and masks from West Africa were auctioned in 2011 and 2013. And that, dealers assumed, was that.

But his children knew otherwise. In old age, he had told them he had one more sculpture. It was in a Barclays safe box and not to be sold, he specified, unless there was another Holocaust.

In 2016 matters were taken out of the children’s hands. Barclays on Park Lane was closing its safe boxes; it told customers to collect their belongings.

I met Lance Entwistle in 2019, in his library lined with books on African sculpture. His website said his company has been “leading tribal art dealers for over 40 years”.

“Tribal art” is a term that Western museums now avoid, but is still common in the world of auctions and private sales. 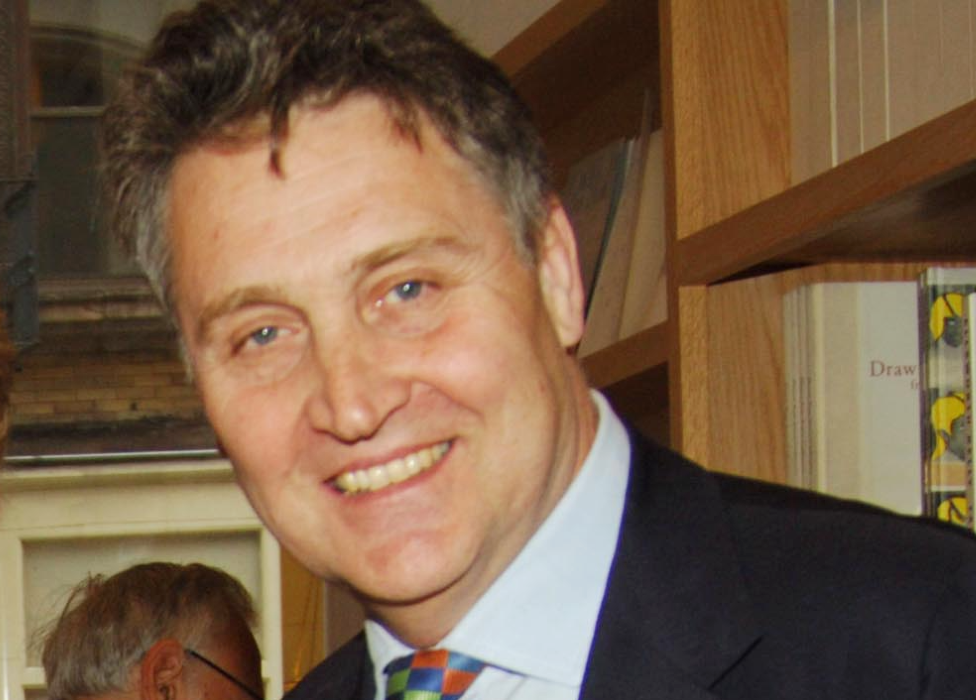 Getty Images
I was bowled over. It was beautiful, moving and its emergence from obscurity was so exciting”

Entwistle has rarely been to Africa, and never to Nigeria, but he’s well connected. The British Museum, the Musée du Quai Branly in Paris and the Metropolitan in New York have all bought pieces from him.

I asked him how he had felt when Frieda pulled the cloth away from the Benin Bronze head in the bank.

“I was bowled over,” he said. “It was beautiful, moving, and its emergence from obscurity was so exciting. I’m very used to being told about a Benin head, a Benin plaque, a Benin horse and rider. Generally I’m not excited because 99 times out of 100 they’re fake, and often the remaining 1% has been stolen.”

Provenance is everything in Entwistle’s world. This time, thanks to the Ernest Ohly connection, he was confident he was dealing with a bona fide piece.

He told Frieda the Benin Bronze head was significant and unusual, and convinced her to take it home in a taxi, to her terraced house in Tooting, south London.

The Benin Bronzes were brought to Europe in the spring of 1897, the loot of British soldiers and sailors who conquered the West African kingdom of Benin, in modern day Nigeria’s Edo state.

Although they are called Benin Bronzes, they are actually thousands of brass and bronze castings and ivory carvings. When some were displayed in the British Museum that autumn, they caused a sensation.

Africans, the British believed at the time, did not possess the skills to produce pieces of such sophistication or beauty. Nor were they supposed to have much history.

But the bronzes – some portrayed Portuguese visitors in medieval armor – were evidently hundreds of years old. 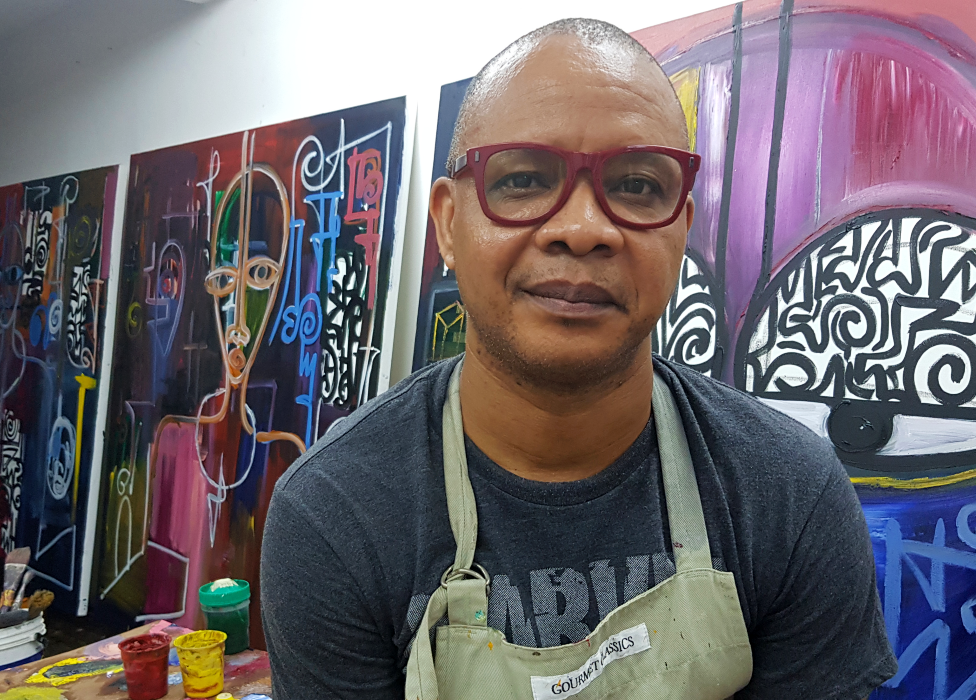 Barnaby Phillips
They were our documents, our archives, the ‘photographs’ of our kings. When they were taken our history was exhumed”

Benin had been denigrated in British newspapers as a place of savagery, a “City of Blood”. Now those newspapers described the Bronzes as “surprising”, “remarkable” and admitted they were “baffled”.

Some of these bronzes are still owned by descendants of those who pillaged Benin, while others have passed from owner to owner.

Victor Ehikhamenor, an artist from Edo state, told me the bronzes were not made only for aesthetic enjoyment.

“They were our documents, our archives, the ‘photographs’ of our kings. When they were taken our history was exhumed.”

But as their value in the West has increased, they’ve also become prestige investments, held by the wealthy and reclusive.

London auction sales tell the story. In 1953, Sotheby’s sold a Benin Bronze head for £5,500. The price raised eyebrows; the previous record for a Benin head was £780.

In 1968 Christie’s sold a Benin head for £21,000. (It had been discovered months earlier by a policeman who was pottering around his neighbour’s greenhouse and noticed something interesting amidst the plants).

Entwistle kept an eye on that 2007 sale. The buyer, whose identity was not publicly revealed, was one of his trusted clients.

Nine years later, presented by Frieda with the challenge of selling Ernest Ohly’s head, Lance knew where to turn.

“It was the first client I offered it to, which is what you want, there was no need to shop around,” he said.

There was only a minor haggle over price. The client, Entwistle insisted, was motivated by his love of African art.

“He will never sell, in my view.” Whoever he is, wherever he is, he paid another world record fee.

The “Ohly head”, as Entwistle calls it, was sold for £10m – a figure not previously disclosed.

If you envisaged the woman who sold the world’s most expensive Benin Bronze, you might not come up with Frieda.

We met in the Tate Modern gallery, overlooking the Thames. She had travelled from Tooting by underground. She is a grandmother, with grey close-cropped hair and glasses. She used to work in children’s nurseries, but is retired.

“My family is riddled with secrets,” she said. “My father refused to speak about his Jewish ancestry.”

She did her own research on relatives who were killed in Nazi concentration camps. Ernest Ohly was haunted, “paranoid”, says Frieda, by the prospect of another catastrophe engulfing the Jews.

Six million Jews were murdered during the Holocaust – and, according to the Jewish Claims Conference, the Nazis seized an estimated 650,000 artworks and religious items from Jews and other victims.

Ernest Ohly distrusted strangers and lived in a world of cash and secret objects. He kept a suitcase of £50 notes under the bed.

“Ernie the Dealer” was the family nickname. The children grew up surrounded by art. But by the end he was tired of life.

His house was chaotic, his Persian rugs infested with moths. The family found the suitcase of banknotes but discovered they were no longer legal tender.

Ernest Ohly may have let things slide, but he had been a formidable collector.

“He and my grandfather never went to Africa or the South Pacific, but got their knowledge from being around objects,” said Freida.

The British Empire was ending, and the deaths of its last administrators and soldiers brought rich pickings.

“I never understood why my father was so interested in reading obituary pages. The Telegraph, the Times, really studying them. If they were Foreign Office, armed forces, anything to do with Empire, he wrote to the widows.”

Ernest Ohly listed his buys in ledger books. That’s how Entwistle found what he was looking for: “Benin Bronze head… Dec 51, £230” from Glendining’s – a London auctioneers where he also bought coins and stamps. 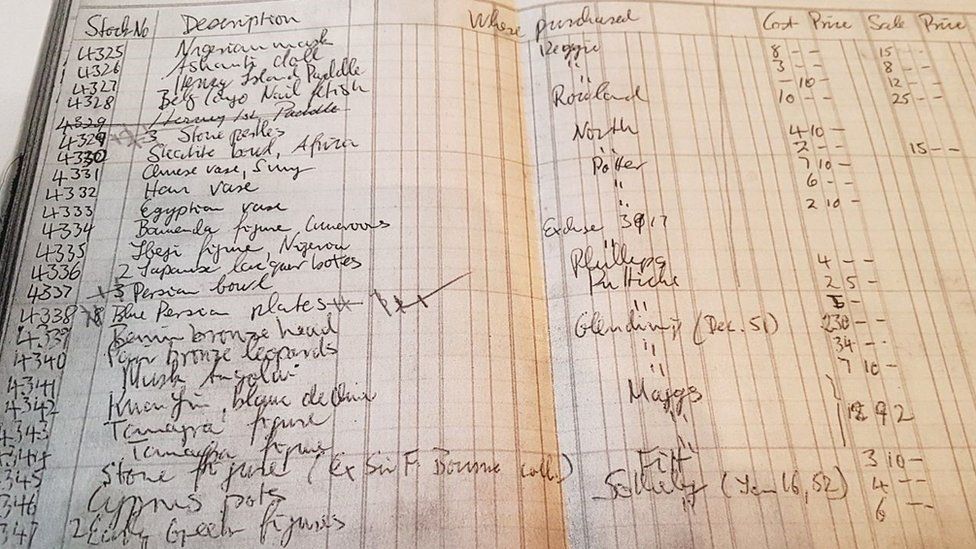 “It was like a lump of gold,” said Frieda. The windfall was not quite as large as it might have been.

Ernest Ohly’s affairs were a mess, and the taxman took a substantial amount. Still, Frieda says, she can sleep easy now. The Benin head bought care for her family, and property for her children.

Frieda is married to a man of Caribbean descent – and her son is a journalist.

A few years ago he wrote an article about how the Edo – the people of the Benin Kingdom – tried to stop the sale at Sotheby’s of a Benin ivory mask.

In fact, although he did not know this, it was a mask that his great-grandfather, William Ohly, displayed at his gallery in 1947.

The article described Edo outrage that the family who owned the mask – relatives of a British official who looted it in 1897 – should profit from what they regarded as theft and a war crime.

Frieda is too intelligent and sensitive not to appreciate the layers of irony behind her story. She had followed the arguments about whether the Benin Bronzes should be returned to Nigeria.

Britain has laws to enable the return of art looted by the Nazis, but there is no similar legislation to cover its own colonial period.

“Part of me will always feel guilty for not giving it to the Nigerians… It’s a murky past, tied up with colonialism and exploitation.”

Her voice trailed off.

“But that’s in the past, lots of governments aren’t stable and things have been destroyed. I’m afraid I took the decision to sell. I stand by it. I wanted my family to be secure.”

Frieda is not the only owner of Benin Bronzes who has wrestled with their conscience in recent years.

Mark Walker, a doctor from Wales, returned two Bronzes which had been taken by his grandfather, an officer on the 1897 expedition. 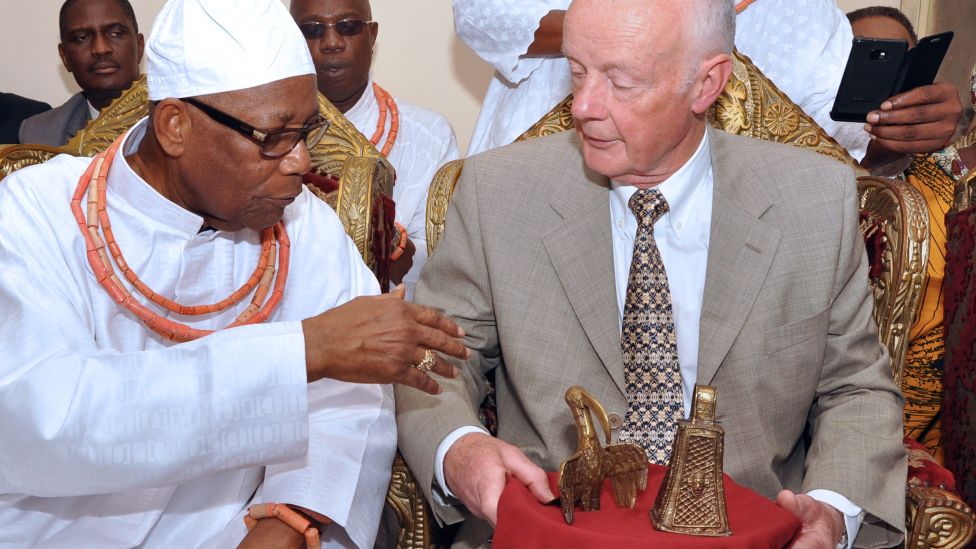 He received a hero’s welcome in Benin City.

Others are hesitant. In an imposing west London mansion block I met an elderly woman whose grandfather also looted Bronzes in 1897.

Ten, or even five years ago, it would not have been difficult to get somebody in her position to talk. But today the owners of Benin Bronzes are cautious, and I agreed to hide this woman’s identity.

She showed me two brass oro “prophecy birds”. I asked if they made her feel uncomfortable.

“I’ve felt misgivings, considerations that crossed my mind… Maybe misgivings is too strong a word. I don’t feel like giving them anything.” There was a long silence.

“You know,” she said, “one bumbles along for 77 years, and suddenly this has become a sensitive subject. It never was before.”

Frieda and I left the Tate and were walking along the Thames.

I was about to say goodbye. Unprompted, she returned to the Benin Bronzes.

Sometimes, she said, she wished her father had sold that head when he was still alive.

A dilemma would have been taken out of her hands.

“It was difficult for me,” she said again. “Part of me felt we should have given it back.” Then she was gone.