The first flash-bang grenade went off around 11:10 p.m. in Portland, Ore., a thunderous clap that echoed off the high walls of the Mark O. Hatfield Federal Courthouse. Within minutes, a rowdy protest against racism and police violence had turned into a chaotic scene of screaming civilians, shouting police officers, whizzing plastic stun munitions and cascades of gas grenades arcing through the night. As the civilians fell back under stinging clouds of gas, volunteer medics dumped entire bottles of water over their heads.

Trying to see who exactly was launching this battle, I poked my head around the corner of the courthouse and came face to face with the force that is rocking Portland and drawing the attention of the nation: a dozen federal police officers in green camouflage, their faces, names and unit insignia obscured, firing crowd-control weapons and beating their way through a group of young male protesters.

These men, identified by the Department of Homeland Security as members of a U.S. Marshals Special Operations Group and a Border Patrol Tactical Unit, have been trained in antiterrorism tactics and deployed in Portland with the sniper rifles and full battle rattle of an invading army. When not emerging on most nights to drive back protesters (including Portland Mayor Ted Wheeler, who was gassed Wednesday night), they have been filmed roving the downtown area in unmarked rental vans, leaping out to snatch individual protesters away for questioning. 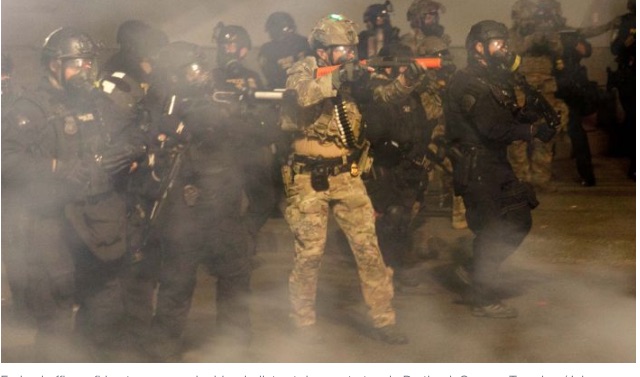 The shadowy DHS force is, at least visually, reminiscent of the secret police units that do the bidding of authoritarian regimes around the world, albeit of a far less brutal variety.

But there is little evidence the tactical escalation is working. The noisy show of force I witnessed Tuesday night left hundreds of people, including me, choking on tear gas. But federal officers have essentially been deployed for a photo op: less than 15 minutes after the skirmish began, it was over. The federal officers retreated inside the courthouse, surrendering the ground they had just taken back to jeering activists.

By some accounts, this was night 50 of the Black Lives Matter protests that have rocked Portland and focused national attention on the Trump administration’s efforts to suppress protests that sometimes carry a violent edge. The give-and-take of ground has become an almost nightly ritual.

Protests begin at sunset with music and the chanting of slogans, but usually end later in the night with clouds of tear gas and nonlethal munitions ricocheting off cars and walls. In its microcosmic way, the city of Portland has become the “battle space” that Secretary of Defense Mark Esper vowed to “mass and dominate” in a White House call with governors on June 1.

It was Trump himself who tweeted about domination, vowing to deploy the military and publicly putting Joint Chiefs of Staff Chairman Mark Milley in charge of suppressing riots. Trump also announced, just hours before I was teargassed at the Hatfield courthouse, that the same forces would be deployed to Chicago and other cities experiencing anarchic protests.

If Portland is any indication, the militarization is backfiring, turning a movement that even a week ago was drawing only a few hundred protesters into one that now draws thousands every night.

It is clear what motivates most participants.

“Black Lives Matter is the most important thing,” said a white protester in his 30s named Bruce, as he chalked a sidewalk with drawings of his cat holding a BLM sign. But the shadowy federal arrests had him worried.

“What’s going on behind those walls doesn’t feel right,” he said, pointing at the courthouse, where DHS officers were assembled. “Protesters like us are peacefully walking around and just getting plucked out of the crowd.” 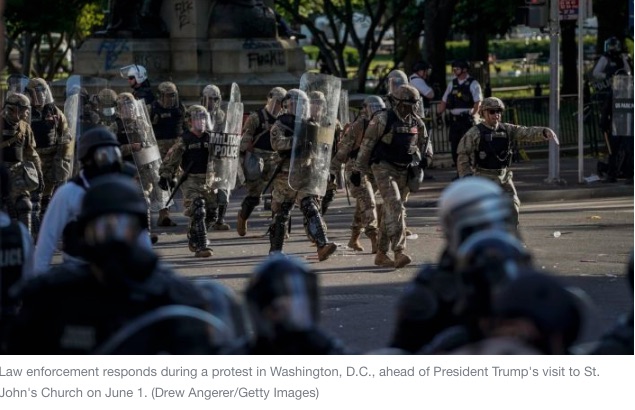 Walking through the Portland protests in recent nights, I was reminded less of a violent revolution than of Occupy Wall Street, which filled New York’s Zuccotti Park with debate, criticism of the government and demands for economic justice. Amid nightly street battles, which include destructive actions by protesters, there has also been a flowering of that civic engagement, with volunteer medics, tents set up to provide free food and clothing, and even art therapy for stressed-out antifa. The demonstrators generally wear masks against the coronavirus or against tear gas, but rarely both. Social distancing ends with the first blast of a gas gun.

I’ve been a foreign correspondent for two decades and am used to paramilitary police and citizens battling it out — but that was in the streets of troubled countries like Brazil or Venezuela, not in my hometown. I have been documenting how repressive regimes around the world work — for my newsletter, the Authoritarianism Project — but I never expected to bring that story home.

Secret policemen stuffing prisoners into unmarked cars was a hallmark of the murderous Argentine junta in the 1970s, although they used Ford Falcons rather than Chrysler minivans. And Brazil’s aggressive riot police spent the 1980s suppressing demonstrations only to end up as hated symbols of an antidemocratic era.

There are no allegations of torture or lethal kidnapping against U.S. police, and the DHS claims the legal authority to detain people with “reasonable suspicion.” But it doesn’t always look that way when teams of unidentified men, working in silence, shove prisoners into cars and drive away.

That’s “kidnapping of our citizens,” said the Rev. Tara Wilkins of the Portland Interfaith Clergy Resistance. But acting Homeland Security Secretary Chad Wolf has said that “potential“ threats are the only justification he needs to deploy federal troops here or elsewhere.

Wolf dismissed pleas from Mayor Wheeler and Gov. Kate Brown to send the troops home. Portland’s own police officers, who have developed a high tolerance for the city’s circus-like dramas, are supporting the federals but must wonder what it will be like when they leave and we all have to go back to living together.

Two years ago, right-wing groups including the Proud Boys engaged in roving street brawls in Portland with opponents from groups like Rose City Antifa and so-called black bloc protesters with a violent streak. Even then, the clowns and musicians outnumbered violent anarchists on the left, but both of the rallies I attended quickly degenerated into fistfights and beatings, with a few protesters on both sides going as far as using brass knuckles, clubs and electric shock devices. 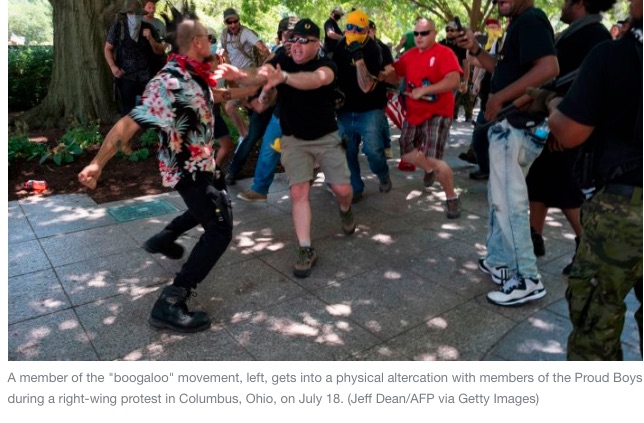 A member of the “boogaloo” movement, left, gets into a physical altercation with members of the Proud Boys during a right-wing protest in Columbus, Ohio, on July 18. (Jeff Dean/AFP via Getty Images)

Portland police largely stayed out of sight then, but those rallies were mere appetizers compared with the large-scale battles in recent nights that have pitted the city’s riot squad and a little over 100 DHS troops against thousands of mostly nonviolent protesters.

The sudden street-clearance operation I witnessed Tuesday night — in which I was teargassed worse than in any previous experience in Bolivia or Beirut — appears to have been triggered when activists set a trash fire against the stone walls of the federal courthouse. The small fire was no threat to Portland, and when DHS produced a timeline of “rampant long-lasting violence” to justify its deployment, the list was mostly acts of graffiti.

Wolf, who came to oversee the deployment, posted photos of “what I saw in Portland” that showed graffiti and boarded-up windows. He told Fox News the city was “under siege.”

In reality, the protests occupy an area of just two to four square blocks, with little effect on the rest of Portland, already a ghost town due to Oregon’s strict lockdown procedures against COVID-19. Black Lives Matter and antiracism protests were already routine in the city, and traffic flowed normally just a block from the teargassing I witnessed. Even as protests surged toward the front of the federal courthouse, I found the street behind it completely empty.

It’s worth comparing the treatment of protesters in Portland with those in other cities. In Lansing, Mich., anti-lockdown protesters carried rifles into the state Capitol and menaced legislators in session, without any police response at all. Militia groups, freelance gunmen and Bikers for Trump have threatened BLM protesters everywhere from Bethel, Ohio, to Spokane, Wash. Police departments rarely do anything unless shots are fired, a deference not extended to the Mom Wall, where I saw federal agents beat unarmed women in bicycle helmets just for refusing to move. 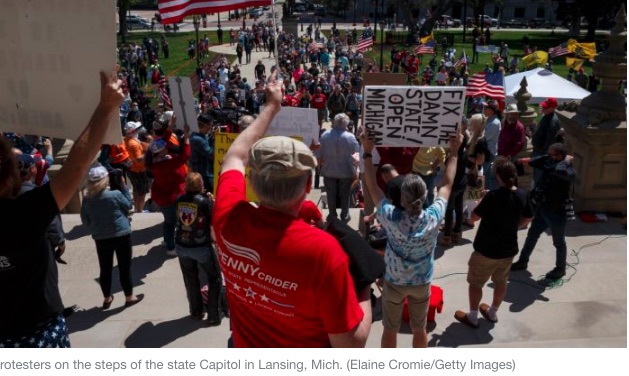 I actually saw that on a video clip, even though I was standing within 100 yards from where it happened. As America is learning for the first time since 1968, it is difficult to see clearly amid clouds of tear gas. Portland’s nightly revolution is televised, live-streamed, simulcast and uploaded, a fire hose of media from phones, GoPros and drones flying overhead. One of the scarcest commodities is a battery charger.

Some protesters have up to three cameras running simultaneously, even as they wander past the Riot Ribs tent, where volunteers grill free pork and beef, amid clouds of smoke far tastier than what will appear later in the evening. Never have so many posted so much, showing so little.

But the live-streaming of this moment in our history is having an effect, drawing global attention to a conflict conducted over just a few blocks of physical space. The last time I had been at a protest here, it featured countless American flags and a cowboy on a beautiful bay horse, all to support Ammon Bundy, the right-wing rancher on trial here in 2017 for his role in the Malheur National Wildlife Refuge occupation.

But even Bundy has now condemned the use of federal law enforcement in local protests, and the Three Percent Militia, arguably the most powerful in America, criticized Donald Trump for suggesting that looters be shot. Trump’s overreach is causing schisms inside these ultra-right movements; at an Idaho militia rally I attended in June, hundreds of armed men and women applauded as a speaker from Black Lives Matter condemned the police murder of George Floyd. If Trump can’t hold the Coeur d’Alene fairgrounds, he won’t take downtown Portland.

The conflict in Oregon — one step in a presidential law-and-order reelection tour — is coming down to a nightly clash between a few hundred police officers, some persistent BLM activists and a thousand moms holding flowers.

Trump can deploy the same forces to Chicago and elsewhere. But if the Portland model spreads, it’s unlikely he can win this fight.

Patrick Symmes is the author of the forthcoming book “Death Squad Democracy: How Foreign Tyrants Brought Violence to American Politics.”

For a Black Man Hired to Undo...