Home Latest News The data is in: Fox News may have kept millions from taking the coronavirus threat seriously
Latest NewsUncategorizedUS NewsWorld News

The data is in: Fox News may have kept millions from taking the coronavirus threat seriously

It’s another one of those Trump Era realities best described as unsurprising but nevertheless shocking.

Three serious research efforts have put numerical weight — yes, data-driven evidence — behind what many suspected all along: Americans who relied on Fox News, or similar right-wing sources, were duped as the coronavirus began its deadly spread.

The studies “paint a picture of a media ecosystem that amplifies misinformation, entertains conspiracy theories and discourages audiences from taking concrete steps to protect themselves and others,” wrote my colleague Christopher Ingraham in an analysis last week.

Those who relied on mainstream sources — the network evening newscasts or national newspapers that President Trump constantly blasts as “fake news” — got an accurate assessment of the pandemic’s risks. Those were the news consumers who were more likely to respond accordingly, protecting themselves and others against the disease that has now killed more than 123,000 in the United States with no end in sight.

Those who relied on Fox or, say, radio personality Rush Limbaugh, came to believe that vitamin C was a possible remedy, that the Chinese government created the virus in a lab, and that government health agencies were exaggerating the dangers in the hopes of damaging Trump politically, a survey showed.

“That’s the real evil of this type of programming,” Arthur West of the Washington League for Increased Transparency and Ethics, which sued Fox News in April over its coronavirus coverage, told the Times of San Diego. “We believe it delayed and interfered with a prompt and adequate response to this coronavirus pandemic.” (A Fox News lawyer called the suit “wrong on the facts, frivolous on the law,” and said it would be defended vigorously; a judge dismissed the suit in May.)

Beyond the risks the general public faces from consuming this nonsense and misinformation, there’s the fact that the president himself has been picking up these same ideas and using them to steer policy. Instead of tapping experts in the medical and scientific community — many of whom are on the government payroll — he has chosen to educate himself by watching right-wing news outlets.

Recall the South Carolina campaign rally in late February where Trump dissed his political adversaries’ criticism of his virus response as “their new hoax.” Or the Feb. 26 White House news conference where he said of the virus: “We’re going to be pretty soon at only five people. And we could be at just one or two people over the next short period of time.” The next day, he offered his now-infamous “it’s going to disappear” reassurance.

As the weeks went on, and the toll of the virus became undeniable, Fox’s offerings became somewhat more responsible, but viewers were misled for far too long. As late as March 6, a Fox “medical contributor” was falsely assuring Sean Hannity’s audience that the virus wasn’t all that bad: “At worst, worst-case scenario, it could be the flu.”

From March: Rupert Murdoch could save lives by forcing Fox News to tell the truth about coronavirus — right now

To his credit, Fox’s Tucker Carlson was delivering a different, much more reality-based, message, but he was an outlier on the network in those early weeks of the crisis. In fact, one of the studies found that Carlson viewers took protective measures much earlier than Hannity viewers.

The upshot was clear: For too long, many devotees of most right-wing news decided they didn’t need to stay home. Others absorbed the idea that wearing a protective mask was an act of left-leaning partisanship.

But disease leaps across the political aisle quite nimbly.

And so, it’s tragic — but again not all that surprising — to see the virus spiking now in red states where governors and other public officials joined Trump and his favorite news outlets early on in downplaying the dangers.

When confronted with the information in one study that cast Sean Hannity in a dim light, Fox News responded with defensive gaslighting — even using the specific phrase “reckless disregard for the truth,” which is most typically deployed by those threatening a libel suit. 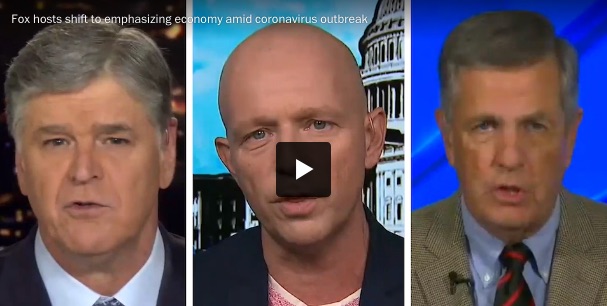 Fox’s response also included releasing a timeline of Hannity segments in the early months of this year — with titles such as, “We have the best people working on coronavirus” — to prove the show covered the topic relentlessly. The network noted that Hannity interviewed the nation’s top infectious-disease expert, Anthony S. Fauci, as early as January.

Hannity’s interviews, though, tend to be exercises in Trump sycophancy rather than fact-finding missions. His first probing question to Fauci in a March interview: “The quarantine that the president did within three weeks, [which was] the fastest ever — do you believe it likely prevented thousands of Americans from contracting the virus and was a smart thing to do?”

One of the study’s authors persuasively rejected Fox’s criticism that underlying data was chosen unfairly: There’s no “cherry-picking” possible, he said, because the independent coders read every transcript between late January and late March. These academic studies, published in Harvard Kennedy School Misinformation Review and the National Bureau of Economic Research, are cautious. They don’t make wild claims, and they wisely hedge their conclusions because they don’t want to go too far.

Still, it’s difficult to come away from them without believing that serious harm has been done. And that it’s far from over.

By Margaret Sullivan
Margaret Sullivan is The Washington Post’s media columnist. Previously, she was the New York Times public editor, and the chief editor of the Buffalo News, her hometown paper.

Trump Retweets Video Of ‘White Power’. Our Emperor has No Clothes

Senate trial to kick off with a...