Home PoliticsBreaking News THE POSSIBLE CONSEQUENCES OF TRUMP’S RE-ELECTION AS PRESIDENT. How The World at large will React on November 3, 2020
Breaking NewsLatest NewsOP-EDPoliticsUS NewsWorld News

THE POSSIBLE CONSEQUENCES OF TRUMP’S RE-ELECTION AS PRESIDENT. How The World at large will React on November 3, 2020

The recent tirade against the opposition by Donald Trump heralds his aggressive take on his Political rivals after senate acquitted President Donald from the impeachment Trial as the judge stated that no evidence could prove him guilty. The judgment relieved Donald Trump from the Pressure of being impeached for charges. Donald Trump’s recent acquittal has been viewed by many analysts as Surprise Win in this year’s Presidential Elections 2020.

Republicans are sure that he will likely win the elections and hold the presidency for yet another term since they foresee a less tough competition after the treacherous Impeachment trial came in his favor.
President Donald Trump’s impeachment trial victory might be a great setback for Democrats as they expected a lot from the Trial but the end result was frustrating and devastating for democrats.
Furthermore, After acquittal from the Impeachment trial, President Donald Trump lashed out at the political rivals that they conspired against him and dragged him in the so-called impeachment trial and showed the first-page Headline of Daily Washington Post to the supporters which read “Trump Acquitted” as lead Headline. As soon as he showed the Newspaper Headline, the audience started clapping, roaring and applauding his acquittal. President Donald concluded his remark as “This is the Result”.

Furthermore, Trump’s winning of Democratic primary in IOWA State from Republican platform was also a positive sign of his winning the Election 2020.
On the other hand, the socialist Bernie Sanders has been a strong contender in Presidential Elections, he is behind few points against democratic Pete Buttigieg. However, Joe Biden still remains the front runner.
There is tough competition between these three candidates to win Nominee for Presidential Elections as the IOWA caucus results pour in. Though app issues resulted in delayed results amid fears that the app might be hacked to influence and affect the Presidential Elections.

On the other hand, the US State Department has been meeting in New York with United Nations Security Council to apprise them regarding US President Donald Trump’s controversial “Deal of the century” or Middle East Peace Plan.
The Peace plan has already received severe criticism since it is quite impractical that Israel the occupational force be given Jerusalem as Capital which is categorically rejected by Palestinian President Mehmood Abbas and Recently held OIC summit in Saudi Arabia.

Turkish President Recep Tayyip Erdogan on Thursday hosts over 30 heads of state and government from Islamic countries in Istanbul for a major summit aimed at overcoming differences in the Muslim world. Turkey seeks to showcase its influence in the Muslim world, particularly in lands once controlled by the Ottoman Empire, at the two-day summit of the Organisation of Islamic Cooperation (OIC). (Photo by OZAN KOSE / AFP)

The OIC members categorically rejected US President Donald Trump’s Middle East Peace Plan. Most of the opinion leaders have blasted the So-Called Deal of The Century as Deal of Treachery against the Palestinians.
Most experts are of the view that the deal of the century is similar to Bantu homelands that had been created for black South Africans to bolster Apartheid. Although the black homelands were created these were never accepted by South Africans.

The analysts are of the view the Trump- Netanyahu nexus may have led to ” Trump’s Deal of Century” confirming that Trump has embraced Zionism or he is under pressure from Israeli Lobby to have a larger territory for Greater Israel.

According to the UNGA Resolution # 181 of 1947 that called for the partition of Palestine into Arab and Jewish states, with the city of Jerusalem as a “corpus separatum” (“separate entity”) to be governed by a special international regime; the UNSC resolution # 242 of 1967 which called for the withdrawal of Israeli troops from the occupied territories, acknowledged the claim of sovereignty, territorial integrity and political independence of every state in the region and called on the UN secretary-general to appoint an envoy to facilitate an acceptable solution to the conflict; and, UN SC Resolution 2334 of 2016 which reaffirmed the two-state solution.

The Middle East plan is very dangerous and may further aggravate the Situation since the Middle East presents a grim look already. There is complete chaos in Syria, Yemen, Iraq, and Palestine. The people are engaged in civil war and terrorism is on the rise. The law and order are abysmal.
The assassination of Iranian General Qassem Suleimani by the US was a great blunder committed by Trump Administration that escalated the diplomatic relations with Iran. The states Afghanistan, Syria, Libya, Iraq and Palestine are in a serious humanitarian crisis as these states have been going through the serious repercussions over US Presence in these states and Iran’s economy have been paralyzed owing tough US Economic Sanctions after Obama and Khatemi Nuclear deal was scrapped by US President Donald Trump and imposed severe economic sanctions that have crippled Iranian Economy.

Political pundits are predicting a surprise win for Donald Trump in US Elections 2020 unlike his recent acquittal in Impeachment Trial which will be used by President Trump as a clean chit for presidential Elections though the results may be upsetting, unpredictable in coming days.
On the other hand, democratic candidate Bernie Sanders may have a strong contest for presidential Election Race as he has reportedly won the IOWA Caucus recently, though results are not complete yet.

With the strong hostility from Democrats in the US, the Palestinians, OIC, UN and Muslim countries opposing the Donald Trump’s so-called “Deal of Century” as well as middle East peace Plan, it is assessed that Donald Trump has messed up US Foreign Policy and he is bearing the brunt of his insensible decisions as he still considers government as a drama or film since he has been actor in entertainment Industry and the Real Estate Business Tycoon, considers the state affairs as limited-time entertainment serial.

He has lost his credibility owing to blatant Lies as mentioned by Bernie Sanders in Debates and campaign. Donald Trump has behaved more like an actor than politicians since he has remained associated with acting and real estate business. He does not have a real sense of political and social matters being an actor turned politician.
Ill-advised by the handpicked non-professional experts for his authoritarian type of Governance where the terms “Hire and Fire” have become the order of the day as several advisors in the Trump administration has either resigned on the complaint that they could not live with an ill-tempered person while others sent home packing as they were not in good books of US President.

Such a scenario warrants that American people cannot afford to have such a president who has damaged national interests that have stirred severe antagonism in the world especially in the Middle East and Africa. At the same time, Americans do not want war with Iran or others in the Middle East. People are well aware that Trump cannot make America great only the sensible person could materialize such a dream.
The growing concerns of the Middle East and the world about US president are adverse since he is an opportunist. He tasked Pakistan to bring the Afghan Taliban on negotiating table so that the Peace Deal could be inked. Pakistan played its part in doing so for bringing Peace in Afghanistan.

The growing Trade war with China and blockage of entry for Chinese nationals or people visiting china over the CronaVirus Outbreak in Wuhan substantiates that Donald Trump has created more enemies than friends due to his stubborn and no serious attitude that has played havoc with foreign policy of United States that will take a long time to be put on the right track.

At present, the Middle East is burning and demanding the US to leave the Middle East where they are no more wanted. The abysmal situation diminishes the slogan being chanted by people in the United States “Make America Great Again “ How a person who messed up and eroded the whole internal and external affairs of the country having no sense to run the country will be tolerated again for yet another four years. The choice is ours, as Americans whether we want him as our next president for another four years or not. 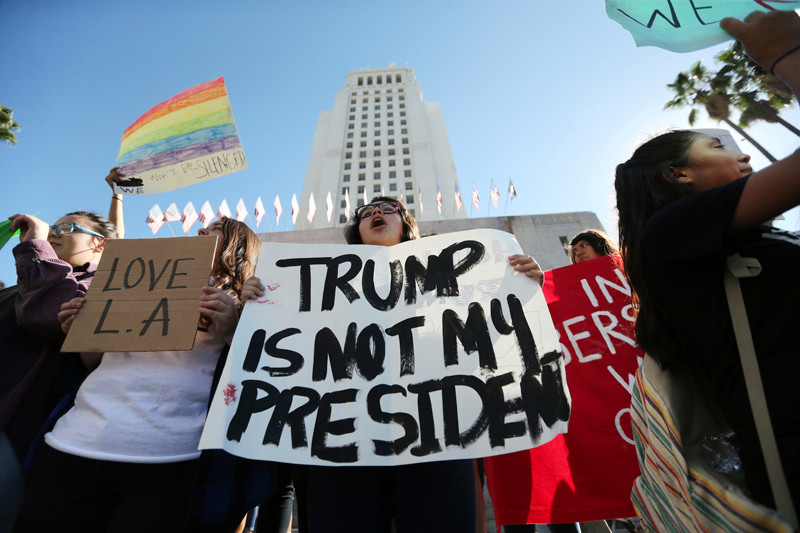 Students from several high schools rally after walking out of classes to protest the election of Donald Trump at City Hall in downtown Los Angeles Monday, Nov. 14, 2016. (AP Photo/Reed Saxon)

Many analysts and experts are pointing out that there would be upset like US Elections 2016 when Democrats Hillary Clinton was considered the favorite to win the Election because she was winning initially but the outcome was shocking that prompted people to take to roads and start protesting.
Electronic media and Print media termed the elections as the worst elections in American history since Trump’s victory was unbelievable and indigestible for many countries. Though some countries like India celebrated his victory as he had an anti-Muslim agenda and had announced several travel restrictions for Muslims and African countries.
Finally, if Trumps gets re-elected for the second term, many analysts believe that his second term would be worse than that of today.
Trump administration has pushed the United States to isolation and if the concrete steps were not taken, it will start losing its influence and relevance in the world. if Trump by surprise wins reelection for the Second term it will be disastrous for all. Only Americans will decide who they want to see as the next president: Donald Trump with perilous internal and external policy, Socialist Bernie Sanders, or Joe Biden a middle the road centrist Democrat with proven record of accomplished and a unifying message.