Home PoliticsAfrica News The US didn’t send the first Black person into space — the Soviet Union did with the launch of Arnaldo Tamayo Méndez, an Afro-Cuban man who cleared the way for others to follow
Africa NewsAsia NewsBreaking NewsBreaking News VideosLatest NewsPoliticsUS NewsWorld News

The US didn’t send the first Black person into space — the Soviet Union did with the launch of Arnaldo Tamayo Méndez, an Afro-Cuban man who cleared the way for others to follow

NASA did not launch the first Black person into space — the Soviet Union beat the US space agency by three years.

Arnaldo Tamayo Méndez, a Cuban of African descent, launched to space with a Soviet cosmonaut crewmate on September 18, 1980.

NASA missed an opportunity to make Captain Ed Dwight the first Black astronaut 20 years earlier — and put him in the running for an Apollo moon-landing mission.

Ultimately, Guion Bluford, who flew on the eighth space shuttle mission in 1983, was the first Black NASA astronaut to reach orbit.

On the evening of September 18, 1980, a towering rocket pushed a cramped spacecraft with two people inside toward space.

The spaceship reached low-Earth orbit a few minutes later, and the crew spent two days flying toward a small space station, where they stayed for almost a week before returning to Earth.

The mission made human history: It was the first-ever launch of a Black or Latin person into space. But the US had nothing to do with the feat.

Instead of America — which had managed to land 12 people on the moon about a decade prior — the mission was launched aboard a Soyuz spacecraft by the now-former Soviet Union. And it was Brigadier Gen. Arnaldo Tamayo Méndez, a Cuban citizen of African descent, who made the historic flight with Soviet cosmonaut Yuri Romanenko.

NASA, meanwhile, wouldn’t launch a Black astronaut until 1983, when its space shuttle launch system was in its third year of operation.

History needn’t have played out this way: The US space agency had an early opportunity to break down a conspicuous racial barrier in space amid the American civil rights movement, and many years ahead of its Cold War rival. Such a move might have even teed up a diverse moon landing during the Apollo program, but 1960s agency leaders failed to do either — and willingly so, according to some.
An Afro-Cuban orphan reaches the stars 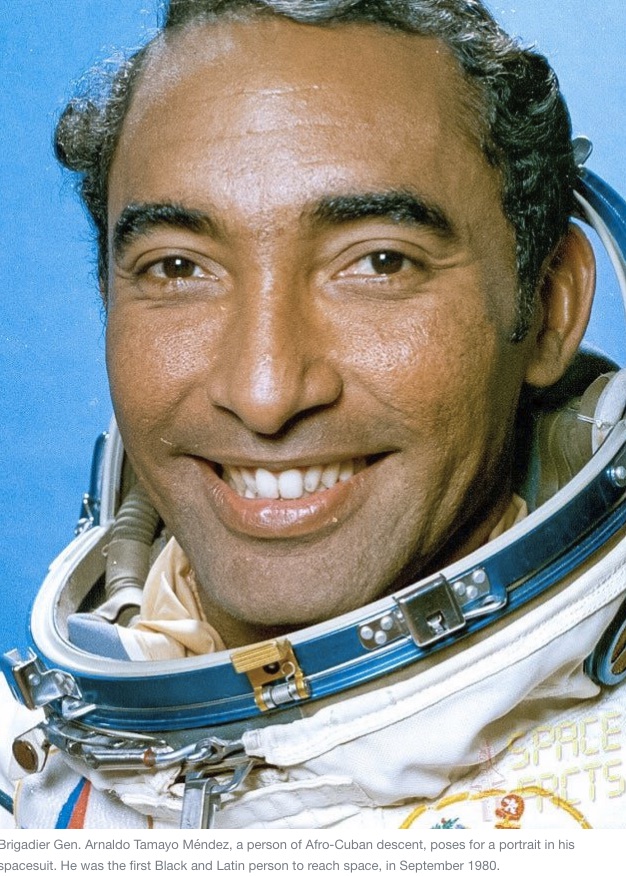 His upbringing was anything but easy. Born into a poor family on Guantánamo at the eastern tip of Cuba, his parents died from a “serious illness” when he was just a few months old, orphaning him, according to the book “Interkosmos: The Eastern Bloc’s Early Space Program” by Colin Burgess and Bert Vis.

“I was born in a poor negro family, and although I dreamed of flying from childhood, that was utterly unthinkable,” Tamayo Méndez said in the book. “I had to start work early, as a street shoe-shine boy — a poor man’s profession — or selling vegetables.”

He also delivered milk, labored in a furniture factory, and became an apprentice carpenter at 13 years old.

Tamayo Méndez joined the Cuban Revolution of the 1950s, and he later attended the Association of Young Rebels around 1960, according to BlackPast.org.

That led him to study as an aviation technician in Cuba and become a pilot after moving to the Soviet Union to continue his studies, where he learned to fly a MiG-15 fighter jet. While training, he was inspired by the first-ever human spaceflight by Yuri Gagarin in 1961.

According to the book, Tamayo Méndez later flew reconnaissance missions during the Cuban Missile Crisis and continued to fly as he ascended the military ranks over the years. This positioned him as a cosmonaut candidate when the Soviet Union launched the Intercosmos program to help its allies reach space.

Tamayo Méndez was selected for the program in 1978 and spent roughly 1,500 hours training over more than two years with Romanenko, his crewmate, before their September 1980 launch. The two men docked with the modest Salyut-6 space station a couple days later, stayed aboard for about five days, and then returned home.

While in space, Tamayo Méndez helped perform more than two dozen experiments. For four hours each day on Salyut-6, he put on special shoes designed to put pressure on foot arches in hopes of lessening the nauseating and disorienting effects of space adaptation syndrome, or “space sickness,” which affects about half of people who fly to space. (Astronauts and cosmonauts today use anti-motion sickness drugs and time to treat the condition.)

Tamayo Méndez also helped with experiments involving a brain-stimulating helmet, as well as those designed to measure stress levels, blood circulation, immune system cell health, and cellular of division yeast.
‘It is a symbol that a man from such humble origin has attained such extraordinary success’ 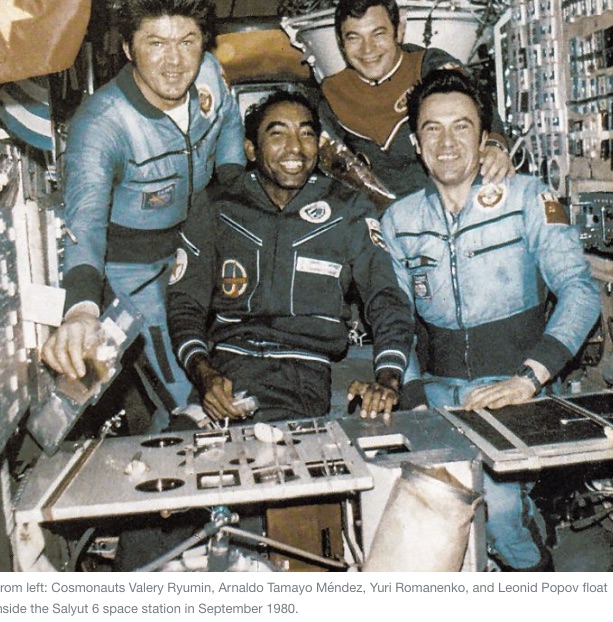 During the selection process for the mission, called Soyuz-38, Tamayo Méndez beat out a Romanian candidate for the prime crew.

Burgess and Vis wrote in their book that it’s “believed that Fidel Castro [Cuba’s president] wanted Mendez to fly the Soviet-Cuban mission and used his considerable influence to ensure that this was the outcome.”

After his safe return to Earth, Tamayo Méndez received hero’s medals from both Cuba and the USSR. Castro gave a speech in October 1980 that highlighted the cosmonaut’s status as a Black and Latin man.

“It is a symbol that a man from such humble origin has attained such extraordinary success,” Castro said. In a nationalistic and ostensible jab at the US and other western nations, he added: “Of course, only the revolution — and the revolution alone — has made it possible for a youth such as Tamayo to have that possibility.”

Since NASA formed in 1958, the agency has selected 350 astronauts who are eligible to fly to space. Eighteen of them are Black astronauts, of whom 14 have reached orbit. US Navy Commander Victor J. Glover, selected by NASA in 2013, is slated to become the 15th when he flies to space aboard SpaceX’s new Crew Dragon spaceship around August 2020. 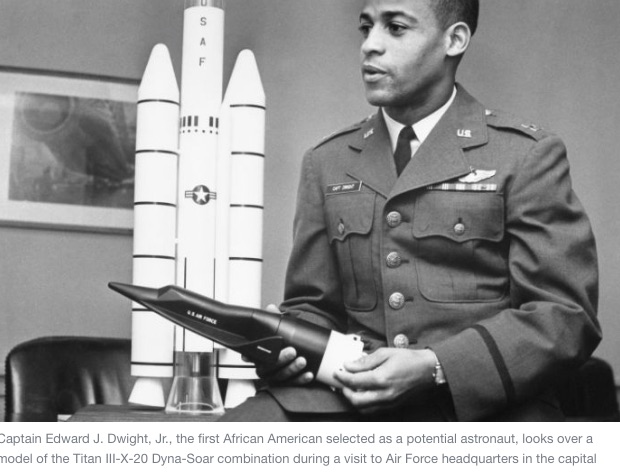 Early in the term of President John F. Kennedy, as the White House pushed to land people on the moon before 1970, the administration asked the Pentagon to find a Black person in its ranks who could become a NASA astronaut.

On December 8, 1961, the Pentagon sent a memo to President John F. Kennedy’s Civil Rights Subcabinet Group. The third section, titled “Negro Astronaut,” highlighted the difficulty of locating such a person.

“An effort is being made to locate a qualified Negro test pilot to join the astronauts. Personnel data is being obtained and reviewed, but no determination as to the availability of a qualified individual as yet has been made,” the DoD said in the document.

The filters for candidates into the Aerospace Research Pilot School (ARPS) — established in 1961 to churn out future generations of astronauts for NASA — were intense, as spaceflight historian John Logsdon wrote in a 2013 article for Quest: The History of Spaceflight Quarterly. The necessities included “being under 35 years of age, having at least 1,500 hours of experience flying jet airplanes, possessing at least a bachelor’s degree in science or engineering, and having three consecutive ‘outstanding’ ratings from his military superiors.”

Not assisting the DoD in finding a “qualified” candidate was hundreds of years of oppression of Black people, and specifically a lack of access to high-quality education and career opportunities that would’ve otherwise produced a bounty of candidates. Also not helpful: Some military leaders’ ongoing defiance of a 13-year-old executive order to integrate the armed services, and the institutional racism thickly permeating all corners of government and society at large.

Thus the search yielded just one person: Captain Ed Dwight, Jr., then a 27-year-old jet pilot. He was invited to, and joined ARPS in 1962, withstanding “prejudice and scorn” while he trained on the grounds of Edwards Air Force Base, according to the Smithsonian Magazine.

“I did not dream that I was going to become the first Black astronaut,” Dwight said in the documentary film “Black in Space: Breaking the Color Barrier,” which the Smithsonian Channel debuted in February. “That never entered my mind because that was a big obstacle standing in my way, and I knew there was going to be a racial component to that obstacle. But I didn’t know it was going to be as sophisticated and as determined as it was.” 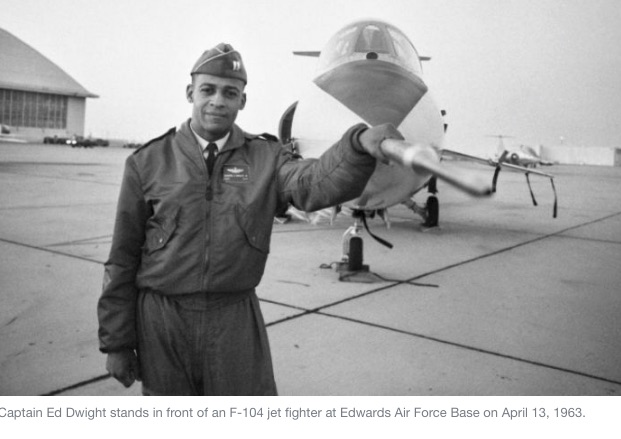 Chuck Yeager, who was the first to break the sound barrier, commanded ARPS and was “shocked” that he had to integrate the school, Dwight said in the documentary. Nevertheless, Dwight graduated as a test pilot in October 1963, making him eligible for NASA astronaut selection — but the agency did not pick him from the school’s first graduating class.

“[Yeager] called all the instructors and he announced to these people, ‘If he graduates, Kennedy wants to turn this space program into a Black space program,'” Dwight said in the documentary. (Yeager has over the years denied that he was biased against Dwight or other Black ARPS enrollees.)

After Dwight’s non-selection, the White House apparently put more pressure on NASA to pick Dwight, to the point he was to be selected for the next astronaut class. But just weeks before that event, President Kennedy was assassinated, and Dwight was again passed over after Lyndon B. Johnson assumed the presidency.

“I went right down the tube because Johnson wanted his own Black guy, and they chose [Robert] Lawrence. They promised me a mission if I didn’t talk to the press,” Dwight told writer Frank White III for a story in the February 1984 issue of Ebony magazine. (Lawrence was selected as the first African-American astronaut in June 1967 but died that December in a jet-training flight.)

After receiving anonymous and threatening letters related to his continued training, Dwight was reassigned. He later quit the Air Force to become a sculptor, as he chronicled in his 2009 autobiography titled “Soaring on the Wings of a Dream.”

Thomas McElmurry, a deputy at ARPS, according to Logsdon, later said Dwight was “perfectly capable of being a good astronaut,” but added “it wasn’t important enough to somebody in this country at this stage of the game to do it, so they just chose not to do it.”

Can Haiti Rise From the Ashes?