Home PoliticsAfrica News ‘This is the only way to get real change’: How Black Americans are using their purchasing power as a means of protest on #BlackOutDay2020
Africa NewsAsia NewsLatest NewsPoliticsUS NewsWorld News

‘This is the only way to get real change’: How Black Americans are using their purchasing power as a means of protest on #BlackOutDay2020

Black Americans are being encouraged to halt their spending or to redirect it exclusively to Black-owned businesses on Tuesday in an act of protesting the country’s ongoing issues of racial injustice and inequality as part of #BlackOutDay2020.

The #BlackOutDay2020 movement and Blackout Coalition were started by a Texas man named Calvin Martyr as an effort to reveal the impact of the Black dollar and to further unify the Black community on the basis of economic power. “Our mission is to create an international community of economic solidarity and national consciousness unified around our common experience and ancestry as Emancipated Peoples of America,” a statement on the Blackout Day website reads.

According to a 2019 Nielsen report about Black consumers, the purchasing power of Black Americans is over $1 trillion. In a video on Instagram, Martyr explains how keeping that money within Black businesses is a way to ensure that the Black community can survive and thrive on its own. “All of the other communities around us are depending on our dollars for survival. We’re their main customers; this is why they fear us communicating and uniting our economic power for each other, because then they know their pockets will suffer,” he says. “This is the only way to get real change. Rioting is dead, hashtags is dead, protests is dead. We have to unite our economic power. And it has to be unapologetic.”

To do so, Martyr and the Blackout Coalition started a Blackout Directory of Black-owned businesses throughout various cities and states so that supporters can be pointed in the direction of stores, restaurants, salons and other businesses, where they are encouraged to spend their money. “We need to know community centers, we need to know hotels, we need to know places of entertainment,” Martyr said in his Instagram video. He did not immediately respond to Yahoo Life’s request for comment.

The Blackout Coalition additionally shared alternatives to spending money on Tuesday with an infographic on social media, emphasizing that support should go to Black-owned businesses if people believe they must spend money somewhere. 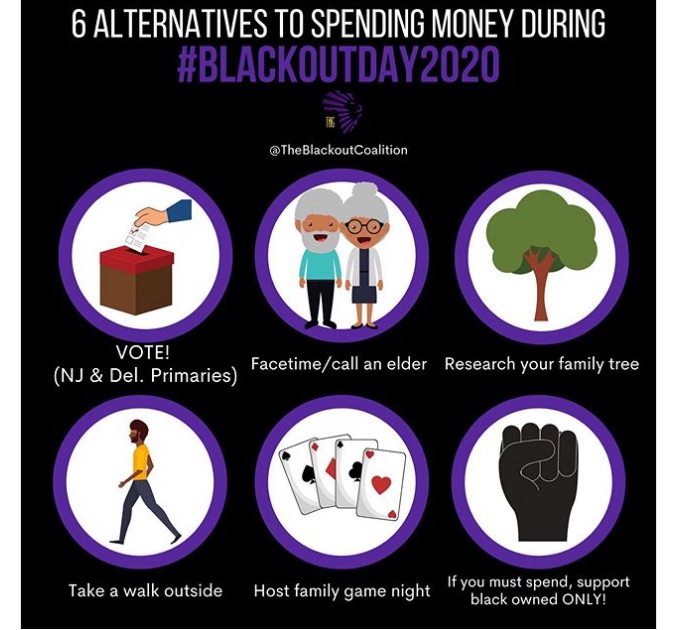 OneUnited Bank, the largest Black-owned bank in America, has even shared its support of the national financial movement. “As the largest Black-owned bank in America, we’re compelled to play a leadership role to galvanize our community and allies in support of #BlackOutDay2020 and to fight for social justice,” Kevin Cohee, chairman and CEO of OneUnited Bank, says in a press release on its website. “We need to use our power — both our spending power, our vote and our voice — to demand criminal justice reform and to address income inequality.”

The bank’s statement more specifically speaks to the $1.2 trillion in annual spending that Black Americans aggregate and just how that can be used to make a powerful statement and result in progress for the community. OneUnited Bank also says that it has supported similar movements in the past, including the push for Black Americans to put their money into Black-owned banks.

Two brands working in tandem with #BlackoutDay2020 are WeBuyBlack, the largest e-marketplace for Black-owned business, and My Black Receipt, which holds supporters accountable by collecting receipts that demonstrate monetary support of Black businesses. The latter was started on Juneteenth with the expectation of collecting receipts until July 4. In a statement on its website, My Black Receipt adjusted its goals to have receipts totaling $5 million spent on Black businesses by Monday, one day before #BlackoutDay2020. 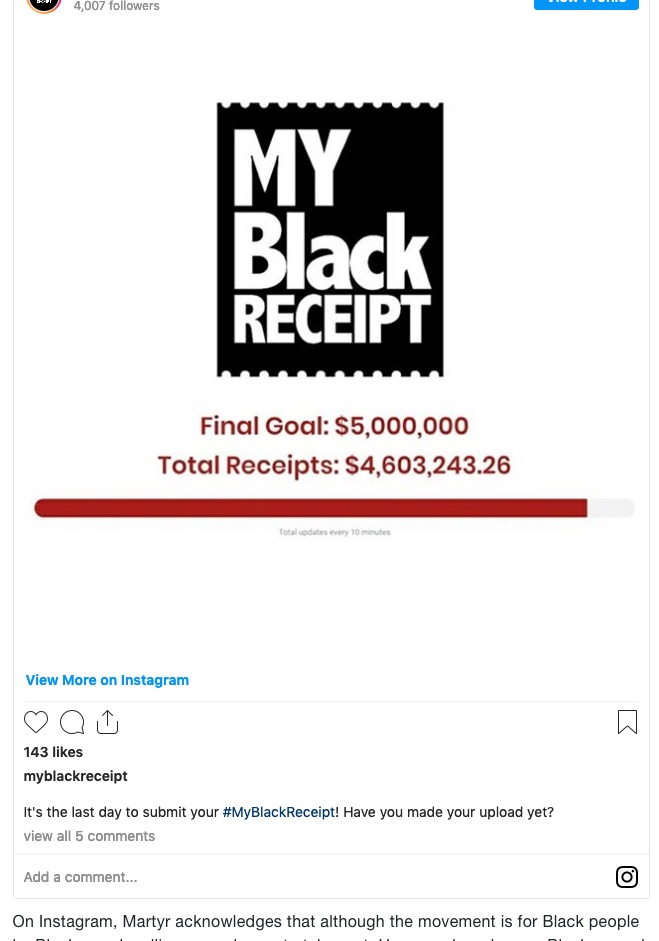 On Instagram, Martyr acknowledges that although the movement is for Black people by Black people, allies are welcome to take part. He even shared a non-Black-owned brand’s message of solidarity on Twitter after it had announced that its website will be shut down on Tuesday so that people are more inclined to buy from Black-owned businesses. 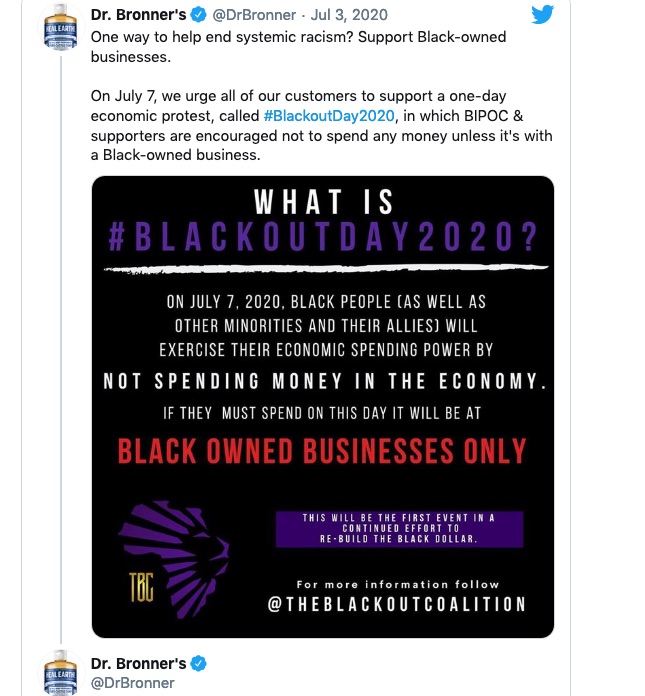 As for the future of economic freedom for Black Americans, Martyr hopes that the financial blackout will start as a daylong protest before evolving into something larger. “The vision is one day, and then we’ll organize a week, and then we’ll organize a month, and then we will organize a quarter, a year, whatever we want to do. And eventually a way of life,” he says on Instagram. “This is not the kind of movement that’s about one person — it’s about all of us; it’s about all of our efforts, all of our unity. I’m telling you, the things we can do are unlimited if we are unified.”