Last month when the World Health Organization dubbed the coronavirus outbreak a pandemic, State Department officials gave Robin Gallite and her husband Alli, both 41, a choice: Return to the U.S. from Lagos, Nigeria, quickly before the country’s airports closed and the health-care system deteriorated, or stay with their 16-month-old daughter, Nike, and risk getting stuck in the country.

After applying for her adoption in 2018, Robin and Alli took home Adenike-Rae—“Nike” for short—in August from Cross River, a Nigerian state bordering Cameroon. The couple planned to stay with Alli’s family in Lagos for several months while they waited for Nike’s adoption to be finalized by local officials and until they received a U.S. visa for their daughter. They had wanted to spend time with Alli’s family before returning home to the U.S. so Robin could introduce Nike to her own mother. The couple had heard from other parents that obtaining a visa for adopted Nigerian children took months, but they were optimistic about being able to fly back to the U.S. with their daughter in the spring of 2020.

That confidence quickly faded. In February, President Donald Trump placed Nigeria on his travel ban list along with other countries with predominantly large Muslim populations. Weeks later, the coronavirus epidemic ballooned, causing the closure of borders around the world and forcing Americans like Alli and Robin to scramble to find a way out on evacuation flights. The dual events left the couple with a harrowing choice: Even if they were to get on one of the few flights out of Lagos, officials told them that they would not be able to bring their daughter with them.

Alli and Robin’s story may be uniquely traumatic. But it highlights the emotional and logistical difficulties many Americans are facing in trying to get back to the U.S.—difficulties that include trying to book evacuation flights, having to uproot professional and familial structures, and being forced to deal with inconsistent communication with U.S. consulate representatives. The couple’s situation exposes the real-life limitations Americans face in trying to repatriate from a country under Trump’s travel ban and raises questions about how the State Department is handling already in-process visa applications during the coronavirus outbreak.

“When the pandemic hit, we were like ‘OK, we really need to get home to our families.’ And [the consulate’s] communication was ‘well you can get home to your families.’ But we couldn’t. We didn’t have the visa,” Robin said. The latest communication the couple received was in an email from the State Department. “It was something along the lines of ‘Yes, we’re very much aware of Robin’s case and it’s still processing,’” Robin said.

The State Department did not respond to a request for comment for this story.

As of Thursday, Robin, Alli, and Nike are still in Lagos. From their home there, the couple told The Daily Beast about their months-long struggle to try to get their daughter home to Colorado. Since the president’s February proclamation, Robin and Alli said they have continuously tried to seek guidance from State Department officials about why their child’s visa was held up and how the travel ban could affect her case. They have asked U.S. representatives—including Sen. Kirsten Gillibrand (D-NY), a prominent advocate for adoption—to help get the family home in one unit.

‘I’m a Full Nomad’: The Americans Fighting to Get Home

Robin, a deputy executive director of nonprofit art center Redline in Denver, and her husband Adebambo Alli, who goes by “Alli,” had for years thought about adopting a child. Nigeria was a natural place for them to look. Alli was born in the U.S. but spent his adolescence in Nigeria and still has dozens of family members living there. “When we decided we were going to adopt, Nigeria was the clear choice,” Robin said. “So we decided to go down the adoption path and I have to say… things were really brilliant for us.”

The adoption process can be grueling for some parents. At times it can take years for agencies to match individuals with children in need of a home. But for Robin and Allison, the process of adopting Nike went smoothly. They found out within one year that they would be able to adopt her from Cross River State because of Alli’s descent. (It’s more difficult for couples without Nigerian passports to adopt outside of Lagos.)

Robin and Alli said they flew to Nigeria in August to meet Nike but they were not sure how long it would take to hold their daughter in their arms. Usually, Robin said, parents have to wait to gain custody of their children and even longer to legally adopt them.

“That whole situation for us was like magic that we were able to find our daughter, who at the time was only 9 months old,” Robin said. “We were able to take custody of her on the same day.”

Nike’s adoption was finalized in October and Robin and Alli applied for Nike’s visa in November, thinking it would only take them a few months to collect the necessary paperwork and fly back to Colorado.

For months, the plans appeared to be on track. Robin and Alli bonded with their daughter, taking her to the beach and introducing her to their family and friends in the country. In photos sent to The Daily Beast, Nike is smiling, leaning on her mother and father’s shoulders, dressed in delicate flower dresses. From those snapshots, it looks as if the three have been together forever. It’s clear Nike knows who her parents are. 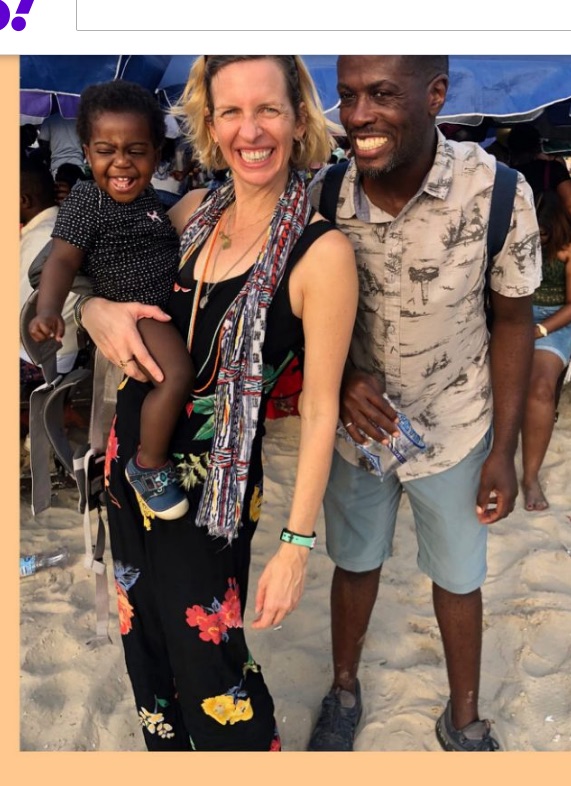 Alli and Robin never anticipated that a day would come where they’d have to think about going a day without Nike by their side, they said. But as the months rolled on and the State Department continued to dodge questions about Nike’s visa, worry set in.

“We thought by January, ‘OK this is getting a lot longer than we expected,’” Alli said.

Soon, fairly commonplace bureaucratic holdups turned into major geopolitical complications. On Feb. 21, the Trump administration announced a travel ban on Nigeria that barred Nigerian nationals from entering the U.S. because, among other rationales, the government “does not adequately share public-safety and terrorism-related information, which is necessary for the protection of the national security and public safety of the United States.” 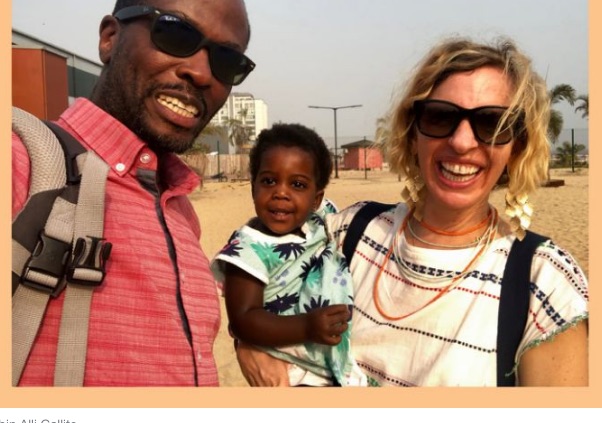 “A lot of these people put on hold because of the travel ban are highly educated folks and go-getters and they wouldn’t be a burden on the system. If anything, they’d be an add,” Alli said. “It just seems like for whatever reason everyone has flagged Nigeria as non-productive… or a Muslim country. They worry about security, which is very biased if you ask me.”

There was a small glimmer of hope, however. Trump’s announcement said the U.S. would ban Nigerians from entering the country, but it did not say anything about visa applications that were already in process before the ban went into place. Nevertheless, by February, Alli said, they were beginning to get “a little worried.” It was then that they decided to reach out to their contacts in the U.S., including staffers for Gillibrand and Sen. Michael Bennett (D-CO), for answers.

“We found out that the consulate was handing out visas on a case-by-case basis,” Robin said. “But there were no clear answers from the State Department. It was really vague on how the travel ban was going to impact adoptees. Officials in the department were telling us ‘Oh, don’t worry this isn’t going to affect you.’ But there wasn’t clear language in the proclamation that said that.”

Soon, another global event would alter their plans. The outbreak of the novel coronavirus was initially disrupting travel only between the U.S. and China. But as the pandemic worsened, the administration began to put restrictions on other countries as well. As the borders closed, Trump officials, via U.S. consulates, began sending messages to Americans traveling overseas encouraging them to come back home. Nigeria has so far only reported about 170 cases, with two deaths, but there is a wide-scale lack of testing.

“We really believed we’d be OK. My husband was already talking about what it would be like to take a 16-month-old on the plane. I was like ‘Ah I don’t care we just need to get on a plane and get home,’” Robin said. “I don’t think we had much trust in the U.S. government at this point but at the same time we didn’t see any reason they wouldn’t just issue the visa.”

But Robin and Alli didn’t get the visa for Nike. They were offered seats on an evacuation flight from Lagos this week, but no ticket for their child. The choice to stay or go wasn’t one Robin and Alli were willing to entertain. Nike was theirs. Period. And there was not a chance Robin and Alli were going to leave their daughter on the hope that she would one day receive a visa, they said. The mere fact that officials at the U.S. consulate in Lagos offered the option to leave her behind was unworldly.

“We don’t have any other children and this will probably be our only child,” Robin said. “She’s so easy and great. We’re really lucky.” 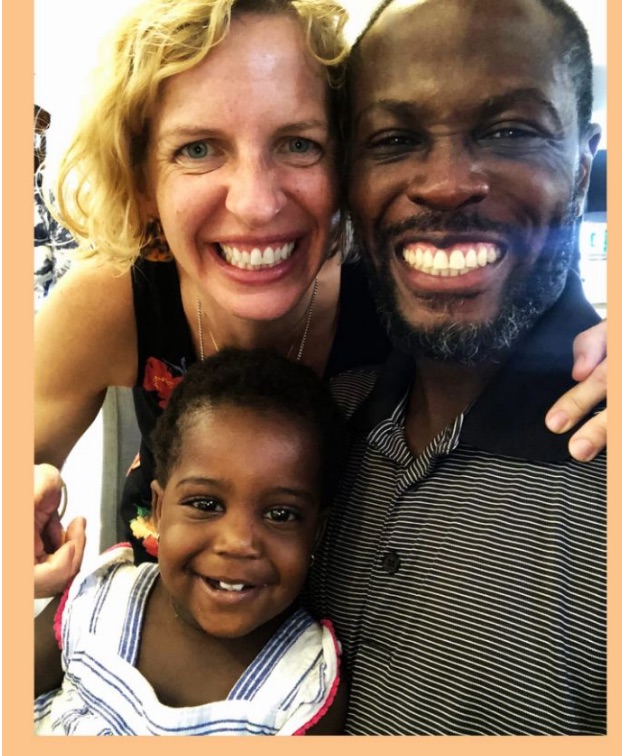 Robin said the consulate in Lagos last month finished conducting interviews with the orphanage in Cross River State, which is usually the last step before a visa is issued. It’s still unclear exactly when the couple will be able to return home to Colorado and if the travel ban will limit them from doing so. Over the last few weeks, Robin has been in touch with her family and friends back home in the U.S., providing them with daily updates about their plans to get home and with photos of Nike.

“The travel ban— it really is a Muslim travel ban in my opinion. It’s a racist, bigoted policy put in place by the president,” Robin said. “The whole time after it was put in place I was thinking: But they certainly wouldn’t do this to a child. But in my mind, they don’t care who it is. As long as it’s a Nigerian citizen.”

African elite who once sought treatment abroad are grounded

African Immigrants in Europe: Their Present and...

No, France. Africa is not your testing...