Herman Cain, a Republican politician and 2011 primary candidate for the party’s presidential nominee, has been hospitalized after testing positive for Covid-19.

Mr Cain, a conservative columnist and former CEO of Godfather’s Pizza, is currently being treated in an Atlanta-area hospital.

A spokesman for the 74-year-old released a statement on Twitter on Thursday saying: “On Monday, June 29, Herman Cain was informed that he had tested positive for Covid-19. By Wednesday, July 1, Mr Cain had developed symptoms serious enough that he requires hospitalizations.”

Mr Cain is not on a respirator and is “awake and alert” according to the statement.

He is an ally of President Donald Trump – he serves as co-chair of Black Voices for Trump – and attended the president’s rally in Tulsa, Oklahoma, on 20 June. At least two of the president’s staffers at that event tested positive for the coronavirus in the days following the rally.

Video from the rally shows Mr Cain with other supporters sitting in the crowd while not wearing a mask.

“There is no way of knowing for sure how or where Mr Cain contracted the coronavirus, but we do know he is a fighter who has beaten Stage 4 cancer,” the statement said.

Dan Calabrese, the editor of HermanCain.com, addressed speculation that Mr Cain contracted the virus while attending the rally in a blog post on Thursday. 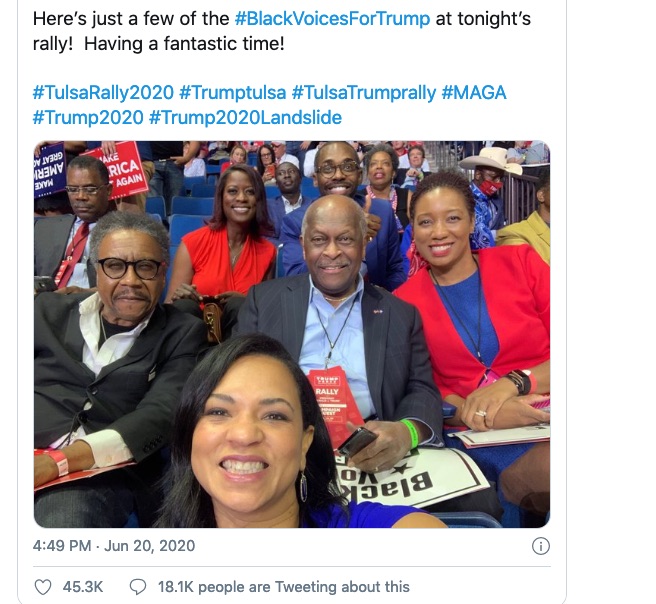 “We honestly have no idea where he contracted it. I realise people will speculate about the Tulsa rally, but Herman did a lot of traveling the past week, including to Arizona where cases are spiking. I don’t think there’s any way to trace this to the one specific contact that caused him to be infected,” Mr Calabrese wrote. “We’ll never know.”