As President Trump’s claims of election cheating fall apart in court filings, he is taking his followers down a path of increasingly unhinged conspiracies about millions of votes being altered by mysterious forces manipulating computer systems and voting machines.

“That really is, really, I think, the Island of the Misfit Toys at that point. You have crossed the Rubicon, you jumped on the crazy train and you’re headed into the cliffs that guard the flat earth at that time, brother,” said Rep. Denver Riggleman, a Republican congressman from Virginia, in an interview.

Riggleman has been one of the few Republican members of Congress telling the truth about the 2020 election. He also, not coincidentally, will be out of office himself on Jan. 1, at the end of his first term. 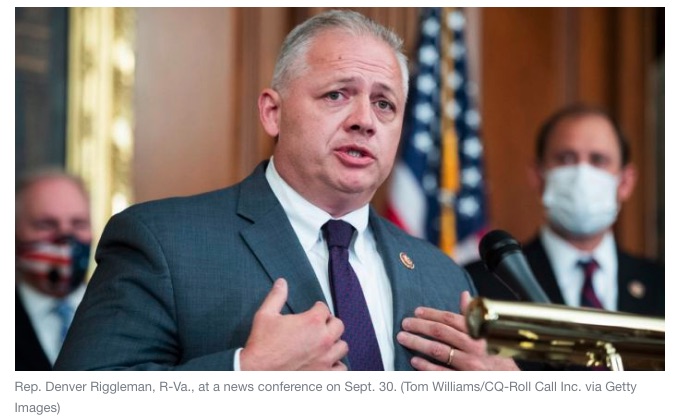 “We have a new president-elect,” said Riggleman, who was elected two years ago to represent Virginia’s Fifth Congressional District, which stretches from the distant exurbs of Washington, D.C., south through parts of Charlottesville and beyond.

Riggleman angered Virginia Republicans by officiating at a wedding between two men a year ago and was defeated in the Republican primary last summer by Bob Good, who describes himself as a “biblical conservative.”

Riggleman said those who deny that Democrat Joe Biden will be the next president are part of an overall descent into “the dissolution of reason.”

And Republican politicians in Washington have to stop avoiding reality and show some leadership, he said. “You have to have people brave enough, where the election is not more important than the integrity of the state.”

That bravery has been in short supply inside the Republican Party since the election was called for Biden on Saturday, Nov. 7. Only a handful of Republican senators have recognized Biden as president-elect: Ben Sasse of Nebraska, Mitt Romney of Utah, Lisa Murkowski of Alaska and Susan Collins of Maine.

Senate Majority Leader Mitch McConnell has not acknowledged Biden’s victory, and Riggleman echoed what Republicans on Capitol Hill have said privately: that McConnell wants to keep Republican voters in Georgia motivated to turn out for the two Senate runoff elections scheduled for Jan. 5, which could decide control of the Senate. Breaking with Trump could dishearten rank-and-file Republicans.

Other Republican senators — most prominently Josh Hawley of Missouri, Ted Cruz of Texas and Lindsey Graham of South Carolina — are actually spreading lies about cheating or a lack of election oversight because they want to run for president in 2024, Riggleman said. They know Trump has lost, but they don’t want to tell his supporters that, because they want these same supporters to transfer their allegiance to them. To tell the truth would be to risk that support.

And this refusal to recognize reality is creating space for rank-and-file Republican voters and Trump supporters to move farther down rabbit holes of unreality, something that Riggleman has spent a lot of time thinking about due to his background as an Air Force intelligence officer.

Riggleman co-sponsored a resolution in August with Rep. Tom Malinowski, D-N.J., to condemn the conspiracy-theory cult QAnon, which indoctrinates followers into a bizarre myth that Trump is fighting to expose a child-trafficking ring run by Democrats and “global elites.”

The tentacles of QAnon-adjacent memes and conspiracy theories reach well beyond the cult’s core audience, however, poisoning the online information ecosystem for many Americans who may not even know they are being influenced by the movement.

Riggleman said that solutions are needed to help “deprogram” individuals caught up in these conspiracies, but that there are also institutional needs to address misinformation at scale.

“You almost need public trust analyst companies or analytical companies that can identify the insanity of some of these theories and actually then chart the cascading effects of that throughout the entire [online] network,” he said.

“If we don’t start deprogramming people, I think you’re going to see worse and worse things happen,” Riggleman said, expressing concern about a rise in violence such as the 1995 Oklahoma City truck-bomb attack by terrorist Timothy McVeigh that killed 168 people.

“Listen, we’re not that far removed from McVeigh, and I think we got to be very careful about radicalization. This is no different than how people radicalize online everywhere else,” Riggleman said.

Riggleman pointed out that the two men arrested outside the Philadelphia Convention Center with unregistered firearms on Nov. 5, as city workers counted mail ballots inside, are supporters of a Virginia state senator who is running for governor in 2021: Amanda Chase.

The two men, Anthony LaMotta and Joshua Macias, have appeared at rallies and in photos with Chase, who on Wednesday was promoting the same baseless conspiracy theories about voting machines and computers changing vote totals that Trump then tweeted about on Thursday.

The British Monarchs Terrified, and ‘had concerns...