President Donald Trump’s determination to preserve iconic statues and monuments is so profound and all-consuming that he’s apparently extending his policy abroad.

In a round of new digital ads, the Trump re-elect asks people to support the president as he stands up to the angry mobs trying to tear down iconic memorials. In one specific ad, the endangered statue that the campaign spotlights happens to be the famous Christ the Redeemer statue in Rio de Janeiro, Brazil.

“The President wants to know who stood with him against the Radical Left,” declared dozens of ads run over the weekend on pages for Trump and Vice President Mike Pence. The ads featured a graphic with an image of the Christ the Redeemer statue above the text, “WE WILL PROTECT THIS.” The photo appears to have come from an online database of free stock images. 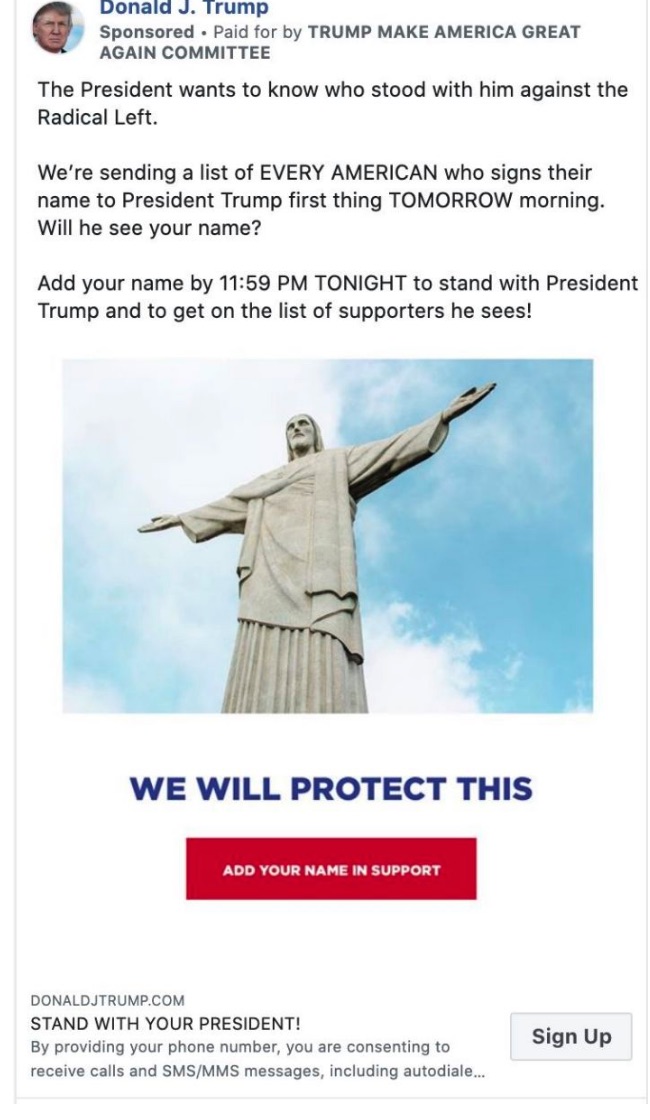 The ads, which ran on Facebook and Instagram, come as the Trump campaign is increasingly focused on the destruction and removal of historic monuments and statues by protesters around the country—many of them relics of the Jim Crow era but others tied to colonial America and even some honoring abolitionist and civil-rights icons. Trump focused significant attention on the matter during a speech at Mount Rushmore over the Fourth of July weekend.

Unlike the statues Trump and his team have focused on to date, though, Christ the Redeemer is not in the United States. There’s no indication that the 125-foot sculpture, which sits at the peak of Corcovado mountain overlooking Rio, is at risk of vandalism or removal. It’s also not clear how Trump or Pence might go about protecting it if it were threatened, which, again, it does not appear to be.

There have been demonstrations against other famous likenesses of Jesus Christ around the world; in India, Hindu nationalists recently protested plans for a new statue that could rival Christ the Redeemer in size. But the Brazilian statue doesn’t appear to have been targeted. Indeed, it’s been used instead to promote messages of unity and perseverance as Brazil reels from a huge outbreak of coronavirus in the country.

Trump has vowed to protect statues of Jesus Christ in the United States, and has railed against calls from some progressives, notably a one-time spokesperson for Sen. Bernie Sanders’ (I-VT) presidential campaign, to remove or replace Christian imagery.

It was not immediately clear whether the Trump campaign was aware that the image it chose for its Facebook ads over the weekend showed a statue in another country.

According to Facebook political ad data, the Trump Make America Great Again Committee, a joint fundraising account for the Trump campaign and the Republican National Committee, paid between $14,000 and $22,000 to promote 67 versions of the ad on Facebook and Instagram. The ads, which began running on Friday and are now inactive, were viewed between 930,000 and 1.1 million times, according to Facebook data.

In addition to making the preservation of American statues and monuments a cornerstone of his re-election campaign over the past week, Trump has signed an executive order creating an Interagency Task Force for Building and Rebuilding Monuments to American Heroes, commissioning a new “National Garden” featuring likenesses of a number of famous Americans, and calling for stepped-up prosecution of people who damage or remove federally owned statues and monuments.

“Our people have a great memory,” Trump said during his Mount Rushmore speech. “They will never forget the destruction of statues and monuments to George Washington, Abraham Lincoln, Ulysses S. Grant, abolitionists, and many others.”

Arrests follow protests that killed at least 166 in Ethiopia

In Russia and Ukraine, no social distance on crowded beaches

Biden’s message to world: ‘America is back’...

A former Trump State Department-appointee is among...