Trump: ‘I was never a fan of Harvey Weinstein’

President Trump said Tuesday he was “never a fan” of Harvey Weinstein, a day after the disgraced movie mogul was convicted of two sex crimes in the most high-profile case of the so-called #MeToo movement.

“I was never a fan of Harvey Weinstein,” Trump told reporters in New Delhi, where he took questions at the end of a two-day trip to India. “He was a person I never liked. … I was just not a fan of his. I knew him a little bit. The people that liked him were the Democrats. Michelle Obama loved him, loved him. Hillary Clinton loved him.

“He gave a lot of money to the Democrats, and my question is, will the Democrats be asking for that money back?” Trump said, in language that apparently misstated his intended meaning.

Weinstein, a longtime Democratic donor, was found guilty on two of five counts — criminal sexual act in the first degree and rape in the third degree — in incidents involving two women. The first count carries a minimum punishment of five years and a maximum of 25 years in prison, while the second is punishable by up to four years of probation.

Numerous women, including some well-known actresses, have accused Weinstein of sexual assault. He has said the encounters in question were consensual.

With his brother, Bob, Weinstein formed a production company in 2005, and became one of the most powerful producers in the film industry. The Weinstein Co. declared bankruptcy in 2018.
Trump frequently comments about movies he admires, a list that includes “Gone With the Wind,” “The Good, the Bad and the Ugly” and “Goodfellas.” Weinstein was known in part for highbrow films such as “Shakespeare in Love” and “The King’s Speech,” which didn’t make Trump’s list. In a 2013 tweet he called “Django Unchained,” which was co-distributed by Weinstein’s company, “the most racist movie I have ever seen,” adding: “It sucked.” 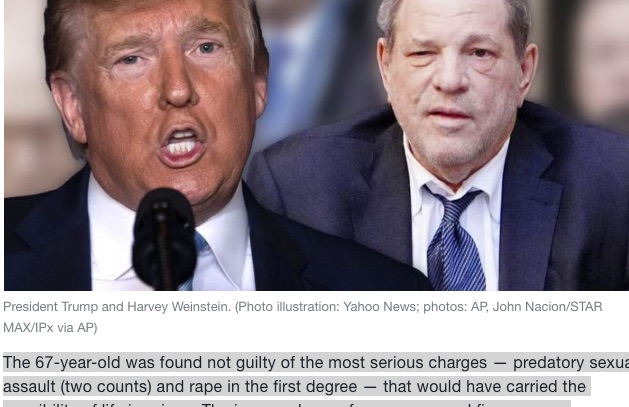 The 67-year-old was found not guilty of the most serious charges — predatory sexual assault (two counts) and rape in the first degree — that would have carried the possibility of life in prison. The jury, made up of seven men and five women, delivered the verdict on Monday, nearly a week after beginning deliberations.

The judge in the case ordered Weinstein be taken into custody until his sentencing on March 11. He was transported to Bellevue Hospital in New York after complaining of chest pains while en route to jail.

Asked specifically about what message the verdict sends to women, Trump said he was not familiar with the particulars of the case.

“I don’t know the actual results,” he said. “From the standpoint of women, I think it was a great thing and it sends a very strong message.”

Trump himself has been accused by more than 20 women of sexual misconduct ranging from inappropriate touching to rape. He has denied the allegations while disparaging his accusers, and has never been charged with a crime.