‘Trump is my president’: Protesters gather in DC a day before Congress certifies election, clash with police at night

By Tuesday night, DC police had announced six protest-related arrests. The Metropolitan Police Department made five arrests — three men, two women — with charges ranging from carrying a pistol without a license to assault of a police officer, according to a spokesman.

The spokesman added the U.S. Park Police also made one arrest.

Fervent Trump supporters are convening in D.C. this week to contest what they call a rigged election, despite a lack of evidence of widespread voter fraud. The rallies coincide with a congressional vote to certify President-elect Joe Biden’s win in the Electoral College on Wednesday.

Before noon Tuesday, hundreds of people gathered on Freedom Plaza near the White House, many waving Trump and American flags. Vendors ringing the plaza briskly sold flag-themed hats and shirts, emblazoned with sayings from “Stop the steal” to “Trump is my president.”

“If you count the real votes, he won the election,” Swinney said, referring to an unproven claim that many votes for Biden were illegal or cast late. “You’d have to have your head in the sand to not know there was cheating going on.”

Election security experts, state officials, judges, and independent observers across the USA have found no evidence of widespread voter fraud.

Swinney’s friend Marcus Wren, who waved a “Don’t Tread On Me” flag, said patriots like them would keep Biden from taking office.

“Enlightened patriots will stand up and say, ‘This will not stand,’ and they will be forced to stop it,” said Wren, 67, who owns a bottled water company in Louisiana. “If someone doesn’t stand up, our republic will be gone.”

Swinney said that based on crowd sizes, he believes Trump easily has more support than Biden. Wren referred to the “deep state” attempting to steal the election, a conspiracy theory about a group of powerful elites that allegedly run government and society. 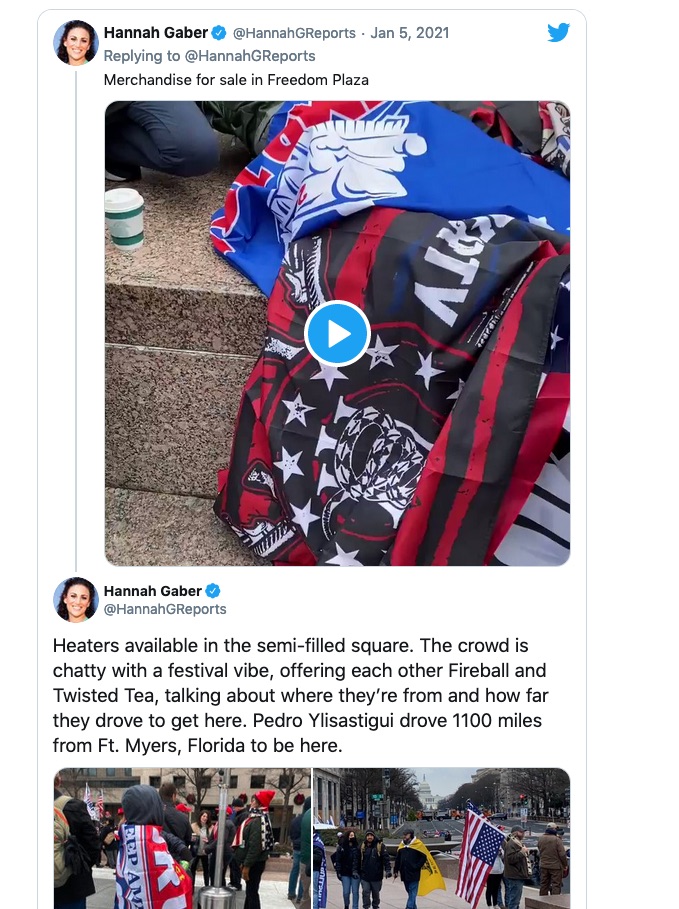 Swinney and Wren said they hope the House of Representatives will refuse to certify the electors Wednesday, throwing the election to state delegations, which they said would back Trump.

Many businesses were boarded up or ringed by security fencing, including St. John’s Church of Lafayette Square. Restaurants and other businesses were closed, citing area road closures and possible violence.

Tuesday’s gatherings were billed as a “pre-rally” before the main event Wednesday. Trump said he’ll make an address.

Some Republican lawmakers plan to challenge the vote when Congress meets Wednesday to confirm Biden’s win. Though the attempt is certain to stir debate and draw out what would otherwise be a procedural vote, their efforts aren’t likely to change the results of the election.

Trump promised to attend the rallies Wednesday and promoted the events on Twitter. “I will be there. Historic day!” Trump tweeted Sunday, sharing a tweet from a rally organizer.

D.C. authorities took precautions against potential violence at the rallies.

The Proud Boys, a far-right extremist group, said members would attend, but their plans may be complicated by their chairman’s arrest Monday.

Enrique Tarrio was on a phone call with a USA TODAY reporter when the call was interrupted by sirens and he was arrested. He was charged with destruction of property in connection with an incident last month when Tarrio was accused of setting fire to a Black Lives Matter banner after a Trump rally, according to the Metropolitan Police Department. The banner had been taken from a historic Black church.

Warnock makes history with Senate win as Dems near majority