Donald Trump spent his weekend at Bedminster, New Jersey resort, in the company of scandal-hit ex-NFL quarterback Brett Favre before toasting wealthy prospective donors at an evening fundraiser for his re-election campaign on Saturday, then taking to Twitter to brag about his exploits on Sunday.

While the president was enjoying himself, the year’s first tropical storm from the Atlantic – Hurricane Hanna – made landfall in southern Texas, as it downgraded to a tropical storm, and the US passed 1,000 deaths from the coronavirus for the fifth straight day.

On Sunday, White House Task Force member Admiral Brett Giroir admitted that the administration’s Covid-19 testing turnaround was still too slow and that more needed to be done as Trump chief of staff Mark Meadows put his faith in “American ingenuity” to lead the country out of the pandemic.

White House economist Larry Kudlow told CNN that he doesn’t buy that the US is experiencing an economic downtown despite 11 per cent unemployment.

Asked whether the US made a mistake reopening too fast, prolonging damage to the economy, Mr Kudlow says there are housing, real estate and automotive booms. “And the jobs picture remains strong,” he said.

Millions of out-of-work Americans continued filing for unemployment last week, though a federal boost to unemployment insurance benefits ended this week, and Congress has not agreed to extend the additional relief. But Mr Kudlow said Americans can expect a second $1,200 stimulus cheque in the fall as pandemic rages on.

The latest round of poll numbers show that the president is falling behind his Democratic rival Joe Biden in several key battleground states that the president won in 2016 less than 100 days ahead of the November general election.

Roughly eight in 10 Americans believe the US is headed in the wrong direction, a record high in Mr Trump’s term, according to a recent survey conducted by the Associated Press and the NORC Centre for Public Affairs Research.

Meanwhile Black Lives Matter protesters in several West Coast cities continue to resist federal officers’ brute force as elected officials demand that the president withdraw the agents from their cities, which have endued more than 50 days of protests against police brutality in the wake of the police killing of George Floyd. Police in Portland, Oregon and Seattle declared riots after small groups set fires and compromised fencing at federal properties.

Donald Trump spent his Saturday golfing at his resort in Bedminster, New Jersey, in the company of scandal-hit ex-NFL quarterback Brett Favre before toasting wealthy prospective donors at an evening fundraiser for his re-election campaign.

A legend of the game known for his 15-year tenure with the Green Bay Packers and inducted into the sport’s Pro Football Hall of Fame in 2016, Favre’s reputation was marred somewhat by unsolicited sexting allegations a decade ago.

But while the president was enjoying himself, the US found itself facing threats on three separate fronts – more on which shortly. 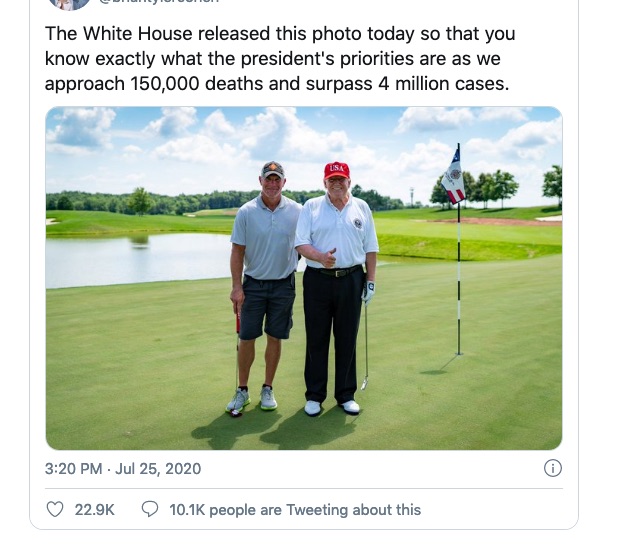 AP Was There: Nelson Mandela released from...

Police Looking for Man Who Was Seen...