A New York judge has dismissed president Donald Trump’s attempt to delay a defamation lawsuit brought against him by a woman who accused him of rape.

The decision, released on Thursday, states that the presidency does not shield him from the case.

Writer E Jean Carroll is suing Mr Trump for defamation after he denied her allegations that he raped her in a New York department store in the mid-1990s and called her a liar.

The Trump legal team argues that an appeals court decision for a similar lawsuit would determine whether state courts have jurisdiction over the president while he is in office.

That suit was filed by Summer Zervos, a contestant on The Apprentice who alleges that Mr Trump sexually assaulted her in 2007. The president denies the allegation.

Mr Trump’s legal team can appeal the decision. They have not yet responded to a request for comment.

Roberta Kaplan, partner at Kaplan Hecker & Fink, and counsel for E Jean Carroll said in a statement: “We are very gratified that Judge Saunders, recognising the clear holding of the Supreme Court in Vance, has rejected President Trump’s assertion of absolute immunity and has denied his motion to stay E Jean Carroll’s case.”

She continues: “We are now eager to move forward with discovery so that we can prove that Donald Trump defamed E Jean Carroll when he lied about her in connection with her brave decision to tell the truth about the fact that Donald Trump had sexually assaulted her.”

Ms Carroll is seeking a sample of Mr Trump’s DNA as potential evidence to determine whether his genetic material is on the dress she wore during the encounter.

Ms Carroll’s allegations against the president were first made public in June 2019 while publicizing her book What Do We Need Men For? A Modest Proposal. In the book she describes the alleged attack by Mr Trump in a dressing room at Bergdorf Goodman in late 1995 or early 1996. 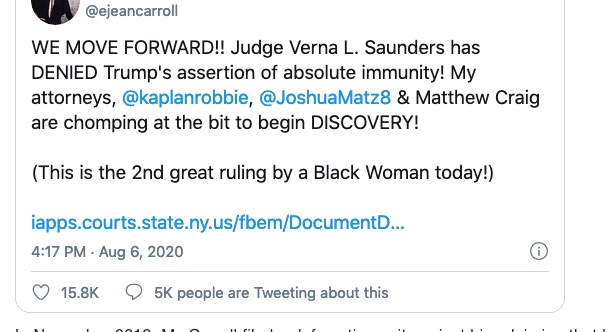 In November 2019, Ms Carroll filed a defamation suit against him claiming that he smeared her and damaged her career as an advice columnist.

Mr Trump said Ms Carroll was “totally lying” to sell more copies of her book and that they had never met. A photo taken in 1987 shows them together, but the president says they were just standing in line at an event.

In the suit Ms Carroll is seeking damages and a retraction of Mr Trump’s statements about her.

In an earlier attempt at dismissing the case it was claimed that the president couldn’t be sued in New York as he was not resident there. Mr Trump undermined the argument himself by declaring on a call with the nation’s governors that he lives in Manhattan.

The motion was withdrawn by Mr Trump’s lawyers.

Republicans push Kanye 2020. But will it really hurt Biden?

Leap of faith: Nigerian boy captivates the world with his ballet