President Trump is apparently watching at least parts of the Democratic National Convention.

“Somebody please explain to @MichelleObama that Donald J. Trump would not be here, in the beautiful White House, if it weren’t for the job done by your husband, Barack Obama,” Trump wrote. “Biden was merely an afterthought, a good reason for that very late & unenthusiastic endorsement.”

Trump went on to tout the economy under his administration. “Sit back & watch!” he exclaimed. 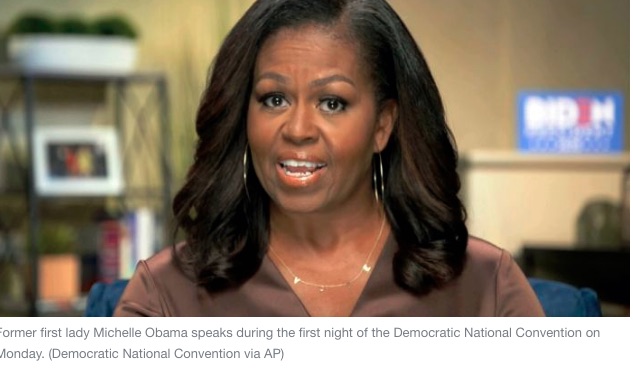 In her virtual speech to the convention, Michelle Obama presented a sharp case against Trump, who she said was “clearly in over his head” amid the current challenges facing the Oval Office, including the coronavirus pandemic, which has now killed over 170,000 Americans and infected millions more, according to the latest tracking data from Johns Hopkins University.

“Whenever we look to this White House for some leadership, or consolation, or any semblance of steadiness, what we get instead is chaos, division, and a total and utter lack of empathy,” said Obama.

At a Tuesday morning White House event, Trump further sought to use her own words against her: 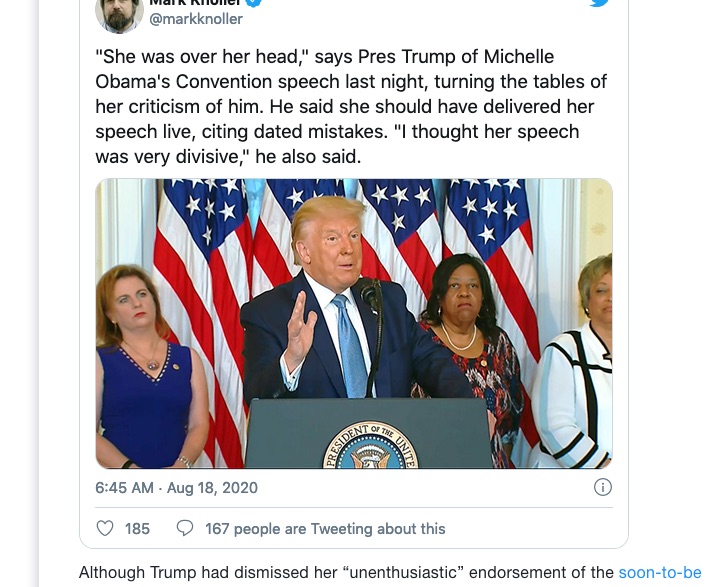 “I know Joe,” she said in Monday’s speech. “He is a profoundly decent man guided by faith. He was a terrific vice president. He knows what it takes to rescue an economy, beat back a pandemic and lead our country.”

In various tweets Monday and Tuesday, Trump further responded to New York Gov. Andrew Cuomo, who also gave a notable address to the Democratic convention’s first night. Cuomo delivered a forceful rebuttal to Trump on coronavirus; Trump responded by tweeting past praise Cuomo had given him and declared that thousands of New Yorkers died because of the governor’s “total incompetence.”

Democrats have three more nights of convention speakers before Trump and the Republicans hold their own virtual convention next week.

Nigeria to reopen airports for international flights from Aug. 29