Trump Retweets Video Of ‘White Power’. Our Emperor has No Clothes

Trump Retweets Video Of ‘White Power’. Let’s face the obvious fact. Our Emperor has No Clothes

A video shared by President Trump on Twitter Sunday includes a man who appears to be a Trump supporter saying “white power” in response to protesters. This is not the first time that Trump has lend his support to the White Racist Organization. It’s now routine for Trump to retweet racist organizations’ tweets and conspiracy theorists.

Its time someone tells our Emperor that he has no Clothes. The United States of America is a great country that cannot continue on this path.

In the video, apparently taken at The Villages, a retirement community in Florida, people wearing Trump shirts and with Trump signs on their golf carts drive by protesters yelling insults at them and about the president. 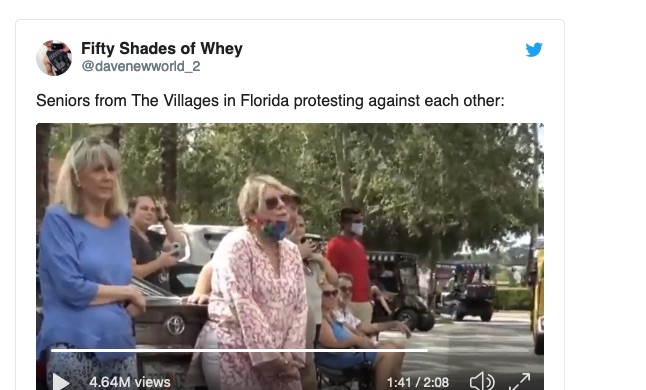 In one exchange — eight seconds into the two-minute video — a white man holding a sign that says “Make America Sane Again,” a reference to Trump’s campaign slogan, yells: “Where’s your white hood?” In response, a white man driving a golf cart with signs reading “Trump 2020” and “America First” yells back “white power.”

Trump retweeted the video of someone shouting racist slogans of White Power!

The data is in: Fox News may have kept millions from taking the coronavirus threat seriously