WASHINGTON — President Donald Trump retweeted a video Monday morning of a white man and woman brandishing a semi-automatic rifle and a handgun at peaceful Black protesters in St. Louis over the weekend, amplifying a surreal scene that embodied the racial divisions roiling the country.

Trump’s promotion of the St. Louis confrontation was the second time in two days that the president used his social media platforms — which he often credits with allowing him to circumvent mainstream news outlets — to exacerbate racial divisions as Americans have been protesting police brutality and demanding social justice reforms after the killing of George Floyd.

On Sunday, Trump retweeted a video of one of his supporters at a retirement community in Florida yelling “White power!” during what appeared to be an angry clash over the president and race among white residents in the community. He deleted the tweet about three hours after posting it, and a White House spokesman said Trump had not heard the man make the “white power” statement. Still, no one in the White House, including the president himself, condemned the sentiment.

In the video from the protest on Sunday in St. Louis, a barefoot white man dressed in a pastel pink polo shirt and khakis emerges from his marble mansion and appears to threaten protesters who are marching down a private residential street. A woman, also barefoot, stands next to him in a pair of black capri pants, with her finger on the trigger of a silver handgun she points at the protesters.

The protesters were participating in a peaceful march to the home of Lyda Krewson, the Democratic mayor of St. Louis, in order to demand her resignation after she released the names and identifying details of individuals who supported defunding the police. 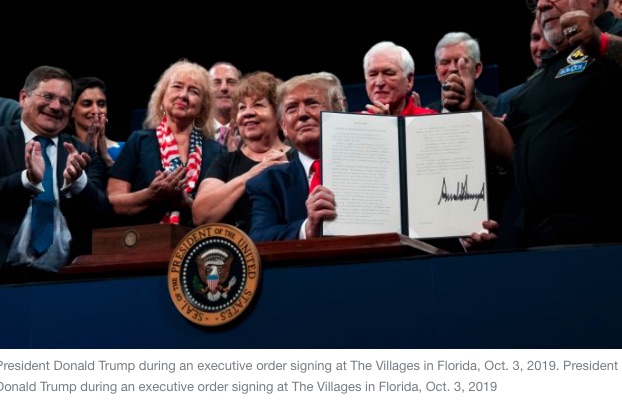 The group can be heard banging on drums and yelling to one another, “Keep moving!” as they walk past the couple threatening them with firearms. According to The St. Louis Post-Dispatch, the white couple in the video were identified as Mark T. McCloskey and Patricia N. McCloskey, both personal injury lawyers.

When reached at her home Monday night, Patricia McCloskey declined to address the episode.

“I’m in something right now,” she said. “Thank you though.”

The confrontation, which looked like something out of a Quentin Tarantino film, was captured on video and quickly drew more than 10 million views online.

Trump retweeted an ABC news link to a video and article about the scene. The White House did not respond to requests for comment about the president’s decision to promote the clip. But in the past, Trump has positioned himself as a strong defender of Second Amendment rights. He has also failed to distinguish between peaceful protesters, whose right to assemble is protected by the Constitution, and violent looters, some of whom were responsible for vandalism and fires that broke out during largely peaceful demonstrations across the country expressing outrage over the killing of Floyd in police custody.

On Monday, Trump wrote on Twitter: “Seattle Looters, Agitators, Anarchists and ‘Protestors’, are now refusing to leave the ‘CHOP’ Zone. They have ZERO respect for Government, or the Mayor of Seattle or Governor of Washington State! Not good!”

In an interview on “Fox & Friends” on Monday morning, the White House press secretary, Kayleigh McEnany, defended Trump’s decision to retweet the video of his supporters in Florida, even though it was pulled down after criticism from Republican lawmakers of the racist phrase “white power.”

“His point in tweeting out that video was to stand with his supporters, who are oftentimes demonized,” McEnany said. “So he didn’t hear that portion. He took it down. But he does stand with the men and women of The Villages,” the Florida retirement community where the clash apparently took place.

This article originally appeared in The New York Times.

COVID-19 is deadlier for black Brazilians, a...