Trump the victim: President complains in private about the pandemic hurting him

Callers on President Trump in recent weeks have come to expect what several allies and advisers describe as a “woe-is-me” preamble.

The president rants about the deadly coronavirus destroying “the greatest economy,” one he claims to have personally built. He laments the unfair “fake news” media, which he vents never gives him any credit. And he bemoans the “sick, twisted” police officers in Minneapolis, whose killing of an unarmed black man in their custody provoked the nationwide racial justice protests that have confounded the president.

Gone, say these advisers and confidants, many speaking on the condition of anonymity to detail private conversations, are the usual pleasantries and greetings.

Instead, Trump often launches into a monologue placing himself at the center of the nation’s turmoil. The president has cast himself in the starring role of the blameless victim — of a deadly pandemic, of a stalled economy, of deep-seated racial unrest, all of which happened to him rather than the country.

Trump put his self-victimization on public display Thursday in response to a Supreme Court ruling rejecting his claim of absolute immunity and permitting a New York prosecutor to see the president’s private and business financial records. 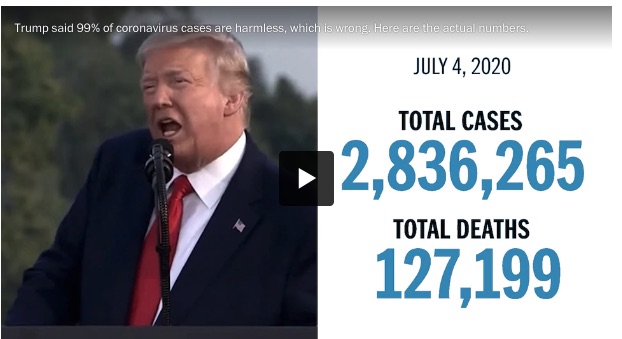 Trump reacted with a social media meltdown, writing on Twitter, “PROSECUTORIAL MISCONDUCT!” and “POLITICAL WITCH HUNT!” He wrote that the decision was “Not fair to this Presidency” and claimed that “Courts in the past have given ’broad deference’. BUT NOT ME!”

Trump has always exhibited a healthy ego and his self-victimization tendencies are not a new phenomenon, according to those who have known him over the years. But those characteristics have been especially pronounced this summer, revealing themselves almost daily in everything from private conversations to public tweets as the pandemic continues to upend daily life across America and threaten the president’s political fortunes.
Barbara Res, a former executive at the Trump Organization, said that when she worked for Trump, he interpreted nearly everything in deeply personal terms.

“Whatever bad happened, no matter what it was, it was always against him, always directed at him,” Res said. “He would say, ‘Why does everything always happen to me?’ ”

She added: “It was as if the world revolved around him. Everything that happened had an effect on him, good or bad.”

Now, however, Trump’s sense of victimhood strikes even some allies as particularly incongruous considering the devastation wrought by the pandemic and the pain and anguish apparent in Black Lives Matter protests.

More than 130,000 Americans so far have died of the novel coronavirus, with more than 3 million cases reported. Nearly 43 million Americans — more than a quarter of the labor force — have filed for unemployment benefits since the pandemic began. And the nation is riven not just by protests following the death of George Floyd, the unarmed black man killed in Minneapolis police custody, but also by a president who has deliberately stoked racial animus.

Even those in Trump’s orbit are trying to nudge him toward a sunnier, less egocentric approach to the crises he is facing, fearing that his sullen demeanor could backfire politically. Among those internally who have advocated a more optimistic tone are Alyssa Farah, the White House communications director, and Jared Kushner, the president’s son-in-law and senior adviser, according to one senior administration official.

Trump increasingly preoccupied with defending his physical and mental health

Other top White House advisers — including Hope Hicks and Dan Scavino — have also sought to buttress Trump’s mood with events they thought he would enjoy, such as celebrating truckers by bringing 18-wheelers onto the White House South Lawn in mid-April or creating social media videos that feature throngs of his adoring fans, according to aides.

Advisers also have sought to boost Trump’s mood by presenting him internal polling that shows him in a better position than public surveys, which universally show him trailing presumptive Democratic nominee Joe Biden.

One senior administration official rejected the notion that Trump views himself as a victim, saying instead that he has repeatedly expressed his frustration over a virus that seemed to emerge out of nowhere and has ravaged the country, and that his only concern is for the victims of the pandemic. A second official said that the president is most frequently speaking about how the country collectively has been victimized by the virus.

The first official added that Trump, as a former businessman, is especially well-suited for this unprecedented moment of crisis, and has demonstrated his management abilities by making the decision early on to shut down some travel from China and by waiving regulations to rush coronavirus therapeutics to the market.

“The United States of America did not ask for this plague and every American has been affected from the closure of our economy to caring for the sick and mourning those tragically lost, but under the leadership of President Trump our Transition to Greatness has already begun, and the American people are showing tremendous courage to defeat the virus, responsibly open the economy, and restore law and order to our streets,” White House spokesman Judd Deere said in an email statement. “The President’s message has been consistent: resilience, hope, and optimism.” 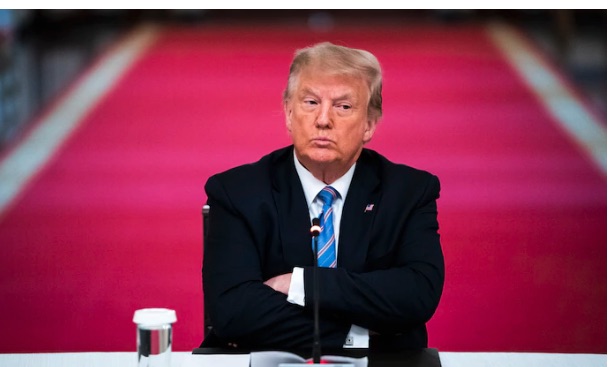 Jen Psaki, former communications director in the Obama White House, agreed with private assessments that the president’s complaining could be costly.

“I don’t think he has many sympathetic ears to his claims that he’s been mistreated,” Psaki said. “Leadership, as we’ve seen at many moments in history, is about not only accepting adulation when you do something great but also accepting responsibility. That lack of accepting responsibility is seen as a lack of leadership and that doesn’t sit well with people who might be more open to supporting him again.”

At times, though, Trump can’t seem to help himself, said people who have spoken with him in recent weeks, describing him as shellshocked and sullen about his declining fortunes even as he continues to insist he will ultimately win in November.

“We had the greatest economy in the world,” Trump said in an Oval Office meeting last month, talking about how good the statistics were before the coronavirus, said one adviser. An outside adviser in frequent touch with the White House offered a similar recollection, saying that Trump simply keeps on repeating, “I had this great economy and they made me shut it down.”

Another adviser who chatted with Trump about a month ago said the president opened with a lengthy rant expressing animus toward reporters — with Trump citing individual names of journalists and specific stories, particularly those about the coronavirus recovery. This person added that Trump also railed about pollsters being out to get him and deliberately sampling the wrong voters, and complained he was being blamed for protests that he had nothing to do with.

A third outside adviser in frequent touch with the White House said that in a recent conversation, the president seemed almost “inconsolable” and summed up Trump’s riff: Gripes about the great economy he built, now felled by the virus, and also how “some stupid cop in Minneapolis kneels on someone’s neck and now everyone is protesting.”

The president has also complained to political advisers that the media blames him for the protesters in the wake of Floyd’s death, and that no matter what he says, “it is not enough.”

To some of his longtime advisers, the president has seemed tired, low-energy and lacking the passion and energy that defined him when he was a candidate during the 2016 race. Aides noticed he largely read his script at Mount Rushmore and did not veer off the teleprompters for high-energy riffs like he usually does when delivering political speeches.

He has been spending an inordinate amount of time watching television news and has been scrambling for ways to fire up his base and keep his loyalists supportive, with little in the way of a set daily schedule.

“Every guy that talks to him, the first half of the conversation is, ‘Woe is me,’ ” said one of the outside operatives, speaking anonymously to share private details. “They’re all saying, ‘You’ve got to snap out of it. You’re the president. Presidents are supposed to deal with crises.’ But he’s fixated.”

Some officials and advisers, however, say they are encouraged that Trump in recent days has gotten into a more optimistic mind-set, where he sees a path to victory and is ready to work toward it. The president just approved a calendar through the beginning of August that includes coronavirus-focused events, economic events and, they hope, a return to regular political events. On Saturday evening, for instance, Trump will hold a campaign rally in an airport hangar in Portsmouth, N.H. 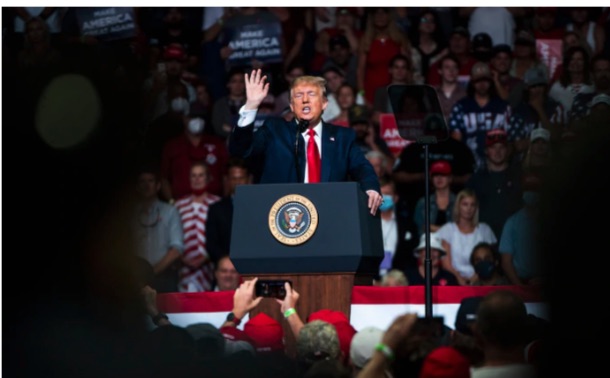 June was a tough month for both the country and the president, the senior official said, but Trump’s celebration in South Dakota in advance of July 4 represented something of an unofficial turning point, as aides hope the president will refocus on several top priorities.

The key themes for the coming weeks, the official added, are rebuilding the nation’s economy, continuing to fight the virus and continuing to secure communities, which will encompass the aftermath of the protests. There may also be some actions intended to show toughness against China.

The president’s mood had also improved as he focused on the fight over whether to rename or tear down statues named after Confederate generals and other controversial historical figures. Aides say he believes a battle over such symbols will help him politically.

Despite his bouts of moroseness, Trump can also exhibit optimism not entirely grounded in reality. He has continued to tell advisers, for instance, that he is certain the virus will go away by October and that there will be a “cure” by then — a word he favors over “vaccine.”

Then, he adds in these tellings, the economy will rebound overnight and he will win a second term.