To hear Trump tell it, he would’ve gotten away with everything had not been for those pesky Democrats. So if he wins the upcoming election in November, the president of people who put big-ass tires on little-ass trucks is going to immediately start working on how to run for a third term, because dictator.

Ignoring all kinds of social distancing rules, Trump told a bunch of maskholes (a maskhole is someone who refuses to wear a mask) in Nevada on Saturday that he wanted to serve three terms as president. Trump truly believes that he’s entitled to another eight years in the White House because his boo is Russian President Vladimir Putin, and Putin does what the fuck he wants.

“Fifty-two days from now we’re going to win Nevada, and we’re going to win four more years in the White House,” Trump told a crowd of at least 5,000 people in Minden, Nev., that was packed inside like a sleeve of Keebler Club Crackers. “And then after that, we’ll negotiate, right? Because we’re probably—based on the way we were treated—we are probably entitled to another four after that,” Slate reports.

Despite every poll in America—including Trump’s favorite OnlyFans station Fox News—showing that Trump is trailing Kamala Harris’ boss, the president of people who would rather catch the ‘Rona than wear a fucking mask claimed that the only way he could lose the election in November is if the Democrats rigged it.

“The Democrats are trying to rig this election because that’s the only way they’re going to win,” he said. Trump also called mail-in voting “the greatest scam in the history of presidential politics” and added, without proof, that Democrats are sending ballots “to dogs.”

“Everybody is getting ballots,” he said. “Probably everybody but Republicans.”

During his propaganda-laden speech on the tarmac of Nevada’s Minden-Tahoe Airport, Trump even went so far as to attack the state’s governor, Steve Sisolak, claiming that if Sisolak would try to prevent Trump from holding an indoor rally which violates the state’s social distancing rules, then he’d even be willing to rig the election. 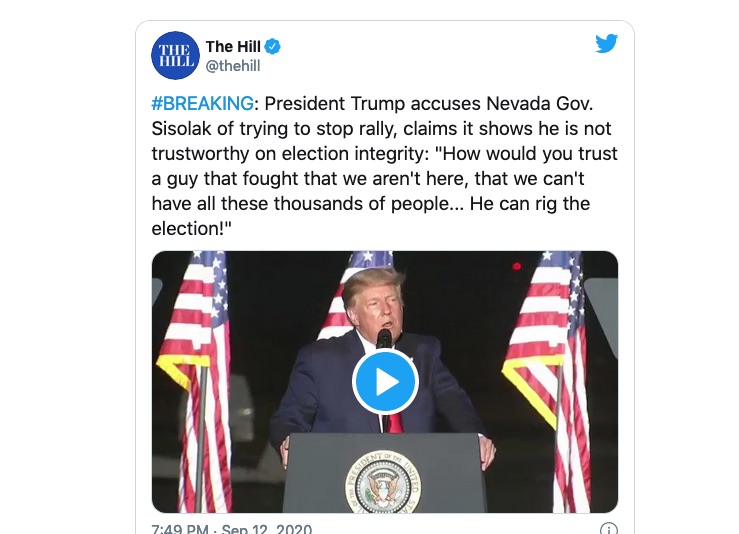 Senior Editor @ The Root, boxes outside my weight class, when they go low, you go lower.

A Judge Asked Harvard to Find Out Why So Many Black People Were In Prison. They Could Only Find 1 Answer: Systemic Racism

Ize-Iyamu’s Thinking About Governance Has To Change, Says Obaseki

Why African Americans MUST not allow Republicans...