Trump’s Racist Administration Terrorized  Me as an immigrant,  Blacks, and other Minorities Groups for 4 Year!!

When CNN declared Joe Biden as the 46th, president of the United States,  Van Jones a CNN host broke into tears of joy.. and I as an African Immigrant felt the same sense of relief that Van Jones and millions around the Globe felt. Finally, an end to the daily torment of the racist tweets, and the daily slogan of ” Send them back”.

Van Jones’s open display of Joy has become one of the most emotive responses to the announcement of Joe Biden becoming the new US president.

Jones later posted a clip of the moment on Twitter. 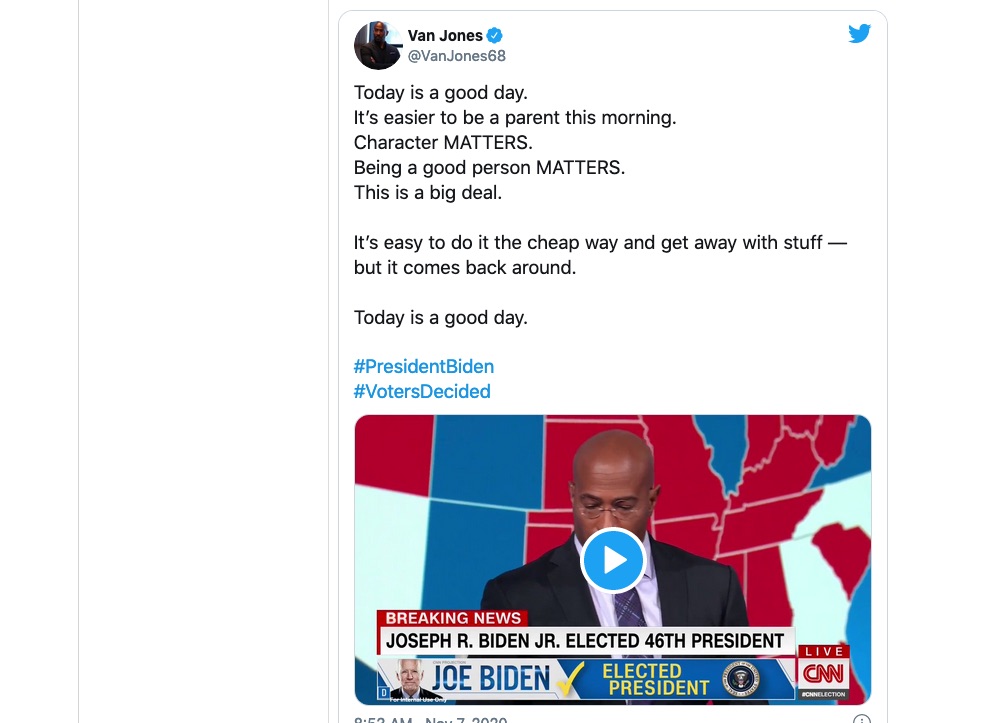 As an Immigrant from one of Trump’s so-called, “Shit holes Countries” I  felt a sense of relief, and once again, I started to regain my trust and love for my adopted country.  I have children and have lived most of my life in the United States.   Until 2016 when Trump was elected, I  have never doubt America’s love for me as an adopted child. I have always felt the love and acceptance, and in return, I  have given America all that I have to offer. For the past 30 years, I have created thousands of jobs, paid millions in taxes,  contributed to my community, and most importantly actively participated and uphold America’s most cherished institutions of the electoral system and open Democracy.

Once Trump became president, he called white supremacists “very fine people,” locked children in cages, and systematically sought to dismantle the Affordable Care Act, disregarding the millions of Americans who would be left without access to health care if he were successful.

Over the past four years, as a Black Immigrant, I’ve lived in fear for my safety and the safety of my children.  Trump administration’s overt messaged to several racist organization during campaign rallies made it clear that everyone in America who is not a natural-born white, Christian heterosexual male in relatively good health has been targeted by the policies of the Trump administration. So for Republicans that aided Trump for  4 years of terror, to suddenly turn around and demand that we accept Trump’s childish behavior due to his inability to accept defeat is laughable, to say the least.

There are now calls to reach out to Trump supporters to mend fences. Pop star Katy Perry encouraged fans to follow her lead and tell family members who voted for Trump that they are “here for them.” Political scientist Ian Bremmer encouraged Biden voters to reach out to Trump supporters to show empathy. Former Sen. Rick Santorum, who compared same-sex marriage to bestiality while holding office, urged Biden supporters to give Trump and his voters “space” to work through their feelings. These suggestions enraged me and will do nothing other than encouraged more Trump-like behavior in the future.

These calls for unity come from a place of privilege, and they’re coming from mostly straight, white, cisgender people who are financially secure. They may not have liked some of Trump’s policies, but they were not actively harmed by them. They likely never feared for their safety or well-being in Trump’s America. As an African-American, an immigrant, and a father I am aware of what Trump represents,  and what direction he would have taken America if he had won relection..

Millions of Americans, including some of my friends and family members who supported Trump, had four years to renounce his policies. Instead, they stood by him. They knew that Trump’s policies had a very real impact on my life, and they showed me time and time again that they did not care. According to Martin Luther King Jr. “In the end, we will remember not the words of our enemies, but the silence of our friends.” So for me and my family, we will forever remember the silence of Republicans and the Republican party for generations to come.

No, I Will Not Be ‘Reaching Out’ To Trump Voters, Now Or Ever. Here’s Why.

Trump has a plan to stay in...