A right-wing law professor, who lost the 2010 GOP primary to determine who would go up against Kamala D. Harris in the general election for California attorney general (a race Harris won), has written a bizarrely nonsensical opinion piece alleging that Harris, born in Oakland, Calif., 55 years ago, might not be eligible to run for vice president. There is no sane argument for this proposition; we do not, as he would have us do, inquire about the reasons why an American’s immigrant parents came to the United States. The country, as set forth in the 14th Amendment, has birthright citizenship. Period. (Why Newsweek chose to run such trash is beyond me. An editor’s note added later hilariously claimed that the op-ed wasn’t birtherism in the anti-Obama mold, but an “arcane” constitutional argument. It is not arcane; it is discredited and deployed, apparently, only against people of color and first-generation Americans.)

President Trump was asked at his Thursday news conference whether he believed that Harris, a U.S. senator, was eligible to be presumptive Democratic presidential nominee Joe Biden’s running mate. Just as Trump did regarding the first African American president, the president attempted to delegitimize the first African American female vice-presidential candidate. “So I just heard that, I heard it today, that she doesn’t meet the requirements,” Trump said. “I have no idea if that’s right. I would have assumed the Democrats would have checked it before she gets chosen to run for vice president. But that’s a very serious. . . . You’re saying that they’re saying that she doesn’t qualify because she wasn’t born in this country?” 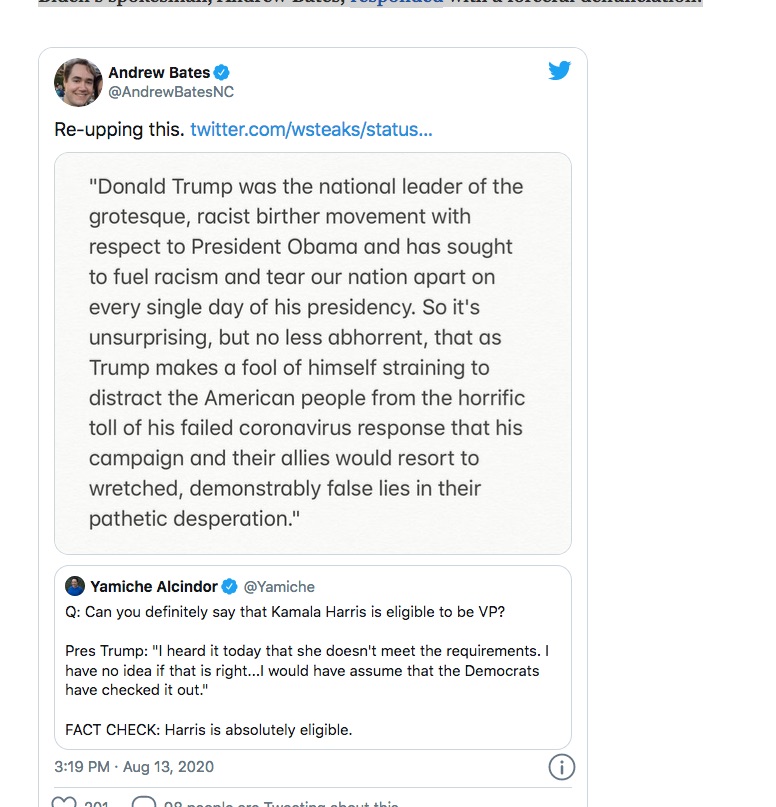 For accuracy’s sake, the media should stop referring to such insinuations “birtherism” and identify them accurately, as Bates did, as “racism.” Trump once more is trying to write out of U.S. citizenship an African American politician. As he did in 2016, he seeks to make Harris the “other,” an alien, and thereby reaffirm his devotion to White supremacy.In this case, Rep. Alexandria Ocasio-Cortez (D-N.Y.) had it exactly right. She tweeted:

When every first-generation American is automatically suspected of not being a “real” American, then only those with ancestry in the country dating back generations can be “real” Americans, those whose status is beyond question. That creates a country of citizens with long-standing roots in the United States and excludes tens of millions of Americans.

Well, Trump was just raising a question — that’s the traditional defense of Trump’s vile racism. This is how he always fans the flames of conspiracy theories (“People think . . .” or “I heard that . . .”). It’s akin to suggesting that hydroxychloroquine might work — who knows? — because somebody told him it might work, although his own administration experts have determined it is ineffective and can in some cases be harmful.

If Republicans had a speck of decency, they would never have nominated or elected Trump in 2016. Now that there is no legitimate question about his bigotry, his lying and multiple violations of his oath (from Ukraine, to defunding the U.S. Postal Service so he can disrupt an election), not to mention his rank incompetence in dealing with a virus that has taken the lives of more than 163,000 Americans and wrecked the nation’s economy, Republicans are full partners, wholly culpable for the same moral and constitutional outrages perpetrated by Trump. This is precisely why not only Trump but also the Republican Party must be leveled in November.

Coronavirus: How fast is it spreading in Africa?

Police killings have ‘exacted a trauma’ on...