Viewpoint: What it’s like to be an African in the US

As protests rock the US following the death of African-American George Floyd in police custody, Kenyan journalist Larry Madowo writes about the racism he has experienced in the country.

In my first week in New York City last summer, I was invited to dinner at a friend’s penthouse on the wealthy Upper West Side. I picked up some fruit for her and arrived at her building carrying a plastic bag. The front desk sent me through an open courtyard to the back of the building, past residents’ garbage bags and into a surprisingly dirty lift. When I got off upstairs, my host opened the door mortified, all the color drained from her face.

“My racist doorman thought you’re a delivery guy and made you use the service elevator,” she explained as she apologized. 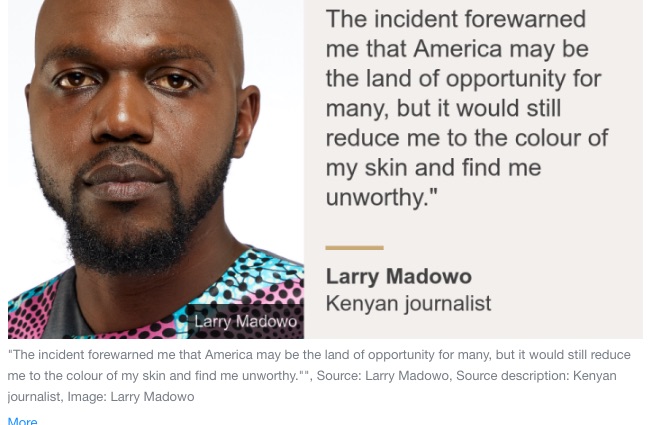 I have worked in the complicated racial hierarchies of South Africa and the UK and have travelled around the world, but it still stung that an American butler did not think accomplished white people like my friend and her husband could have a black dinner guest.

That early micro-aggression forewarned me that America may be the land of opportunity for many, but it would still reduce me to the colour of my skin and find me unworthy.

It did not matter that I am from a black majority African nation, people who look like me here have to negotiate for their humanity with a system that constantly alienates, erases and punishes them. 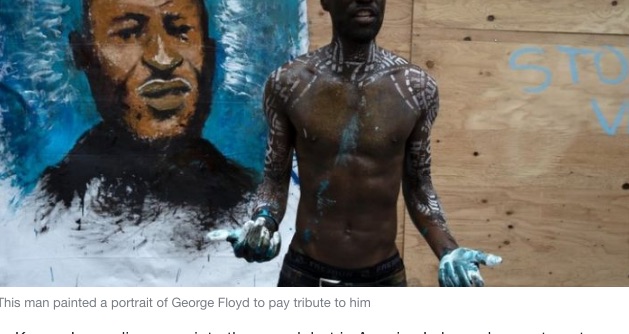 In Kenya, I may disappear into the crowd, but in America I always have a target on my back for being black.

A day after investment banker Amy Cooper called the police after a Harvard-educated black man asked her to follow park rules and leash her dog, a white policeman knelt on George Floyd’s neck for so long it eventually killed him. 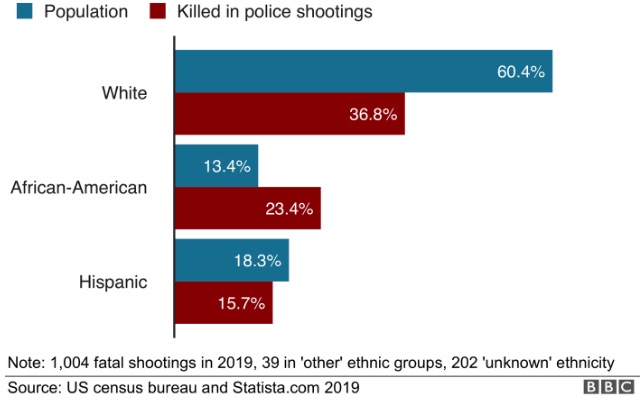 As protests broke out nationwide to demand justice for Floyd and the countless other black people who have been killed by police, I held my breath.

How could I grieve for someone I did not know? How could I own a pain I had not lived, as an African “fresh off the boat” in America? I wondered if I would be appropriating the African-American struggle at a convenient moment.

Then I saw a video shot at a protest in Long Beach, California, that was clear about allegiances.

“The best way that Africans in America can support African-Americans is to stand with us, and to understand that we’re all the same,” said a protester.

I asked Tom Gitaa – a publisher of Mshale newspaper, which serves African immigrants in the Midwest of the US – what he made of the protests, subsequent riots and looting that began in his city of Minneapolis.

“Many of us didn’t grow up with some of these civil rights issues in Africa so sometimes our understanding is not there.

“But with issues like police brutality and discrimination at the workplace, we’re running into a lot of the same things African-Americans have experienced over the years,” said Mr Gitaa, who moved to the US from East Africa about 30 years ago and whose American-born 24-year-old daughter has been one of the people making their voices heard on the streets. 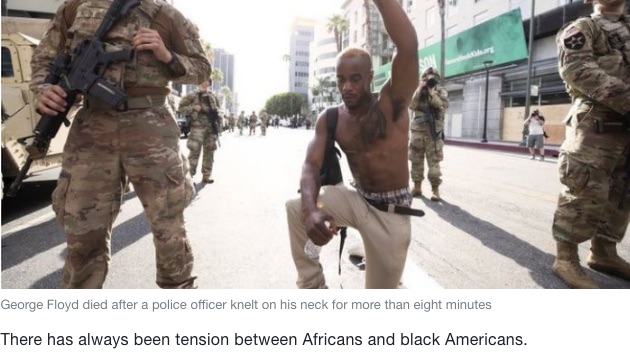 There has always been tension between Africans and black Americans.

My friend, Karen Attiah, and I unpacked some of it in The Washington Post two years ago when the superhero film Black Panther came out.

She is the paper’s Global Opinions editor, a daughter of African immigrants – born in the US, but deeply connected to her parent’s home continent.

Karen told me her parents are now discussing race and white racism specifically in a way she and her siblings did not hear while growing up.

“I think we were supposed to almost maintain a distance from black Americans because we were immigrants, we were different,” she told me this week.

“And now we understand that if a cop sees the colour of your skin, he’s not about to ask if you’re from Ghana or Nigeria or Zimbabwe, or Atlanta or the south side of Dallas, they just see a black person.”

African celebrities like actress Lupita Nyong’o and comedian Trevor Noah are using their powerful platforms to support the agitation for justice and to call out the hypocrisy in some of the criticism of the protests. 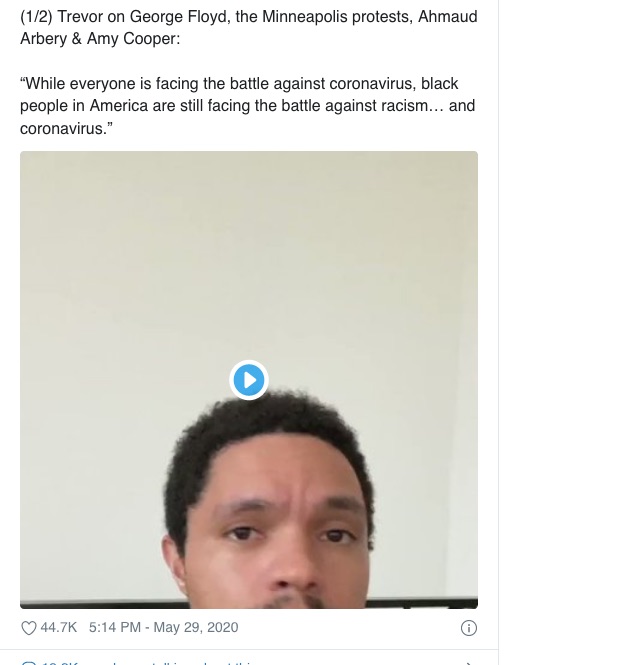 The African Union (AU) even released a rare statement condemning the death of Floyd, and asking the US government to “ensure the total elimination of all forms of discrimination”.

The first enslaved Africans arrived in the US – in the then British colony of Virginia – 401 years ago.

Last year, some of their descendants made the journey back to Africa to mark “the Year of Return” to where their forebears were stolen from four centuries ago.

One of the marquee events was the Afrochella Festival in Ghana last December, the brainchild of Abdul Karim Abdullah.

When I called, he was recovering from a long night after protests hit his home borough of The Bronx in New York City.

“A lot of Africans are ignorant to the fact that this is also their fight,” he said.

“Injustice to black people anywhere is injustice. We should stand up and fight together in solidarity.”

‘I moved to Ghana to escape US racism’

Africans in the US have marched alongside Black Lives Matter activists, supported protests against white supremacy, donated money to social justice causes and organized their own events to show unanimity in the black community.
‘Black men are most mistreated’

Protesters with African flags or with signs in languages from the continent have also been spotted at events in different parts of the US.

“People of colour, especially black men, are the most mistreated, misvalued and misunderstood community on this planet,” a tearful Jada Walker told a crowd of marchers outside the Dallas City Hall in Texas.

She worried about what awaits her two-year-old nephew who has special needs when he grows up.

“How is a cop going to treat him when he stands 6ft 8in like his father, is not communicative and looks like someone they’re looking for?” 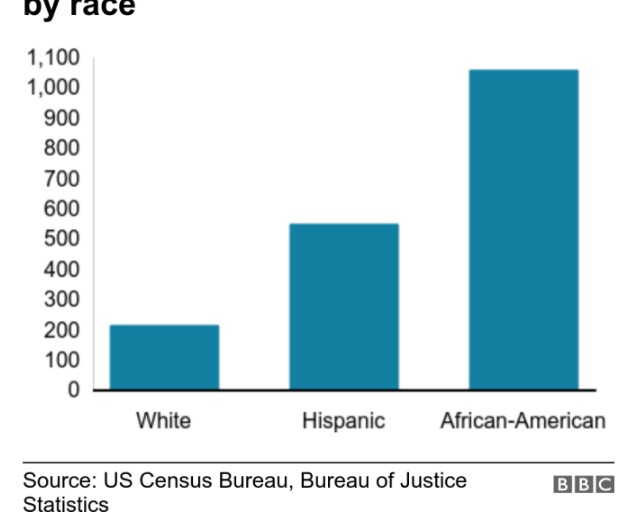 Because of the violent history of American policing for black and brown communities, parents are always on edge.

Ifrah Udgoon, a Somalia-born high school science teacher in Columbus, Ohio, lives with that fear for her 13-year-old son.

“Each passing day brings the realization that soon, if not already, he will go from being seen as cute to being seen as threatening. And my heart breaks for his innocence,” she wrote in South Africa’s Mail & Guardian.

Ms Udgoon captured a battle many other African immigrants feel: “I am expected to be grateful to be here. But have I sold my soul to the devil?”

“I checked in with black friends from Haiti, Benin and St Vincent and the Grenadines because discrimination has no nationality. Systemic racism affects us all.

“For a long time, I hadn’t realized it was an injustice until I started finding language for it. I’ve been pulled over, been through stop and frisk and racially profiled. This fight is my fight.” Mr Abdullah said.

It is not just his fight for African-Americans like him, it is a fight for the right to be black safely in America.

I replayed Karen’s voice note to me because she had a powerful conclusion: “I think right now what is on display is anti-blackness and it’s raising the consciousness about the connectedness of so many of our struggles, not the same but very much connected.”

Not Even Black Children are Safe from Police Brutality. The sad reality of American racism

The top Amazon lawyer who called a Black warehouse employee ‘not smart, or articulate’ calls for racial justice in leaked email

Meet the 4 Nigerian Teens Who invented...

Another injustice in the police shooting of...