What if Trump loses but insists he won?

On his present trajectory, President Trump is heading for a whopping defeat in November. The Economist says there’s nearly a 99 percent chance that Joe Biden will win more popular votes and around a 90 percent chance that he will win more electoral college votes. But what if Trump won’t concede defeat? That is a nightmare scenario for our democracy that could make the 2000 showdown over Florida’s hanging chads seem like a grade-school dispute by comparison.

Trump is already laying the foundation to dispute the election outcome with his incessant claims that “Mail-In Ballots will lead to MASSIVE electoral fraud and a RIGGED 2020 Election.” Election officials label such concerns as “preposterous” and “false.” But they will serve as an excuse for the Republican Party to purge voter-registration rolls, limit mail-in ballots, close polling stations in minority areas and challenge in-person voting by minorities. Whatever it takes to win.

It’s doubtful that anything Trump does will produce a popular-vote victory; he lost by nearly 3 million votes in 2016 and will probably lose by a greater margin this year. But it won’t matter if, by election night, he is within spitting distance of an electoral college victory.

I recently took part in a “war game” to see what would happen under those circumstances. The session was organized by the Transition Integrity Project, a nonpartisan group founded by Rosa Brooks of Georgetown Law School and Nils Gilman of the Berggruen Institute. The scenario we were given predicted a narrow Biden victory in the electoral college: 278 to 260. Various participants played the role of the Trump campaign, the Biden campaign, Republican and Democratic elected officials, the news media, and other key players to see what would happen next.

I was on Team Trump and, needless to say, we did not concede defeat. Instead, we went to work, ruthlessly and unscrupulously, utilizing every ounce of power at our disposal, to secure the 10 electoral college votes to swing the election. We focused our attention on three of the swing states that Biden won in our scenario — Michigan, Wisconsin and Pennsylvania — because, in all three, Republicans control both branches of the legislature. Normally, the governor certifies the election results, and in all three states, the governor is a Democrat. But there is nothing to prevent the legislature from certifying a different election outcome.

Something similar happened in the 1876 presidential election: Democrat Samuel J. Tilden was leading on Election Day in both the popular vote and in the electoral college, but the results were contested in three states. Congress appointed a commission to adjudicate the dispute, and it voted along partisan lines, 8 to 7, to hand all three states to Republican Rutherford B. Hayes. That gave Hayes a 185 to 184 majority in the electoral college, and the presidency along with it.

In our scenario, there was no congressional commission. Instead, the Republican Party bombarded the airwaves with claims of electoral fraud and insisted that Trump had been cheated of victory. The GOP filed suit to prevent the certification of the results. Attorney General William P. Barr, who in real life is already making specious claims about mail-in voter fraud, supported this effort in our mock exercise by claiming to have detected efforts by Chinese intelligence, Antifa terrorists and other enemies of the people to steal the election. The goal was to tie up the proceedings in the courts, initially at the state level, and quickly force the Republican-dominated Supreme Court to intervene.

While this was going on, chaos reigned in the streets, with pro- and anti-Trump activists mobilizing massive protests and violence erupting. Democrats believed that mass protests could force the government to respect the election outcome. But, as Team Trump, we calculated that such chaos would help persuade the Supreme Court to intervene to shut down the dispute. In 2000, even two of the more moderate conservative justices — Sandra Day O’Connor and Anthony M. Kennedy — voted to end Florida’s recount and hand the election to George W. Bush. Could we count on Chief Justice John G. Roberts Jr. — the current swing vote — to resist similar pressure to vote for the “home team”?

The danger of an undemocratic outcome only grows in other scenarios that were “war gamed” by other participants. For instance, what if there is no clear-cut winner on election night, with Biden narrowly ahead in the electoral college but with Michigan, North Carolina and Florida still too close to call? The participants in that war game concluded the result would be “near civil war in the streets.” Far-fetched rumors are enough to bring out armed right-wing militias today; imagine how they would respond if they imagined that there was an actual plot afoot to steal the election from their hero.

It is impossible to write off such concerns as far-fetched given how many seemingly far-fetched things have already occurred in the past four years.Trump got himself impeached by trying to blackmail a foreign country into helping his reelection campaign. He will stop at nothing to avoid the stigma of being branded a “loser.” Unless Biden wins by an electoral college margin that no one can credibly dispute, our democracy may be imperiled as never before. We had better start thinking now about how we would handle such an electoral crisis. 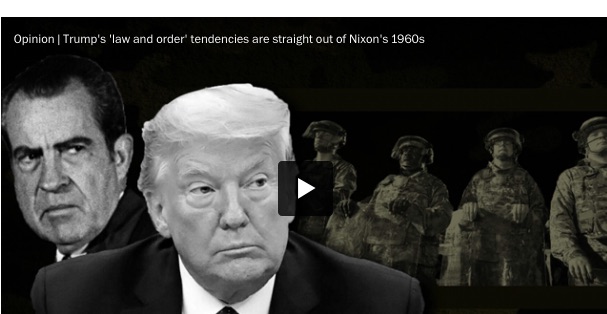